Joel Edgerton and Johnny Depp star in a scene from the movie “Black Mass.” (CNS photo).

Johnny Depp brings an intriguing blend of two-faced charm and menacing intensity to the central role. And the underlying values of this cautionary tale about the dangers of government collusion in wrongdoing are sound.

Yet, while the often harrowing bloodletting integral to director Scott Cooper’s film is generally surrounded with an appropriate sense of dread, a note of exploitative excess does creep in as the story progresses. Thus even those few moviegoers for whom it can be considered tolerable may ultimately judge this gritty journey through Beantown’s insular back streets offensive.

Bulger’s story – which Cooper marshals to convey a resounding admonition against using illicit means to achieve valid ends – would be hard to credit if it weren’t true. Motivated by a misguided sense of ethnic and neighbourhood loyalty, John Connolly (Joel Edgerton), a childhood acquaintance of Bulger’s in the Irish-American enclave of “Southie,” uses his position as an FBI agent to engineer a deal between the bureau and the initially small-time gangster.

According to the implicit terms of this corrupt bargain, Bulger will be given free rein to expand his underworld empire in exchange for information about his rivals in the Italian-American mafia.

For Connolly’s boss, Charles McGuire (Kevin Bacon), and his closest co-worker, John Morris (David Harbour) – both of whom, despite some ethical misgivings at the start, become willing accessories to the arrangement – the goal seems a straightforward one: Use the small fry to catch the big fish. For Bulger himself, of course, it’s an obvious win-win: Use the feds to destroy your enemies, and then take over their turf.

As Bulger’s uncontrollable barbarism causes events to spiral out of control, however, his rampaging ways threaten not only his G-men partners but his wily brother Billy (Benedict Cumberbatch) as well. An ostensibly respectable public figure who waltzes nimbly around his sibling’s shady reputation, Billy is a popular Massachusetts state senator. He’s also reputed to be the most powerful politician in the entire commonwealth.

Despite its indirectly religious title, and the unmistakably Catholic atmosphere in which its characters move, “Black Mass” devotes relatively little attention to faith.

We’re shown the fleeting image of a fatuous priest enjoying himself at a St. Patrick’s Day banquet where the Provisional IRA (to which Bulger has ties) is being praised. And Bulger sits silently in a church while brooding on his downfall. But otherwise religious expression is confined to the scenery.

So it’s not irreverence but rampant indifference to human life that may give even the heartiest ticket buyers pause.

NEW YORK (CNS) – Though the compelling sci-fi epic “The Martian” (Fox) is an unusually long movie, what viewers of faith may cherish most about this masterful adventure is a single line of dialogue in the form of a three-word prayer. 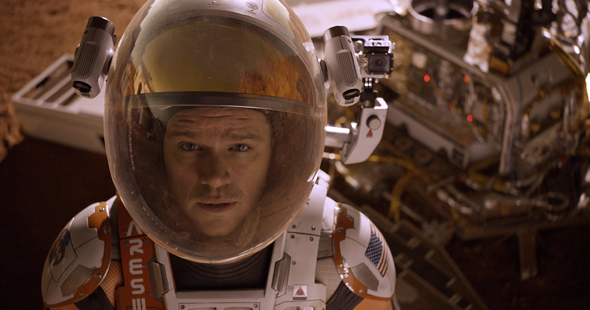 Matt Damon stars in a scene from the movie “The Martian.” (CSN photo).

Brief as it is, this one utterance – made all the more eloquent by the apparently casual tone in which it’s pronounced – represents a ringing affirmation of belief in divine assistance.

Few have ever needed the aid of providence more than the character who delivers this line, astronaut Mark Watney (Matt Damon). Because, by the time he offers his short plea to God, Mark is alone on the surface of Mars, more than 30 million miles away from home.

The film’s opening scenes recount the series of unexpected occurrences that led to Mark’s terrifying plight. The botanist on a NASA mission to the Red Planet – “The Martian” is set in a version of the near future where such journeys are more or less routine – Mark, like his colleagues, was forced to abandon his work on short notice due to the sudden arrival of a fierce windstorm that threatened to destroy their rocket.

As they all scrambled to depart, Mark was struck by flying debris and swept out of sight in the tempest, leaving his crewmates, led by conscientious Commander Melissa Lewis (Jessica Chastain), with no time to mount a rescue attempt. Back on Earth, NASA director Teddy Sanders (Jeff Daniels) delivered the bad news to the public, officially announcing Mark’s death.

Though Mark is, of course, alive – albeit wounded – his chances for long-term survival are bleak. He has only limited supplies of food, water and power – and no means of communicating with anyone.

As it charts Mark’s desperate struggle to turn his situation around, director Ridley Scott’s screen version of Andy Weir’s novel skilfully uses its protagonist’s dread-inspiring predicament to examine fundamental aspects of the human spirit: courage and ingenuity, the fear of isolation and the yearning for solidarity.

Along the way, screenwriter Drew Goddard’s script touches on religion only once more – and again just in passing. Yet the picture’s respectful, if incidental, treatment of the subject continues to draw power from its own understatement. The screenplay’s faith-affirming overtones also register as all the more pointed given the science-celebrating context which surrounds them – a setting in which such views might mistakenly be thought to be out of place.

Based on the fine quality of its values, at least some parents may consider “The Martian” acceptable for older teens – the elements of potential concern listed below notwithstanding.

The film contains some medical gore, a flash of rear nudity, scatological and other mature references, a couple of uses of profanity, at least one rough term and occasional crude and crass language. The Catholic News Service classification is A-III – adults. The Motion Picture Association of America rating is PG-13 – parents strongly cautioned. Some material may be inappropriate for children under 13.