Movie Review -  A car chase through St. Peter’s Square and a flippant joke about joining the priesthood aside, the 24th James Bond film, “Spectre” (Columbia), has predictably little to do with religion. Yet director Sam Mendes’ follow-up to “Skyfall,” his 2012 reboot of the 007 series, does set its protagonist on an upward ethical path that will please faithful grown-ups. 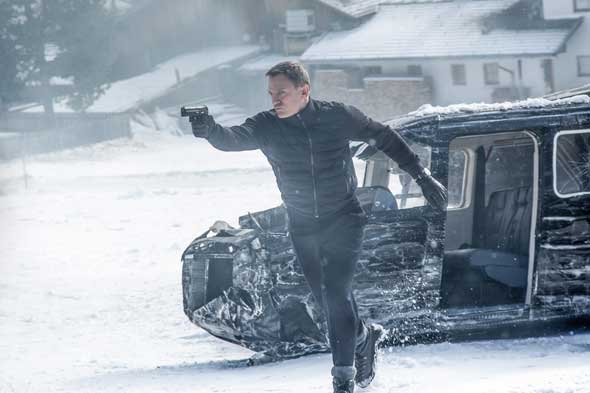 Daniel Craig stars in a scene from the movie “Spectre.” (CNS photo/Sony)

As for physical geography, novelist Ian Fleming’s iconic spy, played again by Daniel Craig, covers quite a lot of it. The globetrotting action antics entailed by his battle against the evil organization of the title take him from Mexico City on the Day of the Dead to the shores of the Tiber to the snowy expanses of Austria and on to the deserts of Morocco.

Along the way, Mendes supplies just the sort of satisfyingly large-scale set pieces moviegoers have come to expect from the franchise. And the time zone-defying trail leads on to a straight-from-central-casting Bond baddie. This veritable Aryan beast goes – sometimes, at least – by the name Franz Oberhauser (Christoph Waltz).

Armed with an intriguing alias and a surprising back story, both of which bind him intimately to our protagonist’s elaborate saga, and arrayed in an immaculate Austrian-style loden jacket, Franz seems to entertain but a single implicit regret. Namely, that he was born too late to be a Nazi.

As if Franz and his allies weren’t enough to keep 007 hopping, he’s also fighting enemies from within, chief among them the new head of British intelligence, Max Denbigh (Andrew Scott). In fact, assassin-averse Denbigh’s policies are so wrongheaded that they force 007 to go temporarily rogue as he pursues his crusade against Spectre.

Though his boss M (Ralph Fiennes) has been neutralized, for the nonce, by the bureaucratic infighting Denbigh has kicked off, Bond can count on behind-the-scenes help from tech whiz Q (Ben Whishaw) and from M’s secretary, Miss Moneypenny (Naomie Harris).

With their aid, he tracks Dr. Madeleine Swann (Lea Seydoux), the daughter of his old adversary, Mr. White (Jesper Christensen). Although White once served Spectre, he has since run afoul of the villainous group – with disastrous results. Bond hopes her dad’s sad fate at the hands of the no-goodniks will motivate Madeleine to assist him in his hunt.

As Bond discovers in the later stages of his cat-and-mouse pursuit, one consequence of operating on his own is the opportunity it gives him to flout not only procedure but law as well. Moviegoers committed to scriptural values will observe his response to this temptation with interest.

They will also note that Bond’s freewheeling sexual mores, typified here by his brief dalliance with Italian sophisticate Lucia (Monica Bellucci), have begun to be tempered by a longing for more lasting romance. As French writer Marcel Proust might put it, he’s headed Swann’s way.

Together with collaborators Neal Purvis, Robert Wade and Jez Butterworth, screenwriter John Logan tries to use the conflict between surveillance-loving Denbigh and mild privacy advocate M to warn against the dangers of an all-pervasive security state. But this political theme comes across as somewhat murky and out of place, a hurriedly tacked on afterthought amid the formula fun.

The film contains much stylised violence, a few harsher scenes involving torture and some gore, nongraphic but glamorized casual sexual activity, partial nudity, a couple of uses of profanity and a handful of crude terms. The Catholic News Service classification is A-III – adults.

Movie Review – The idea behind “Rock the Kasbah” (Open Road) is that cheerful, wisecracking show-business survival skills can overcome peril in exotic settings. 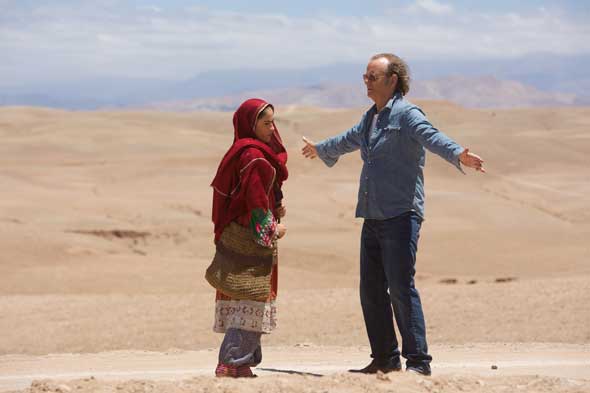 Leem Lubany and Bill Murray star in a scene from the movie “Rock the Kasbah.” (CNS photo/Open Road Films)

It’s a cherished old notion. Decades ago, it worked for Bob Hope and Bing Crosby in their “Road” comedies – films that portrayed any foreign culture the boys happened to pass through as inherently funny.

Such a dubious premise can hardly survive in a modern context. So it’s no surprise that director Barry Levinson’s story about fast-talking, down-on-his-luck music manager Richie Lanz (Bill Murray) – who’s off on the road to Kabul, Afghanistan, and having a wonderful time – reeks of all sorts of unpleasantly outdated thinking.

Screenwriter Mitch Glazer’s script trivializes the violent horror of war, for starters. It also stereotypes devout Muslims as latent murderers. And that’s not to mention the pervasive corruption of Afghan society whereby no one is willing to do the right thing without cynically demanding a percentage of the resulting spoils.

The first two items probably weren’t on Glazer or Levinson’s conscious agenda. But viewers won’t need an excess of political correctness to feel the jarring potholes along this bumpy journey – or to recoil from one-liners that land like dud shells.

Working out of a crummy motel-room office in Van Nuys, California, veteran manager Richie appears to have reached the end of his run, but refuses to admit it. “This is not forever,” he tells one of his clients, lounge singer Ronnie (Zooey Deschanel). “This is right now.”

Opportunity arrives with the offer to Ronnie of a USO tour in Afghanistan. Despite Richie’s assurance that Kabul is “like Aspen, only in wartime,” Ronnie is so horrified at the mere sight of turbaned men that, with the help of mercenary Bombay Brian (Bruce Willis), she quickly bolts from their hotel, taking Richie’s passport and all his money with her for good measure.

There, on a moonlit night, he hears the pure voice of Salima (Leem Lubany), a teenage Pashtun girl, singing “Trouble” by Cat Stevens (now Yusuf Islam). Surely this is fate?

Richie spends the rest of the film angling to have Salima appear on – and win – “Afghan Star,” the local version of “American Idol.” To do so, he has to tackle her conservative family as well as the cultural taboo against women singing in public.

He’s aided in these efforts by Merci (Kate Hudson), a goodhearted prostitute whose kindly nature doesn’t prevent her from demanding a considerable share of Salima’s winnings for herself.

“We have a saying,” Richie slickly informs a group of Muslim elders. “The Lord works in mysterious ways.”

Equally opaque, it might be pointed out, is the reasoning that led to this comedy’s existence.

The film contains scenes of drug use, verbal and visual references to sexual activity, fleeting profanities and frequent crude and crass language. The Catholic News Service classification is A-III – adults.