Our Lady of Guadalupe isn’t just a Mexican Tradition

The feast of Our Lady of Guadalupe has been a religious and cultural hallmark for Mexican Catholics for centuries, but the custom received little attention from Western Catholics before the last few decades. 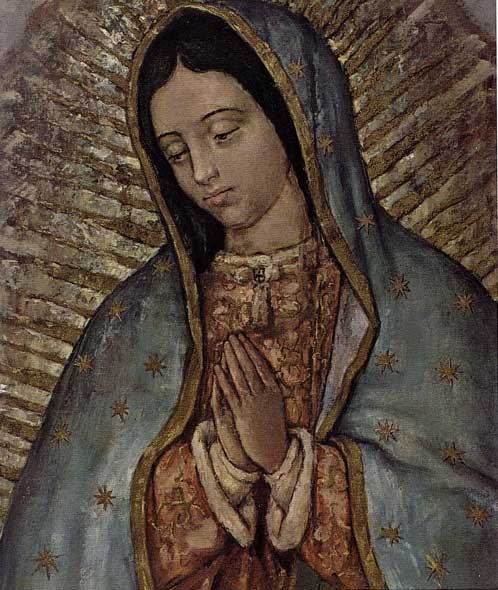 Both Pope Benedict XVI and Pope Francis have celebrated the feast of Our Lady of Guadalupe at St. Peter’s, signalling to Catholics worldwide it’s importance in the universal church

With the growing Latino population in the United States, the presence of Hispanics has steadily increased in Catholic churches throughout the country, creating a greater awareness of Our Lady of Guadalupe, the patroness of the Americas.

Catholic scholars say the significance of her feast day, Dec. 12, has risen beyond the Americas with the emergence of the Latin American church on the world stage.

The dark-skinned image of Mary, known as Our Lady of Guadalupe, also has been identified by leaders of the universal Catholic Church as the face of the new evangelisation.

The story of how Mary appeared to a poor Aztec Indian in 1531 near present-day Mexico City brought more than 6 million indigenous people into the Catholic faith within a decade.

The image of Mary dressed in a way Aztecs could relate to her is credited with more than evangelisation. It’s also an acknowledged factor in the easing of tensions between the native people of that region in the Americas and the European settlers.

Latinos living in the U.S. celebrate the feast of Our Lady of Guadalupe with zeal. 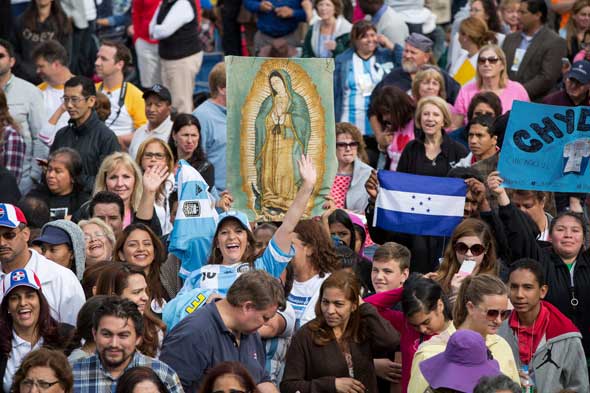 Their fervour for the feast day is a great example for Anglo Catholics, attracting more of them to the celebrations, said Archbishop Joseph E. Kurtz of Louisville, Kentucky, who is president of the U.S. Conference of Catholic Bishops.

When Mary appeared to St. Juan Diego, the Spaniards and Aztecs were on the brink of war, and scholars believe it would have been brutal. Many have suggested the result of such a war could have diminished Christianity in the region.

Instead, the apparition of Our Lady of Guadalupe brought an end to the Aztec’s worship of stone gods and the practice of human sacrifice, said Father Michael Witczak, an associate professor of liturgical studies at The Catholic University of America in Washington.

When the indigenous people embraced Catholicism, the religion of the Spaniards, the two groups discovered a way of living together in relative harmony, Father Witczak said.

“The story is captivating,” he told CNS. “That whole image of this 57-year-old Aztec Christian encountering this woman and not wanting to get involved with something he knew would be viewed with great scepticism. Yet, (the news) was eventually seen as a miracle that helped spread Christianity throughout the Americas.”

It’s a story that should enrich the faith of all Western Catholics, Archbishop Kurtz said.

Nevertheless, many Anglo Catholics either don’t know the story or understand the significance Our Lady of Guadalupe has in Catholicism.

Father Robert C. Irwin, pastor of St. Jerome Church in Jerome, Idaho, said he was unaware of the story of Our Lady of Guadalupe as a boy growing up in the U.S.

What he did know was that his friends with Mexican ancestry often paid homage to an image of Mary that didn’t look very much like the paintings of the Mother of God he had been accustomed to viewing during his religious education.

During his homily, the pope said the dark-skinned image of Our Lady of Guadalupe – traditionally believed to have been miraculously impressed on Juan Diego’s cloak – proclaimed to the indigenous peoples of the Americas “the good news that all its inhabitants shared the dignity of children of God. No more would anyone be a servant, but we are all children of the same Father and brothers and sisters to each other.”

Both Pope Benedict XVI and Pope Francis have celebrated the feast of Our Lady of Guadalupe at St. Peter’s, signalling to Catholics worldwide it’s importance in the universal church, Father Witczak said. 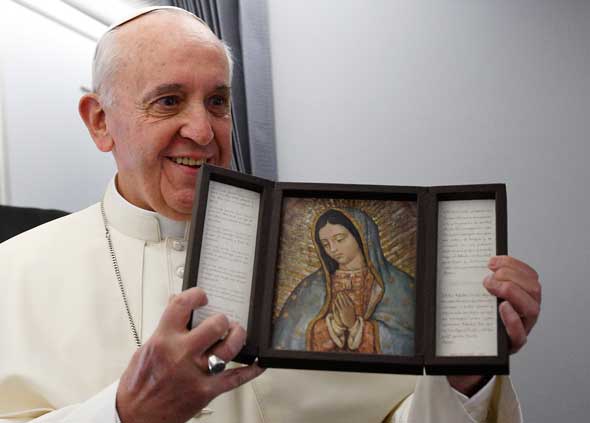 Pope Francis holds an image of Our Lady of Guadalupe aboard the papal flight to Brazil. The pope is deeply devoted to Mary and often expresses his devotion by praying in front of Marian statues and then gently touching them. (CNS photo/Paul Haring)

The message from the last two popes is also that Catholics throughout the Americas should draw inspiration from the apparition of 1531, that the Mother of God’s appearance in their land was a sign of its significance to God, Father Witczak said.

In his homily on the 2014 feast day, Pope Francis said Mary did not just want to visit the Americas, but that the image on the cloak, or “tilma,” was a sign that “she wanted to remain with them.”

Archbishop Kurtz pointed out that the current nations in the Americas didn’t exist when Mary appeared before St. Juan Diego, so when he shared her image on his “tilma,” he wasn’t just sharing it with the indigenous people in his region. He was sharing it with inhabitants throughout North America and South America.

“Of course it will always be perhaps especially dear to those families whose roots are in Mexico,” he said. “But, I have to say; their example of fervour and devotion touches the hearts of all of us. We have a great debt of gratitude in faith to the Latino people and, of course, to Our Lady of Guadalupe.” By Chaz Muth, Catholic News Service

Why Schoenstatt Gave Our Lady a New Crown