What would Archbishop Denis Hurley think of the centre next to Durban’s Emmanuel cathedral that is named after him? PADDY KEARNEY, the chairman of the centre, takes the late archbishop on an imaginary tour of the centre. 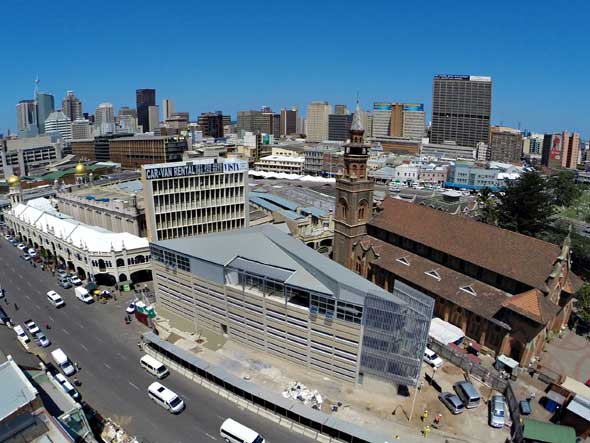 The Denis Hurley Centre, which will be officially blessed on November 9, with Emmanuel cathedral at its side and the mosque behind it. In this article, Paddy Kearney imagines taking Archbishop Hurley on a tour of the centre and believes the late archbishop would be pleased with what hed see.

Several people have asked me what I think Denis Hurley would feel about having a centre named in his honour.

One can only speculate about this, but my guess is that his first reaction would be one of embarrassment: he didnt make efforts to promote his own image. However, if he was taken on a tour of the Denis Hurley Centre he might warm to the idea. So lets set out on an imaginary tour with him…

First we would come to what is known as Cathedral Mall, the space between the cathedral and the Denis Hurley Centre, which we would like to rename Hope Square or Unity Square.

The city has undertaken to completely refurbish this area. The archbishop is keen to know what will happen to the informal traders, as it was his idea that they should use the mall to make a living hes greatly relieved to know that there will still be space for 20 traders and that they will have new, specially designed stalls. That really excites him. 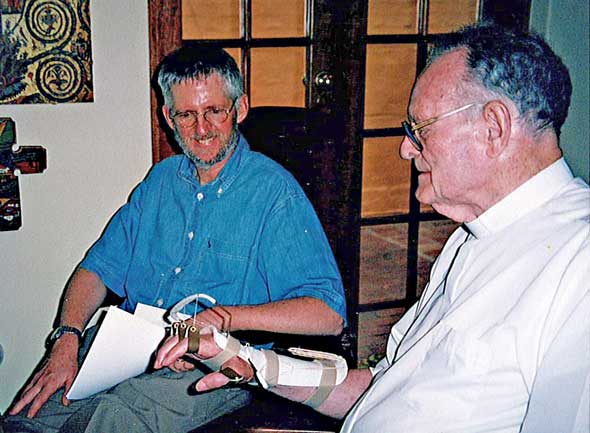 Archbishop Denis Hurley with Paddy Kearney, who wrote this article, in 1999.

He also understands why the new stalls will be portable so that they can be removed when the whole area is used for major community and inter-faith events.

We come to the foundation stone laid on February 13, 2014, the tenth anniversary of his death. He is happy to see the text, I have come that they may have life, life in all its fullness. He hopes the centre will help all those who come there to have that fullness of life.

In the foyer of the centre, he immediately sees the life-size bronze statue of himself in full episcopal robes. All his embarrassment returns about the very idea of a statue of himself given such prominence, until we draw his attention to what he’s holding out to all who come to this building: the decrees of Vatican II that he promoted from the end of the Council until the day of his death nearly 40 years later.

He is also delighted to find that all around his statue people are sitting, waiting to be helped. This is the social outreach floor of the centre, with a refugee office, clinic and feeding scheme. 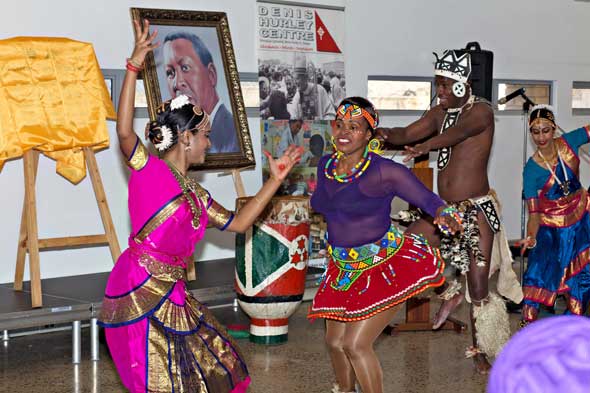 Dancers from the Suriya-Langa Dance Company at the opening of the centre’s Gandhi-Luthuli Peace Hall in July this year. (Photo: Helene Grung Light.Capture.Create)

Of course he asks who made the statue, and is highly amused and moved to discover it was a great-grandson of Paul Kruger, the late Reg Stroh!

Refugee Pastoral Care (RPC), situated on this ground floor, is surely very close to his heart, because it was he who began to assist refugees while parish priest of the cathedral in his retirement years from 1992 to 2002. He is astonished to learn that the RPC has helped more than 10000 newly-arrived refugees since those days.

At the Usizo L’wethu-Afrisun Clinic, also on this floor, he finds a waiting room bursting at the seams with all who have come for medical help, now more than 2000 a month.

A mobile clinic reaches out to people living in parks and on the streets, including whoonga-users at the Dalton hostel for migrant workers indeed the clinic’s efforts are like that field hospital which Pope Francis suggests as the role of the whole Church.

We pass on to look at the well-equipped kitchen where meals are being prepared for about 300 homeless and unemployed people. They also have an opportunity to shower and receive a change of clothing as well as counselling and life skills.

His eyes light up when he sees that Muslim and Christian volunteers work side by side in serving the poorest and most vulnerable of inner-city Durban. Nothing would make him happier.

Upstairs, on the first floor, we visit the large double-volume hall and stop at the portraits of Mahatma Gandhi and Albert Luthuli, two great promoters of peace in KwaZulu-Natal, in whose honour this hall has been named. Both are leaders whom he greatly admires.

Also on this floor he is delighted to visit St Augustine’s Cafe, which brings back nostalgic memories of St Augustine’s School which stood on this very site when he was a curate here in the early 1940s and where he taught catechism.

Bricks and air vents saved from the old parish centre, which housed the school, have been used to make the coffee bar counter and he glances with interest at the long list of those linked with St Augustine’s School who helped pay for the construction of the cafesome of his family members among them.

Further reminders of the old school are the handrails made from the staircase rails of the old parish centre; these can be seen on each floor of the central atrium, from which his statue can be seen from every floor.

When he hears that, embarrassment returns, so we wont dwell on the fact that he is central to all that happens in this building!

Next to the cafe he sees a computer room where 18 people are attending a course in computer basics, a collaboration between the World Changers  Academy just one of many mutually beneficial partnerships the Denis Hurley Centre is developing.

This too gets a nod from the archbishop who always believed that his great vision of the Church as a Community Serving Humanity defined that community in the broadest possible terms.

His concern about unemployment and increasing economic inequality are his major fears for the new South Africa and he challenges us with great concern to make them our top priority.

On the next floor there are meeting rooms and the archbishop has no difficulty in understanding why remembering the many organisations in the cathedral parish and the great need for spaces where religious education can be conducted on Sundays. Here too he is thrilled to see Sewing for Africa, teaching a useful skill to many people.

And so we come to the top floor of the Denis Hurley Centre, designed to be a meditative space, with its Prayer Room open to people of all faiths for reflection and prayer. 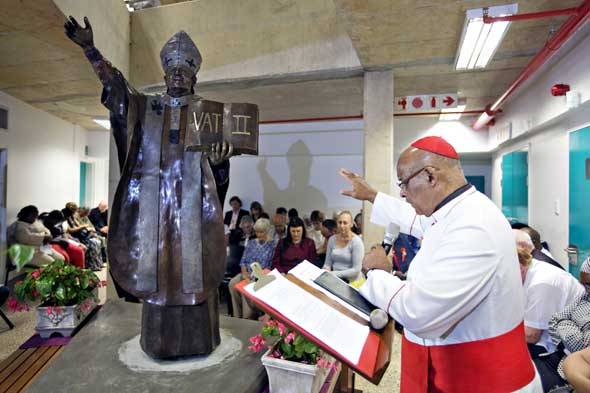 Cardinal Wilfrid Napier of Durban blesses the statue of Archbishop Hurley in the centre’s foyer. The archbishop probably would be amused and moved to know that the statue was made by a grandson of Paul Kruger.

He hardly needs to hear our explanation that in the same way as people of all faiths are served on the other floors of the building, so this space is available to all, and is not decorated or equipped for any one faith.

Right outside this prayer space is a therapeutic garden in honour of Archbishop Hurley’s close collaborator over many years, Mgr Paul Nadal.

A second hall, the same size as the Gandhi-Luthuli Peace Hall but sub-divisible into three separate

From one of these three rooms there is a splendid view of the golden domes of the Juma mosque, the cathedral’s closest neighbour. Archbishop Hurley was known to have prayed quietly in this mosque when he was parish priest at the cathedral, and Cardinal Napier has spoken at Friday prayers in that same mosque.

Hurley is deeply moved to hear that interfaith relations continue to develop in this extraordinary neighbourhood. Like his friend, Fr Hans Kung, he strongly believes that  there can be no peace in the world, without peace among religions.

It’s time to let the archbishop leave after his brief visit. He goes away, delighted by what he has seen yet with a blend of concern and hope.

His great concern, as was the case while he was stationed in this parish for the last ten years of his pastoral ministry, was the ocean of poverty that surrounded and still surrounds the cathedral and which constantly kept before his eyes the increasing economic inequality of South Africa, thought to be the worst in the world.

It was this that made him call for a powerful global interfaith movement to eradicate poverty and establish economic justice. He realised that there can be no lasting peace or stability in such an unequal society.

His hope would arise from what he has seen in this brief tour and from our assurance that a fully-fledged employment programme is to have pride of place in the centre, with some flashes of what is to come on a much greater scale, through the computer school, sewing classes and life-skills already being offered to the unemployed and homeless.

He tells us that his hope is greatly increased by the growing inter-faith collaboration that he has seen on this visit.

Our final words to him are: Dear Archbishop, pray for us at the throne of God as we seek to live out your legacy to be a community serving humanity and to give the poorest and most vulnerable an opportunity to have that abundant life that Christ has promised.

Paddy Kearney is the author of a comprehensive biography of Archbishop Denis Hurley, Guardian of the Light. The former director of the Diakonia Council of Churches worked with the archbishop for many years.