Samaria: Where Jesus Dared to Go

Ancient Samaria was hostile territory for Jesus, yet he went there. In the fourth part of his series on the recent Pilgrimage of the Peacemakers to the Holy Land, Günther Simmermacher takes us on a tour of the region.

You know the story well: on the busy road from Jerusalem to Jericho a man is robbed and assaulted. Three men of virtue pass by the injured victim without helping. Then a Samaritan comes and selflessly gives aid.

To Jesus’ listeners that parable was shocking. They expected to hear the story of the Bad Samaritan, because for the Jews of the time, the people of Samaria were the enemy, the dangerous Other of whom no good could be expected. 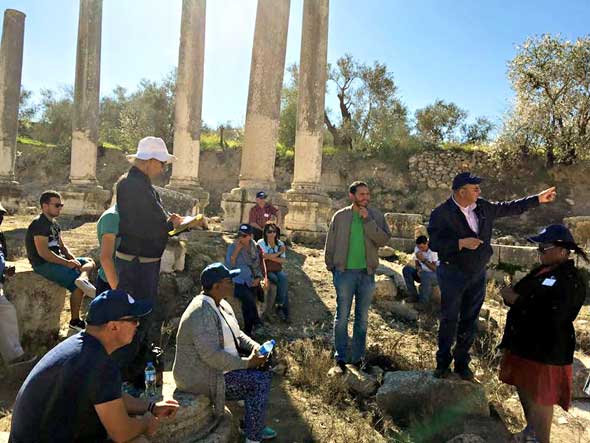 Today most of old Samaria is located in the West Bank, the territory Israel has illegally occupied since the 1967 war. After occupying the region, Israel planned to call it by its biblical name, Samaria, but the Palestinians rejected the idea.

In fact, the Palestinians might have had good cause to claim the name Israel themselves for the region, for this was its name almost 3000 years before the modern state of Israel adopted that name.

After Solomon’s first Kingdom of Israel split into two halves, the southern part — Jerusalem, Bethlehem and so on — was known as the Kingdom of Judah, while the northern kingdom, that of the Samaritans, took the name Israel.

The battles of Elijah with the prophets of the idol Baal and the story of Ahab and Jezebel who had turned from the one God to pagan worship are set within the context of that division.

That battle came to a head on Mount Carmel, which overlooks the modern city of Haifa, where Elijah vanquished the prophets of Baal in an extraordinarily bloody slaughter, returning the Kingdom of Israel to the worship of Yahweh.

But the people of the Kingdom of Israel, the Samaritans, continued to practise a separate form of Judaism, with their own temple on Mount Gerizim, near Nablus, the biblical Shechem.

The Samaritans believed that they were the custodians of genuine Judaism, arguing that the Jews of Jerusalem were practising a corrupted form of the religion after the Babylonian exile.

Even today there are a few hundred remaining Samaritans living on Mount Gerizim, which they believe is the original holy place of Israel from the time of Joshua’s conquest.

The Kingdom of Israel ceased to exist in 720 BC. There was no other Israel until 1948.

Today’s area of old Samaria is littered with checkpoints manned by the Israeli Defence Force, which occupies much of the West Bank. Tourist buses pass these without trouble. Still, not many pilgrimages include the holy sites of ancient Samaria.

This is a pity, since it includes the location of a very important story in the gospels: Jesus’ mid-day encounter with the woman at the well.

Picture the scene: Jesus is alone at the well, which was built by the patriarch Jacob, in a hostile land. He then asks the woman, whom he knows to be of compromised virtue, for water.

Jesus and the woman are at the well to draw life-sustaining water which our bodies need to function. But, of course, that’s not the whole story, for it is Jesus who is the living water.

And it is in conversation with a sinner that Jesus announces God’s plan of salvation which bridges the old sectarian division between Gerizim and Jerusalem.

Isn’t it marvellous how the most important announcements in the Gospel are made to the powerless and marginalised?

The angels announce the birth of the Messiah not to the mayor or the high priests, but to lowly shepherds, the dregs of society. The empty tomb is found by women, who were not even allowed to be witnesses in judicial trials. And here, at Jacob’s Well, a woman with five ex-husbands and a live-in lover is the primary recipient of the Good News of Christ.

Better yet, this woman spreads the word to the people of her community, and they are persuaded by her — a socially marginalised woman, pretty much as low a status as you could occupy in that time — that this foreign Jew is the Messiah.

The gospel of John is giving us the abbreviated version of the story. What made the testimony of this socially worthless woman so potent that people hostile to Judaism would believe that this Galilean Jew was the Messiah?

Jacob’s Well still exists, and The Southern Cross’ Pilgrimage of the Peacemakers, led by Archbishop Stephen Brislin in February, visited the place.

It is now in the crypt of a Greek Orthodox church in Nablus. Pilgrims don’t come here a lot, so a Muslim custodian, Jamal, unlocked the church for us. 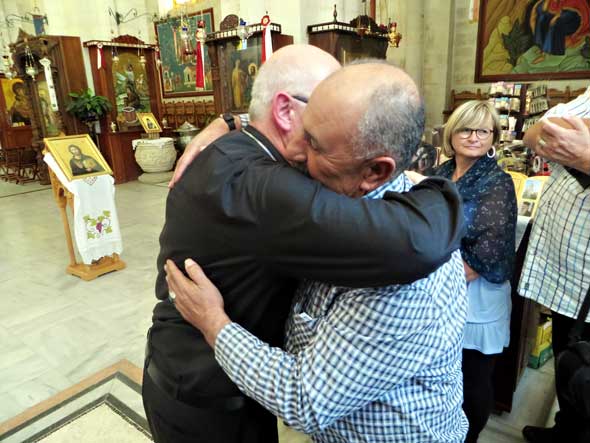 Jamal was pleased to see us. He presented the archbishop with a gift and gave him a big hug. It was a fine moment: A Catholic archbishop and a Muslim embracing inside a Greek Orthodox church. All we needed was a rabbi to join the scene.

We can be certain that this was indeed the place of Jesus’ encounter with the Samaritan woman.

The well was Shechem’s only source of water. Christian veneration here goes back to 333 AD at the latest, when the Bordeaux Pilgrim described a baptismal pool which took water from the well. And if a place was important to the story of our faith, and veneration goes back to the earliest time that churches were allowed to be built, then chances are good that this is indeed the authentic site.

The attractive church covering Jacob’s Well was completed in 2007, replacing an older chapel. That chapel was the site of tragedy.

In 1979 a group of Jewish extremists from an illegal settlement near Nablus murdered the Orthodox monk, Archimandrite Philoumenos, who was taking care of the holy site. Before he was killed, the monk was tortured in an unsuccessful effort to force him to renounce his faith.

The Israeli authorities knew the killers, but nobody ever stood trial for the murder. One of them, a US citizen, was quickly sent home.

It is not unusual for churches to be attacked by Jewish radicals, who rarely, if ever, are prosecuted for their crimes.

In Tabgha on the Sea of Galilee we observed the extensive damage from an arson attack committed in June 2015 on the Benedictine church of the Multiplication by Jewish terrorists (even their own government calls them that), which injured two people.

The last I heard, three people were charged with the crime; there is no news on a trial.

Another Samarian site worth a visit is Sebastia, previously known as the city of Samaria, with its ruins that span a period of 10000 years.

The city was destroyed by Alexander the Great in 331 BC, and again by the Maccabean leader John Hyrcanus in 108 BC. The Roman general Pompey rebuilt it in 63 BC and King Herod expanded it, renaming it Sebastia in honour of Emperor Augustus (Sebastia is the Greek version of his name). 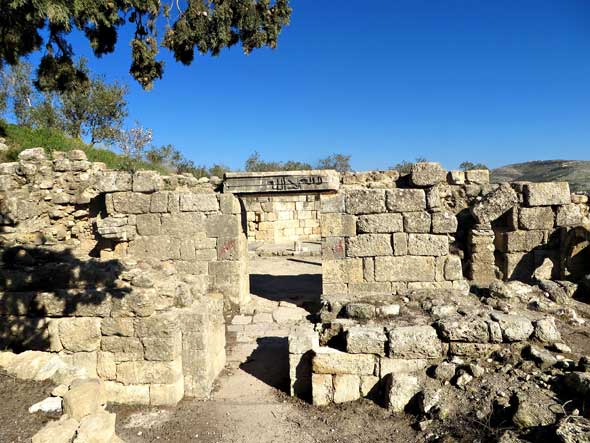 The ruins of a Byzantine church in Sebastia.

It is here that Herod had his wife Mariamne and two of his sons killed. And it is that Roman city in which the Apostle Philip went to preach so successfully that Peter and John were sent there to join him in evangelising the people (Acts 8:5, 14).

They would have seen a wealthy city, where King Herod built a pagan temple adjacent to the ancient palace of Ahab and Jezebel. The ruins of both, as well as those of the Roman city — the forum (where the apostles preached), colonnades, amphitheatre, shops — still exist. The Roman hippodrome is still waiting to be excavated.

Sebastia once held the remains of St John the Baptist, which were burnt in around 362 during the reign of Emperor Julian the Apostate. A Byzantine cathedral, later further developed by the Crusaders, was built to keep the urn of John’s ashes; it was the second-largest church in the Holy Land.

After the Islamic conquest of 1192 it became a mosque, dedicated to Nabi Yahya (meaning the Prophet John). That mosque, which has been remodeled over the centuries, is still in use.

A local tradition places the infamous banquet of Herod Antipas and the beheading of John in Sebastia, but historians place the execution at Machaerus, near the eastern shore of the Dead Sea, as recorded by first-century historian Josephus Flavius.

Still, the Byzantine Christians built a church on the acropolis of Sebastia, where tradition says John was beheaded, near to Jezebel’s old palace and the temple. The ruins of that church also still exist — defaced with anti-Christian graffiti by Jewish extremists when we visited it.

Our group of pilgrims saw many ancient stones, but our concern was also with the Living Stones: the Christians of the Holy Land.

A Christian pilgrimage should serve as a concrete sign of solidarity with that fast-diminishing community which feels it has been forgotten by the rest of the Church.

Our Palestinian brothers and sisters in faith depend on pilgrim tourism. Almost every Christian family has at least one member who works in the tourism industry.

So we were delighted to be spending a night in Taybeh, the last 100% Christian village in the Holy Land.

Jesus knew the village as Ephraim (the Ophrah of Joshua 18:23), and he went there with his disciples after the raising of Lazarus (John 11:54). 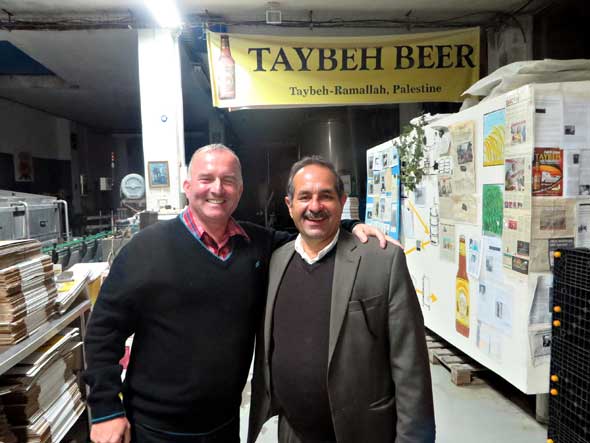 Günther Simmermacher with Nadim Khoury, founder of the Taybeh brewery.

The village—it was renamed by the Muslim conqueror Saladin—is clean and modern, with an attractive, brand-new hotel attached to a brewery which produces the outstanding range of Taybeh beers.

The hotel, the brewery and lately a winery are run by the Khoury family, Orthodox Christians who operated successful businesses in the United States but returned to Taybeh to help invigorate the village’s economy — despite the hardships and aggravation of the occupation.

In common with the Christian community of the Holy Land, the people of Taybeh, just over a thousand of them, see themselves as bridge-builders between the three Abrahamic religions, representing a vision of God’s people living together in peace.

Taybeh beer’s catchy slogan is “Taste the Revolution”— a revolution that is not one of conflict and conquest but of a vision of peace.

Günther Simmermacher is the author of The Holy Land Trek: A Pilgrim’s Guide, published by Southern Cross Books (order from www.holylandtrek.com). Join The Southern Cross on the Year of Mercy Pilgrimage to the Holy Land in October, led by Fr Larry Kaufmann CSsR. For details and illustrated itinerary see www.fowlertours.co.za/kaufmann