This Deacon Digs Graves and Prays for the Dead

Deacon Joe Kittok digs holes for a living. He spends an hour and a half several times a week removing about 4 cubic yards of dirt, which he takes to his 35-acre property in Delano and spills onto the ground. He gets $400 per hole, which adds up to a decent living. 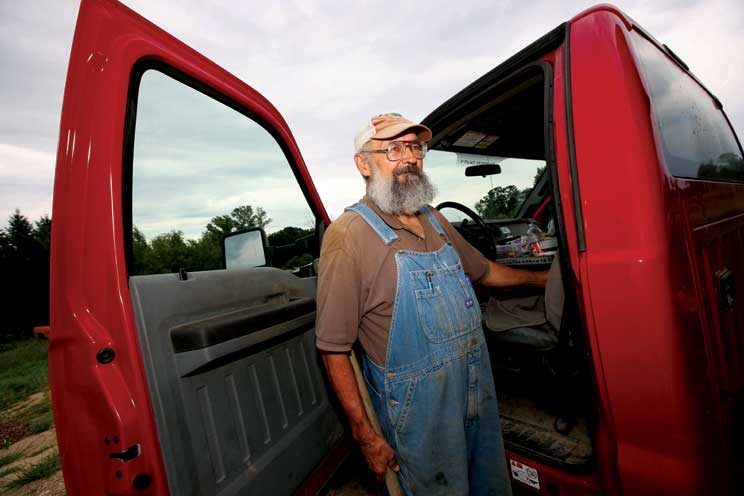 Deacon Joe Kittok stands outside his pickup truck Aug. 18 in Delano, Minn., as he unloads dirt excavated from a nearby cemetery. He estimates he digs about 300 graves a year in 30 cemeteries in Delano and surrounding communities. (CNS photo/Dave Hrbacek, The Catholic Spirit)

But, what makes his job special is not the holes he digs, but what goes into them. Or, rather, whom.

The 69-year-old member of St. Maximilian Kolbe Parish in Delano, who is married with three adult sons, is a professional gravedigger. He has been doing it for 44 years, and he now digs around 300 graves per year in 30 cemeteries in Delano and surrounding communities.

An important part of the process for him comes at the end, when he stands over the hole after the casket has been lowered and says a prayer for the deceased. It’s his way of carrying out one of the corporal works of mercy: burying the dead.

It’s also the fulfillment of a promise he made several decades ago to a parish priest, now-deceased Father Michael Tegeder, at Our Lady of the Lake Church, in nearby Mound.

“We sat down and had a little talk,” Deacon Kittok recalled, not sure exactly when the conversation took place. “I think we were waiting for a funeral. And he said, ‘You know, you’re in a perfect spot to make this your ministry and pray for these people at just the right moment when they might need it.’ I thought about that for all of about 20 minutes, and I decided that I would (follow Father Tegeder’s suggestion). … Every night now, I pray for every person I’ve ever buried.”

The total is somewhere in the thousands, though Deacon Kittok has never tallied the number of burials. Yet, he remembers the very first grave he dug, and the person who was buried there – Emily Brown of Delano.

“I can find it in that cemetery to this day,” he told The Catholic Spirit, newspaper of the Archdiocese of St. Paul and Minneapolis. “It’s a Delano public cemetery, and it was down by the river. It’s a beautiful setting.”

Details of his first digging job, back in January 1972, are still vivid in his mind. Freshly returned from two U.S. Army tours in Vietnam, he got off of work in the afternoon at a local plastics manufacturing company near the farm where he grew up a few miles from Delano, then headed to the cemetery in his 1969 Pinto. He brought a lantern, which he lit at dusk. He worked well into the night with the crudest of tools, finishing about six hours later.

“I bought three pieces of plywood and a wheelbarrow and a tarp,” he said. “I think I went and borrowed a shovel and a spade, and later bought those. I put a piece of old sofa cushion on top of the Pinto and put the plywood up there and tied it down, hauled it all out there.”

Perhaps it’s a job that could seem creepy, but Deacon Kittok finds deep spiritual meaning in the task and sheds tears when asked what it means to bury members of his community, many of whom he knows.

Each job begins with taking great care to excavate the dirt so as to provide the least amount of disturbance to the cemetery landscape. It ends with saying a prayer while he covers the vault containing the casket with the same dirt he removed.

This final act is an important part, even though family members might not notice him while he is standing at the grave waiting for them to leave after the burial rite. Nonetheless, they benefit from his service, as he puts earth back into the hole and prays their loved one into eternity.

“The burial is really the hardest, most challenging rite of all of them because it’s so final,” said Sister Fran Donnelly, a Sister of Charity of the Blessed Virgin Mary and director of LifeTransition Ministries at Catholic Cemeteries. “And, I think people don’t realise until they are standing there, and then they turn around and walk away.

How reassuring for these people to know that there’s somebody like Joe there to care for that hole in the ground, to fill it again and make it safe, to make it secure and then to be praying for the person besides.”

When asked to describe his ministry, Deacon Kittok simply says he’s glad to have “found my niche in life.”

“God wants us to be useful, and I enjoy doing this and I think I serve people justly,” he said.

In the past decade or so, Deacon Kittok also has presided at nearly 100 funerals and burial rites in addition to all of the graves he has dug. He said he feels he can offer a wealth of experience and compassion to those who are mourning. Yet, it isn’t necessarily nuggets of profound wisdom that people find comforting, he said.

“They just need somebody to listen,” he said. “Let them talk and you listen. … That’s about all you can do.

Deacon Kittok has no plans to retire. But someday, of course, his time will come and he will have to be on the receiving end of services he has performed for more than four decades.

“I tell people the story that I’m going to dig my own grave,” he said. “It’s right next to the road, so it’ll be really convenient at St. Joseph’s (Cemetery in Delano). It’s close to my parents and grandparents.” By Dave Hrbacek Catholic News Service