The aroma of fresh-baked spice biscuits fills the monastery bakery in Ferdinand. The Sisters of St Benedict claim this scent is truly “heavenly,” and with good reason. A saint wrote the recipe. 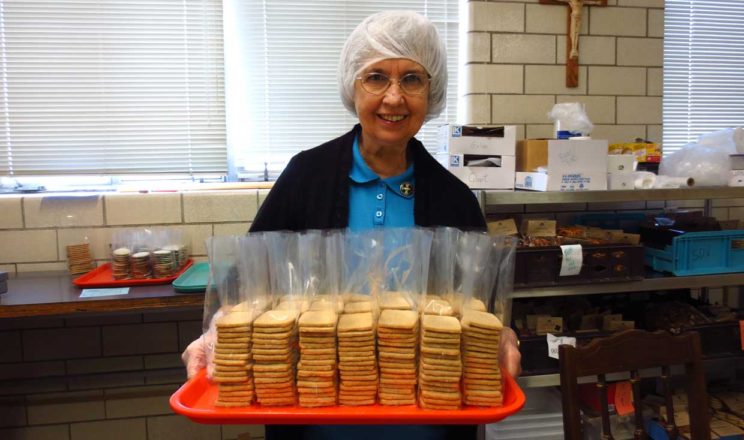 Benedictine Sister Romaine Kuntz carries a tray of finished Hildegard cookies Sept. 13 at a monastery run by the Sisters of St Benedict in Ferdinand, Indiana, in time for St. Hildegard’s Sept. 17 feast day. The popular product, baked from a recipe written by St Hildegard, is shipped to buyers across the United States. (CNS photo/Katie Breidenbach)

“It is attributed to St Hildegard,” explained Sister Jean Marie Ballard, manager of the bakery. “She says, if you eat three to five of these cookies on a daily basis, it creates a cheerful countenance, lightens a heavy heart and reduces the effects of ageing.”

St Hildegard of Bingen was a Benedictine abbess born in Germany at the end of the 11th century. She penned a recipe for “Cookies of Joy” in her medical work “Physica” sometime between the years 1151 and 1158.

Today, the Ferdinand sisters use that very recipe to create their best-selling product. In the last fiscal year alone, they baked 71,488 of the thin, golden-brown treats and shipped to buyers across the country.

“The Hildegard is one of my favourites. It makes you think of home,” said Sister Lynn Marie Falcony, a novice and one of the bakers.

The newest member of the kitchen, postulant Roxanne Higgins, adds, “They’re just flavourful because of all the spices, the cinnamon, the cloves, the nuts. It’s just a really flavourful cookie.”

The sisters sell baked goods to help support 144 community members and a dependent monastery in Peru. The product line includes “Prayerful Pretzels” and eight other kinds of cookies, including shortbread, ginger snap and the “springerle,” a traditional German cookie embossed with a design.

Set atop a hill overlooking the small town of Ferdinand, the Monastery of the Sisters of St. Benedict was founded in 1867. The sisters began making Hildegard cookies when they discovered the recipe nearly 20 years ago. 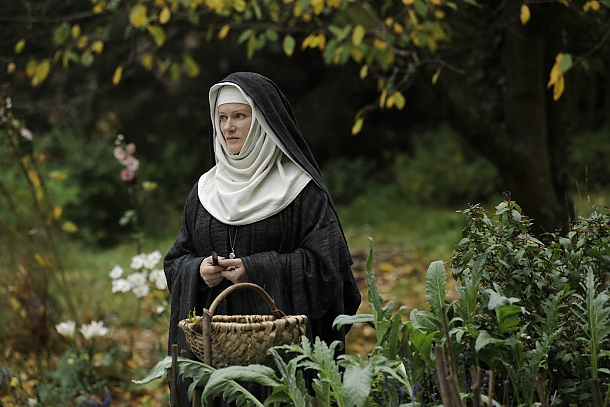 Image from the movie Vision: From the Life of Hildegard von Bingen

In addition to her cookie, St Hildegard wrote hundreds of other medicinal remedies. In many, the medieval saint attempts to cure ailments that she believed were caused by man’s failure to live in harmony with nature. Her assurance of interdependence predates the “integral ecology” found in Pope Francis’ “Laudato Si'” encyclical.

“My background is in chemistry,” explained Higgins, “(so) what really strikes me about her is her study of the medicinal properties of herbs and elements.” 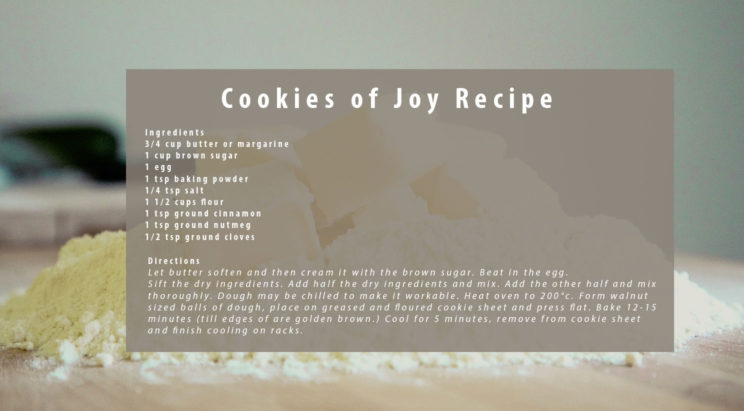 St Hildegard also is hailed as a mystic, prophetess, composer, poet and theologian. In 2012, Pope Benedict XVI formally declared Hildegard a saint and named her a doctor of the church. This title, which recognises that a person contributed significantly to church teaching, has been bestowed on only four women.

“I am inspired by her. She had so many qualities, she had so many gifts. She was just a great woman of the church,” said Sister Romaine Kuntz, who has been part of the Indiana monastery for 60 years.

The sisters have made a few changes to the saint’s original prescription. “Spelt,” an ancient grain common in the Middle Ages, is replaced by a combination of wheat and barley flour. Rather than a rolling pin, they use an electric bakery sheeter that passes the dough beneath a roll bar and presses it to an even thickness.

Though the technology has changed, the Benedictine tradition of prayer remains.

“We try and keep a pretty quiet atmosphere in our bakery so that our work and our prayer meet,” Sister Falcony said.

The sisters made about 4,000 Hildegard cookies leading up to her feast day, September 17. “She had an important message: Take care of yourself,” Sister Ballard explained. “It’s really hard to serve other people if we’re not in good health.” By Katie Breidenbach Catholic News Service