Father Engelmar Unzeitig died in the Nazi concentration camp of Dachau and was beatified last month. Fr Yves La Fontaine CMM looks at Bl Engelmar’s significance for our times in the Year of Mercy. 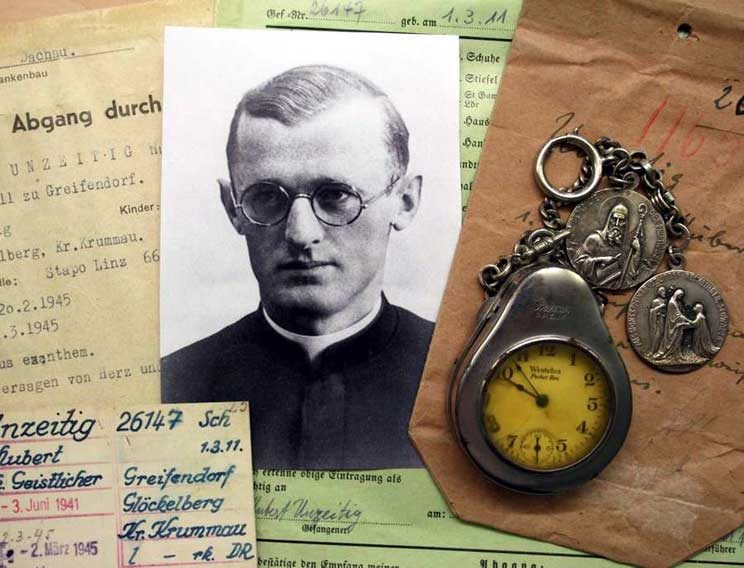 A photo of Bl Engelmar Unzeitig CMM and some of his possessions.The example of Bl Engelmar, who died in Dachau concentration camp in 1945, can give us guidance in how to live our God-given mission, writes his fellow Mariannhill Missionary Father Yves La Fontaine.

Mercy in hell — is this possible? When I watch TV reports on the massive destruction of the senseless war in Syria, read about human trafficking and modern slavery, see the awful and endless tragedies of refugees on my screen, I am distressed with indignation — as are many others. Then comes the question: where is God in our barbarian world? The same question was asked about the Nazi concentration camps.

Visiting the Auschwitz  death camp during his visit to Poland in 2006, Pope Benedict XVI said: “In the end, there can only be a dread silence, a silence which is itself a heartfelt cry to God: Why, Lord, did you remain silent? Rouse yourself! Do not forget mankind, your creature!”

Yet, in spite of such unspeakable deeds, as a newspaper said, there were angels there: God’s messengers! One of them was Fr Engelmar Unzeitig, a member of my religious congregation, the Mariannhill Missionaries, which was founded by Abbot Francis Pfanner in South Africa.

Fr Unzeitig was beatified on September 24. I have taken him as my “angel of God’s mercy”. Yes, an angel in the hell of Dachau!

This year’s celebration of Mission Sunday, on October 23, is permeated by the distinct light of the extraordinary Jubilee of Mercy. It invites us to consider our missionary task as “a great, immense work of mercy”.

We are all missionary disciples, asked to go out and generously offer our knowledge, creativity and experience in order to bring the message of God’s boundless tenderness and compassion to the entire human family.

Our Christian God is rich in mercy indeed. He wants us all to experience his love. But only a personal experience of his most generous tenderness will make us announce his mercy —”the beating heart of the Gospel”, as Pope Francis put in his document Misericordiae Vultus.

There is no alternative to this. It is there that we find our missionary mandate: in our being stirred to the depths of our beings by Christ’s mercy. Only then are we able to live it and make it known to all, whatever our situation, our capabilities or age — each one according to his vocation and in his or her way.

The greatness and power of our God reveals itself precisely in his capacity to identify with all in all situations without any distinction, especially with the marginalised, the poor and destitute.

He involves himself tenderly in our human reality just as a father and mother do in the lives of their children. It may even be better to talk of his motherly love, a love coming from the womb.

Words, words, words! This, in a way, is our world. But we would do well to remember that the most eloquent way to speak in our age is not in words but in actions.

Fr Unzeitig gave his all, his strength, talents, time and energy, willingly and joyfully, for the sake of others, the neediest in particular. In him we see a concrete image of our Mother-God’s extreme mercy.

Fr Engelmar feeds us in many ways with God’s abundant mercy. He was just 30 when he was sent to Dachau in 1941. His crime? He encouraged his parishioners to be faithful to God and to resist the lies of the Nazi regime, showing thus that he was in no way a racist.

He took the initiative to study Russian to be able to help the influx of prisoners from Eastern Europe. And when a wave of the deadly typhoid fever swept through the camp, he and 19 other priests volunteered to do the impossible: to nurse prisoners in the barracks affected by the epidemic, bathing and caring for the neediest, consoling them, praying with them and offering them the last rites.

This profoundly human and priestly response was an almost certain death sentence. Fr Engelmar died from this disease on March 2, 1945 at the age of 34. No wonder that he is called “the Maximilian Kolbe of the Germans”, but also the “Angel of Dachau,” and “Martyr of charity”.

His inmates bore magnificent witness to his holiness. One said of him: “He impressed me immediately, for he was radiating simplicity, humility and modesty as well as a constant inner joy.”

Another declared: “[He] was the personification of love. More I cannot say about him. That is what he was: Love!”

The treatment of the priests at Dachau was unpredictable. Sometimes they were allowed to worship; at others they were severely treated. On one particular Good Friday, dozens of priests were selected for torture to mark the occasion. One can only guess at the kind of unimaginable atrocity and horror he and others faced every day. Yes, Dachau was hell on earth.

How to explain then that Fr Engelmar did not become deeply depressed, even insane, in this inferno? He found sustenance in God’s own mysterious presence, in his tremendous faith in God’s goodness and in his service to the neediest.

Fr Engelmar was simple, humble and modest, and recollected. He was even innerly joyful! How could he applaud and acclaim God’s goodness and see everything as a grace while all that appeared around him indicated that this was the triumph of evil. His writings confirm this. He was a missionary at heart, blessed with a truly saintly life. He was a God-given gem!

In the light of these events we are faced with an inescapable challenge: are our hearts wide open to let that grace disturb, trouble, stir and foment the innermost depths of our life? It is useless to know and even admire a saint if we do not even come close to wanting this connection—and even wanting to imitate the saint.

As I am saying this, I feel terribly ashamed when I consider the compelling message of Pope Francis. He reminded us that we are all called to “go forth from our own comfort zone in order to reach all the ‘peripheries’ in need of the light of the Gospel”.

Are we willing to learn to “love as our God loves us and make of our lives a free gift, a sign of his goodness”?

For this to happen, we need to convert from the smugness, insensitivity, even indifference, in which we shut ourselves away in our contemporary world, with all its human misery and tragedy, situations that call for our personal involvement in acts of compassionate mercy.

Fr Yves La Fontaine CMM is a former superior-general of the Missionary Order of Mariannhill and the postulator of the cause for the beatification of its founder, Abbot Francis Pfanner.