As a sign of his closeness and concern, Pope Francis sent aid money to hurricane-stricken Haiti. 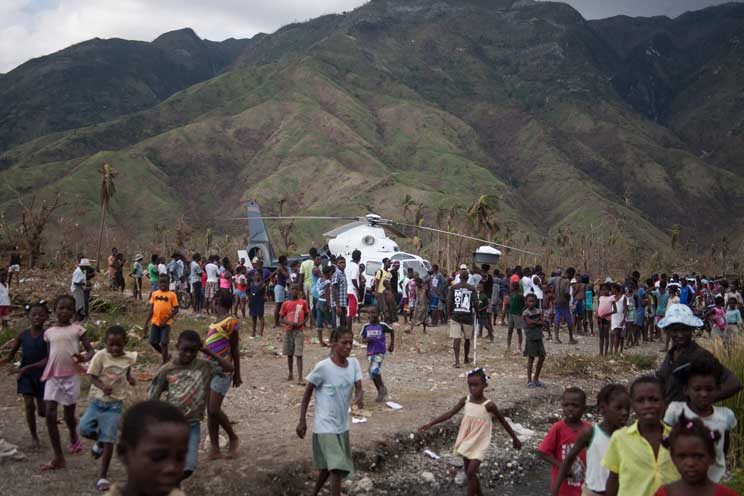 Victims of Hurricane Matthew walk towards an open area where an aid helicopter landed in Tiborun, Haiti. As a sign of his closeness and concern, Pope Francis sent aid money to hurricane-stricken Haiti, to be distributed through the hardest-hit dioceses to assist flood victims. (CNS photo/Bahare Khodabande, EPA)

An initial donation of $100,000 was sent through the Pontifical Council Cor Unum to be distributed through the hardest-hit dioceses to assist flood victims, the council said in a communique Oct. 14.

The first round of funding was meant to be “concrete expression of Pope Francis’ feelings of spiritual closeness and fatherly support for the people and places” that have been affected, it said.

The papal contribution is part of the church’s network of humanitarian aid, which includes help from different bishops’ conferences and numerous Catholic charities, it said.

Caritas Haiti, with the umbrella organisation Caritas Internationalis, launched its first appeal for emergency food aid and sanitation kits for 13,500 people as well as for providing counselling and education in preventing diseases, like cholera, which commonly affect areas lacking sanitation and clean water.

Thousands of Haitians have been displaced by Hurricane Matthew in the country’s southwest.

The number of deaths reportedly reached 1,000 on Oct. 9, five days after the storm’s 145-mile-an-hour winds and torrential rains slammed into the country, according to a tally by Reuters based on conversations with local officials. By Carol Glatz Catholic News Service

Pope Prays for Victims of Deadly Wildfires in Chile
Share

Tall Order: ‘You cannot be a Christian without practising the Beatitudes’

Meeting a pilgrimage of Catholics and Lutherans from Germany, Pope Francis said he does not like "the contradiction of those...