Defending religious freedom, fighting indifference to attacks on human dignity and promoting care of creation are obligations that Orthodox and Catholics share and areas where Pope Francis said he and Ecumenical Patriarch Bartholomew of Constantinople are in deep harmony. 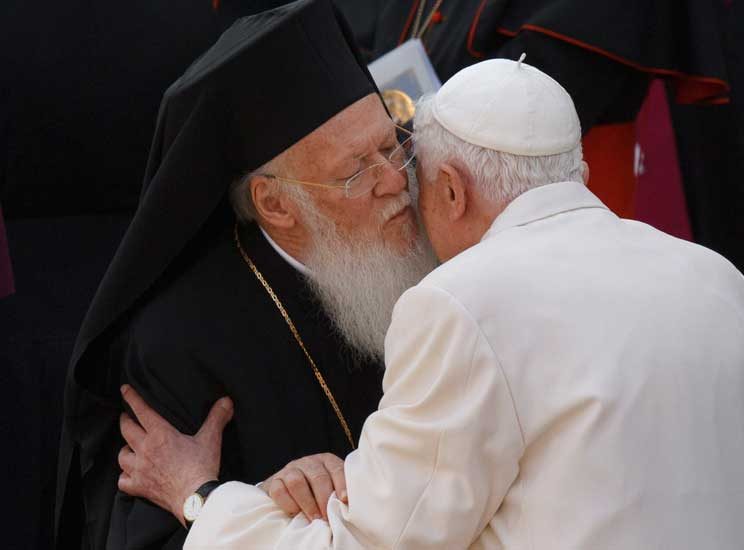 Ecumenical Patriarch Bartholomew of Constantinople and Pope Benedict XVI embrace during a 2011 interfaith meeting for peace outside the Basilica of St. Francis in Assisi, Italy. (CNS photo/Paul Haring)

In anticipation of the Nov. 2 celebration of the 25th anniversary of the Orthodox patriarch’s election, Pope Francis and retired Pope Benedict XVI joined a group of religious and civic leaders in contributing to a book, “Bartholomew: Apostle and Visionary,” published by the U.S.-based Thomas Nelson.

In many meetings, Pope Francis wrote, the two “have not only strengthened our spiritual affinity, but above all have deepened our shared consciousness of the common pastoral responsibility we have at this point in history before the urgent challenges that Christians and the entire human family face today.”

At their first meeting, in March 2013, Pope Francis said he felt he was encountering someone “who in his person and his manner expresses all the profound human and spiritual experience of the Orthodox tradition.”

The relationship has grown and deepened both personally and on the level of their ministries, the pope said. “The church of Rome and the church of Constantinople are united by a profound and longstanding bond, which not even centuries of silence and misunderstanding have been able to sever,” Pope Francis wrote.

Building on the work of their predecessors, the two leaders have “the sacred task of tracing our way back along the path that paved the separation of our churches, healing the sources of our mutual alienation and moving toward the re-establishment of full communion in faith and love, mindful of our legitimate differences, just as it was in the first millennium.”

Pope Francis said he has learned much from Patriarch Bartholomew’s long study and teaching on the Christian obligation to care for the environment, and he said the two share a Gospel-based commitment to working for “a world that is more just and more respectful of every person’s fundamental dignity and freedoms, the most important of which is religious freedom.”

In working for a world where love and solidarity play a greater role, Pope Francis wrote, “we are both aware that the voices of our brothers and sisters, now to the point of extreme distress, compel us to proceed more rapidly along the path of reconciliation and communion between Catholics and Orthodox, precisely so that they may be able to proclaim credibly the Gospel of peace that comes from Christ.”

In his contribution to the book, retired Pope Benedict said he first met the patriarch in 2002 as they were traveling with St. John Paul II on a train to Assisi, Italy. “The patriarch had invited me to sit with him for a while in the same compartment and, in this way, to become personally closer.”

Meeting “along the way” was not accidental, the retired pope wrote. With the patriarch’s knowledge of theology, cultures and languages, “his thought is a journey with others and toward others, which certainly does not degenerate into a lack of direction, in which ‘being on the road’ would simply lead nowhere.”

“Deep-rootedness in faith in Jesus Christ, the son of the living God and our redeemer, does not stand in the way of openness to the other, because Jesus Christ bears in himself all truth,” Pope Benedict wrote.

Referring to Patriarch Bartholomew as “this great man of the church of God,” Pope Benedict also praised “his love for creation and his advocacy that it be dealt with in accordance with this love, in matters big and small.”

Pope Benedict said he was pleased that even after he resigned in 2013, “the patriarch has remained ever close to me personally and has even visited me in my little cloister. In many places in my apartment can be found memorable items from him. These items are not only endearing signs of our personal friendship, but also signposts toward unity between Constantinople and Rome, signs of hope that we are heading toward unity.” By Cindy Wooden Catholic News Service