This Week’s Editorial looks at disunity in the very heart of the Church.

The unity of the Catholic Church is shaken when a small group of cardinals publicly insinuate that they believe the pope may be acting in error. 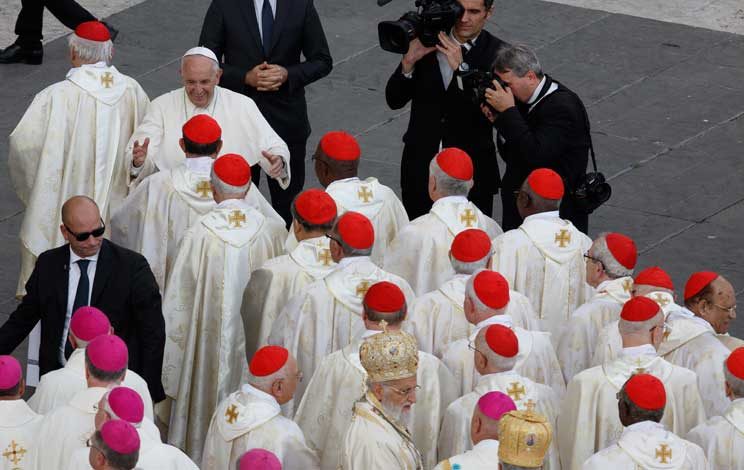 Pope Francis greets cardinals and bishops after celebrating the closing Mass of the jubilee Year of Mercy in St. Peter’s Square at the Vatican. (CNS photo/Paul Haring)

In September, three retired cardinals and one cardinal who had been moved out of the Vatican curia by Pope Francis sent the Holy Father a communication called a dubia (Latin for “doubts”).

In the letter they said that the pope has created “confusion” and “disorientation” with passages in his apostolic exhortation Amoris Laetitia that address the possibility of divorced and civilly remarried people being admitted to Communion, and issued a set of questions for the pope to respond to.

Amoris Laetitia is the document in which Pope Francis gave form to the deliberations of the two-year Synod of Bishops on the Family, held in 2014 and 2015.

On the issue of Communion for divorced and remarried Catholics, Pope Francis affirmed the teaching that they are generally excluded from the Eucharist, but counselled an approach of case-by-case discernment, giving dioceses the autonomy to admit people in “irregular situations” to the Lord’s Table, provided that certain circumstances apply.

Other than the deposits of faith and infallibly declared dogma, teachings and disciplines of the Church may be scrutinised.

While a synod cannot achieve consensus on all issues under discussion, and less so on a subject as controversial as this, there seems to have been no suggestions from the synod fathers that Amoris Laetitia distorts the collegial deliberations.

Indeed, more than almost every post-synodal exhortation since the introduction of the Synod of Bishops in the 1970s, Amoris Laetitia reflects the spirit of collegiality which the Second Vatican Council envisaged.

This does not mean, however, that Amoris Laetitia is now beyond discussion. Other than the deposits of faith and infallibly declared dogma, teachings and disciplines of the Church may be scrutinised. And as a document of mid-ranking authority, an apostolic exhortation carries less doctrinal weight than, say, an encyclical.

So when retired Cardinals Walter Brandmüller, Carlo Cafarra and Joachim Meisner, and Cardinal Raymond Burke, the present head of the Order of Malta, asked the pope to clarify aspects of Amoris Laetitia, they were well within their rights to do so. Cardinal Burke has long been a fierce and outspoken critic of this pontificate, and the other three cardinals come from the rigorist tradition which the pope has vigorously criticised.

Pope Francis decided, as is also his right, not to engage with the four cardinals’ dubia. It may well be that he suspected that these cardinals were not simply posing legitimate questions in a spirit of sincerity — even if the concerns stated in their query are shared by many Catholics — but were issuing a direct challenge to his authority.

Cardinal Burke has long been a fierce and outspoken critic of this pontificate, and the other three cardinals come from the rigorist tradition which the pope has vigorously criticised.

In absence of a response from the Holy Father, the four cardinals made their private communication public.

This caused division between those who were scandalised by what they saw as an attack on the pope, those who agreed with the four cardinals, and those who were disappointed that the pope declined to engage with the dubia. Cardinals owe a special loyalty to the pope.

Cardinal Burke then overstepped the mark by saying that the four cardinals may issue a “formal act of correction of a serious error”.  In plain language, the cardinals are saying that Pope Francis — the head of magisterium of the Catholic Church — is proposing a pastoral approach that is in violation of Church teachings.

This is a very serious charge indeed. In modern times, making the threat of “correction of a serious error” against a pope is unprecedented. The last time this happened was in 1334. Even among those who agree with the points raised in the dubia, there are those who see Cardinal Burke’s threat as an act of rebellion.

Cardinals owe a special loyalty to the pope. Their function — their specific job description — is to advise the pope. It is not the task of cardinals to publicly question the pope’s fidelity to Church teachings. By sowing division and by overstepping the boundaries of their office, these four cardinals have caused scandal.

It is legitimate to query the provisions in Amoris Laetitia, but this must come from serving bishops (who may also be cardinals), preferably with the collegial backing of their bishops’ conference, and expressed with sincere intent in the pursuit for truth.

Wherever one stands on the pastoral approach proposed by Pope Francis, it can never serve Our Lord to turn his Table into a battleground of ideology.