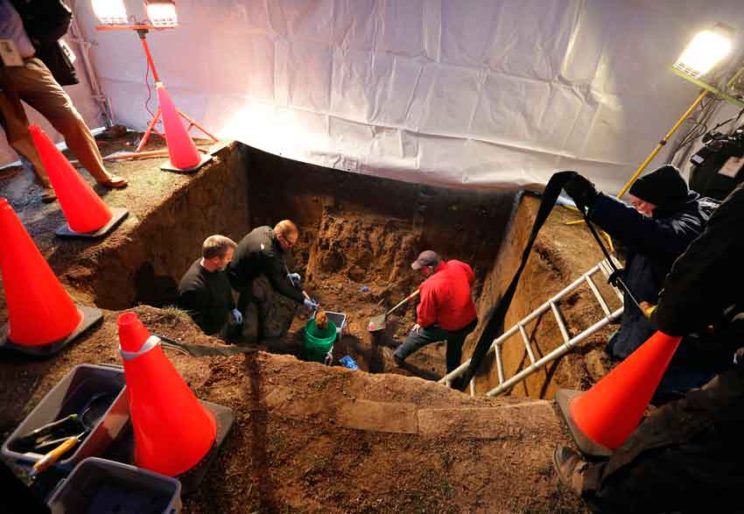 On the morning of Dec. 10 in a cemetery in Quincy, Father Augustus Tolton’s cause for canonisation took one step further as his remains were exhumed and verified.

Father Tolton, a former slave, is the first recognised American diocesan priest of African descent. In 2011, the Archdiocese of Chicago officially opened his cause for sainthood.

While digging up Father Tolton’s grave may seem like a macabre undertaking and the antithesis of the prayer “may they rest in peace,” it is actually a reverent and well thought out part of church law regarding the remains of holy people.

“This goes back to a very ancient tradition in the church for a number of reasons. One was to document that the person really existed and wasn’t a figment of someone’s imagination or some group’s imagination. Finding their grave was the telltale sign that the person lived, breathed and walked this earth,” said Chicago Auxiliary Bishop Joseph N. Perry, who is postulator of the priest’s cause and one of the nation’s African-American Catholic bishops.

“It’s basically out of our theology, our tradition that our bodies are made holy in baptism and the reception of the Eucharist and eventually they rise to glory. So while we’re treating everyone with dignity in life, even their remains are to be given a kind of a reverential handling,” said Bishop Perry.

While Father Tolton died in Chicago in 1897, he requested to be buried in Quincy, which is in the Diocese of Springfield. He and his family had fled there after escaping slavery in nearby Missouri and it’s where he returned to minister after being ordained in Rome. He is buried in St. Peter’s Cemetery in a plot with another Quincy priest. Today that cemetery is sandwiched in between KFC and Wendy’s restaurants and located along a commercial shopping thoroughfare.

The day before the exhumation, cemetery crews from the Archdiocese of Chicago and the Diocese of Springfield dug 6 feet down into the clay-based soil to about 4 inches above Father Tolton’s grave. They removed dirt from a 6-foot-by-11-foot space. Using sonar, they had already verified the grave’s location.

A white tent covered the remains and sheltered the small area from the elements. At 7:30 a.m. Dec. 10 crews and diocesan officials gathered for an opening prayer service at the grave site led by Springfield Bishop Thomas J. Paprocki.

The Catholic Church through the Vatican Congregation for Saints’ Causes is very specific about how the process must go.

“There is a canon law that they have to follow that lays out exactly what has to be done and how it’s done to the point that they called the workers together to swear an oath to diligence and professionalism,” said Roman Szabelski, executive director of Catholic Cemeteries of the Archdiocese of Chicago.

Canon law also requires that dioceses employ a forensic anthropologist, a medical examiner and archaeologist in the process. Those three men worked on removing the remainder of the soil and uncovered Father Tolton’s body. It didn’t take long to find the skeletal remains. 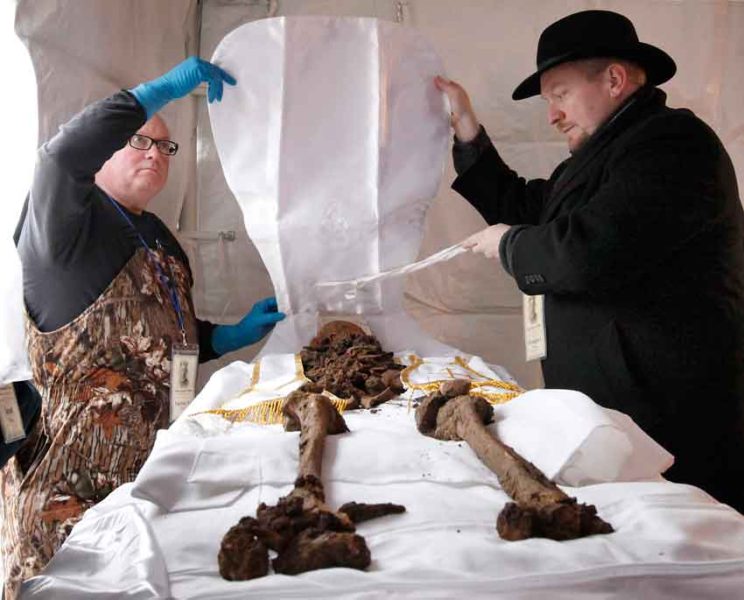 Over time the earth crushed the wooden coffin in which the priest was buried. They discovered the casket had a glass top because they found a significant amount of broken glass mixed in with the remains. At the time Father Tolton died, glass-topped coffins were used for people of position or who were well known.

In addition to the skeletal remains, the crews found other items such as metal handles and wood from the coffin, the corpus from a crucifix buried with him, the corpus from his rosary and a portion of his Roman collar.

“The intent of all of this is preserving the remains we have of a possible saint. We want to make sure that anything that we find is preserved so it will go into a sealed casket and from the sealed casket into a sealed vault,” said Szabelski told the Catholic New World, Chicago’s archdiocesan newspaper.

Father Tolton’s exhumation was slow going with a lot of hand digging with trowels and using soft brushes to unearth the remains to make sure as much as possible was preserved.

This wasn’t the first time archaeologist Deacon David Keene removed skeletal remains from the ground but it was the first time he did it for the church.

“The difference between us and regular grave diggers is we just have an image of what we’re looking for, of what it looks like under the ground,” said Deacon Keene, who serves at Chicago’s Holy Family Parish.

“If this was an unknown skeleton and we were just recovering it, it would take us longer because we would want to expose it all first, map it, photograph it,” he said. “But this is being done for the church and to bring up these remains for reburial so we’re going a little faster than usual.”

As the remains were unearthed, the forensic pathologist laid them out on a table in a mortuary bag under which was a new priest’s alb. He pieced the bones together anatomically.

Bishop Paprocki led everyone in the rosary while that was happening. In addition to the skull, they found Father Tolton’s femurs, rib bones, vertebrae, collarbones, pelvis, portions of the arm bones and other smaller bones.

Once all of the remains and artifacts were collected, the process to reinter Father Tolton began. Priests from Springfield vested the remains with a white Roman chasuble and maniple, amice and cincture. They were then placed in a new casket bearing a plate that identified him as “Servant of God Augustus Tolton,” along with his dates of birth, ordination and death. A document was placed on top of the remains attesting to the work done that day.

Then they wrapped a red ribbon around the casket and sealed it with a wax seal of the Diocese of Springfield. The coffin was in turn placed in a burial vault with another inscription. A second vault held the broken glass and coffin parts and both containers were reinterred in the grave. A closing prayer service wrapped up the solemn process.

Father Tolton received the title of “servant of God” when his cause was officially opened and a postulator was named. If the Vatican determines he led a heroic life of Christian virtues, the church bestows the title “Venerable.”

His grave will only be opened again if Father Tolton is beatified, said Bishop Perry.

So far two miracles are possible and have been sent to Rome, where they are being looked into, he noted.

“We received about 50 some testimonials of people from all over the country testifying to favours from God through Tolton’s intercession. Remarkable things – everything from needed employment to illness in the family to all kinds of problems,” the bishop said. “These people are really just excited about their prayers being answered because of him. He’s been pretty active up there, I think. He probably needs a secretary up there to handle all that has been put on his lap.” By Joyce Duriga Catholic News Service

Why We Must Drop the Labels of Left and Right

At a time of much conflict, in the Church and in the world, there must be a way to arrive...