Cribs: A Brief History of the Nativity Scene

The Nativity scene that forms such an important part of our celebration of the Christmas season was invented by St Francis of Assisi. GUNTHER SIMMERMACHER takes a look at the history of the creche.

Christmas decorations are incomplete without a Nativity scene, depicting Mary and Joseph in the stable with the baby Jesus in a manger surrounded by assorted animals, and with the optional extras of the Magi, shepherds, singing angels and other culturally appropriate innovations.

Even Pope Benedict XVI’s assertions, made in his book Jesus of Nazareth: The Infancy Narratives, that there were no animals at the Nativity and that the angels did not sing, will not change the portrayal of the Saviour’s natal setting, as the pope acknowledged.

We have St Francis of Assisi to thank for the Nativity scenes we love so much today.

Francis di Bernardone lived for several years in the Rieti Valley in Italy’s Lazio region, where he wrote the definitive Rule for his young order, as well as his “Canticle of All Creatures”. In and around a village called Greccio he built several houses and churches. 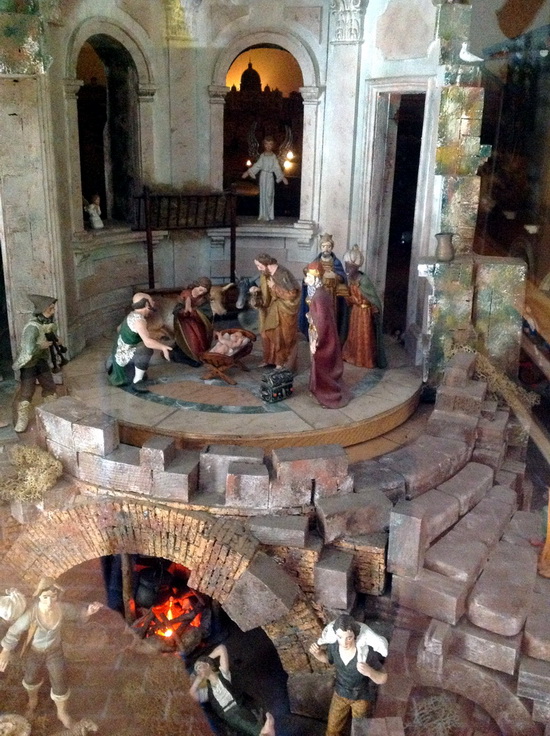 Nativity scenes are displayed at Greccio, the town where St Francis launched a great Christmas tradition (Photo from fowlertours.co.za)

In 1223 he turned his mind to the celebration of Christmas, picking up on an idea he had while visiting North Africa four years earlier.

Even in the early 13th century, the accent at Christmas was on partying and exchanging of gifts. Francis’ vision was to put Christ back into Christmas, in the words of the modern motto.

He was also concerned about whether the faithful understood the Nativity narrative, calculating that it must have been very difficult for people of little education to form a picture of the birth of the Saviour when their only access to catechesis was the Mass, celebrated in a language, Latin, which they neither spoke nor understood.

In the Middle Ages much catechesis was done through graphic illustrations. Stained glass church windows, paintings, sculptures, carvings on church doors and so on often told a story which illiterate people could understand; they were the popular “books” of the time. Bringing alive the extraordinary scene of Jesus’ birth, Francis predicted, would inspire devotion among those who viewed it.

An innovative thinker, Francis took it a step further. He decided to tell the Nativity story, familiar to him through paintings (of the kind we might regard as primitive, since they preceded even the trailblazing artist Giotto), by setting up a tableau vivant, a living picture, of the Nativity.

He obtained the approval of Pope Honorius III, who was enthusiastic and granted indulgences to all who would be involved in creating the scene. Next Francis, who was suffering ill health, roped in his close friend, the knight John Velita, to organise all that was needed, including straw, animals and even an infant. 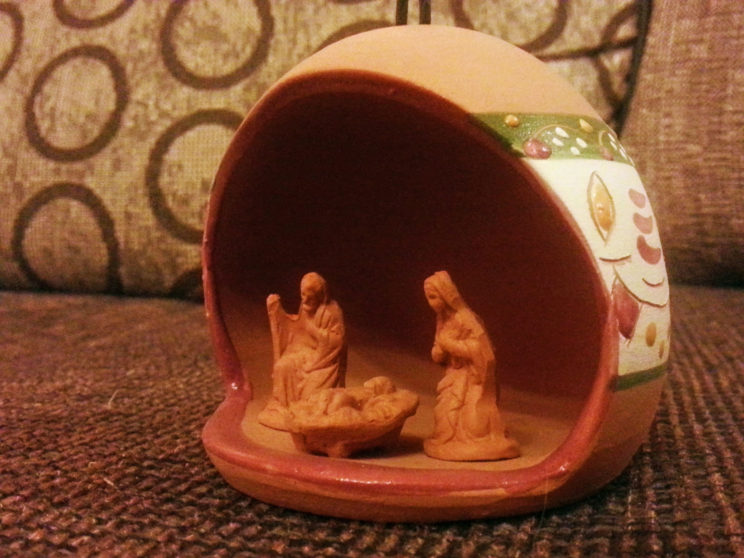 A Nativity scene as presented in a souvenir sold at Greccio today.

So Velita and Francis created the first creche, with actual human beings and animals in a cave in the woods near Greccio. (The Southern Cross pilgrims will visit the site during their journeys in May and September.)On Christmas Eve, burning torches illuminated the woods through which echoed the voices of a chorus of friars and townfolk singing pious hymns. An altar had been erected above the manger on which Midnight Mass was celebrated, with Francis serving as deacon and preaching a stirring sermon.

St Bonaventure (1221-74), the Franciscan minister-general and cardinal, reported that St Francis “stood before the manger, full of devotion and piety, bathed in tears and radiant with joy”.

After the Mass, Bonaventure wrote, Francis lifted the most beautiful baby from the manger. The straw on which the infant had slept later “miraculously cured all diseases of cattle, and many other pestilences”.

Incidentally, around the same time St Francis also wrote what is considered the very first Christmas carol, Psalmus in Nativitate, a hymn that could be sung outside the liturgy – for example at Nativity scenes. The idea caught on quickly and spread throughout Europe. 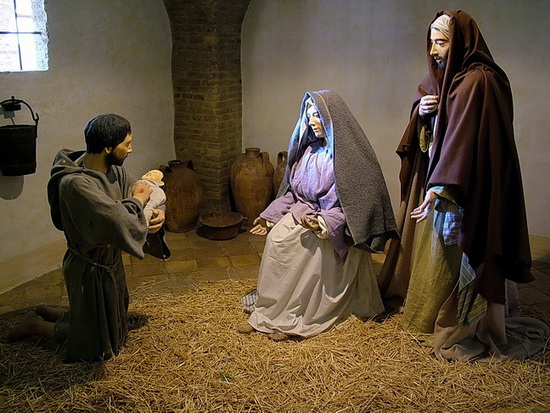 The Greccio celebration caused something of a sensation. Within a century, every church in Italy had a creche, albeit with figurines and statues gradually replacing human beings and livestock. Human nature being as it is, churches and wealthy sponsors of cribs began competing with one another to create the most attractive and elaborate Nativity scene. By the 16th century, whole villages began to make their living from the crib industry.The rest of Catholic Europe noted the emerging tradition and imported it, most enthusiastically in Germany. Of course, local traditions gave the Nativity scenes parochial flavour, though not at the cost of piety. Southern German cribs would be carved in wood; in south-eastern France they were created in the santon method with small painted terracotta figurines.

The santon cribs were a response to necessity. The conventional large-scale Nativity scenes were banned after the French Revolution; the delicate figurines circumvented the prohibition while maintaining the tradition of the crib.

By the 19th century, not only churches and public places, but virtually every Catholic family in Europe displayed a creche, as did many Protestant homes (when the Puritans banned Christmas in the 17th century, they also prohibited the manger-shaped mince pies that were placed into creches).

The 19th century was a time when many of our present Christmas traditions were formed. The Christmas tree, for example, spread from Germany to the Anglophone world, thanks largely to Queen Victoria’s German husband Albert. Likewise, the crib became an essential part of the compendium of western Christmas traditions, especially after German immigrants introduced it in the United States. 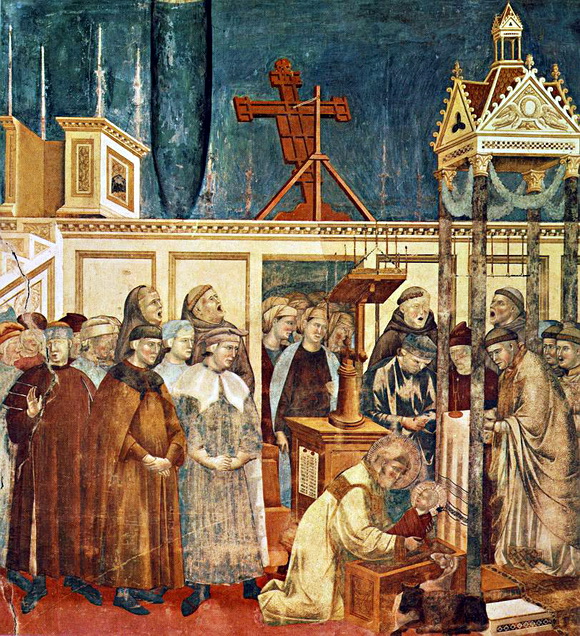 Today Nativity scenes are displayed in shopping malls alongside Santa Claus and his reindeer, sometimes purely for purposes of seasonal decoration or in response to the urging of local Christians.

The Vatican has displayed its Nativity scene since 1982. In fact, it has two: a larger-than-life exhibit in St Peter’s Square and a smaller one in the Paul VI audience hall.Much thought goes into the Vatican creche. In 2007, for example, the central crib scene was flanked by a carpentry workshop-a reference to St Joseph’s profession – and by an inn, next to which a road referred to the flight into Egypt on which the Holy Family would soon embark.

The previous year’s Nativity depicted the Holy Family under a tent nestled in rock. It also included such non-scriptural characters as a flautist and a bagpipe player. The mayor of Titaoca, the northern Italian town where the crib was made, said: “In our town, the family that does not have two Nativity scenes has three”

Some cribs have caused scandal. In 2004, Madame Tussaud’s in London attracted much public protest, including a caustic note from the Vatican, when their Nativity scene featured footballer David Beckham as Joseph and his wife Victoria as Mary, with Tony Blair, George W Bush and the duke of Edinburgh as the Magi, actors Hugh Grant and Samuel L Jackson as well as Irish comedian Graham Norton as shepherds, and singer Kylie Minogue as the angel.

This is certainly not what St Francis had in mind when he set up that first Nativity scene 791 years ago.