Reform is More than just a Face-Lift, Pope tells Curia 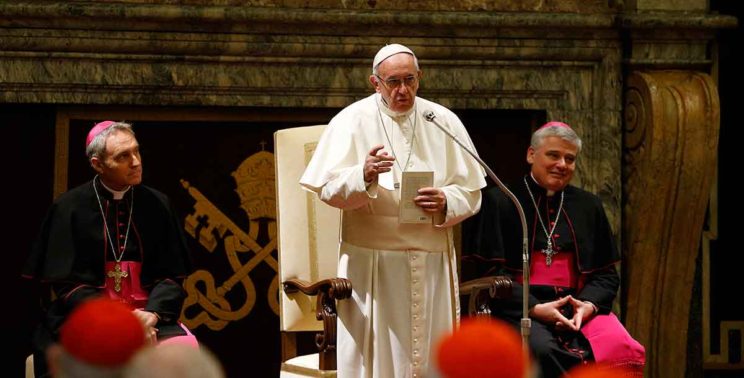 Pope Francis speaks during an audience to exchange Christmas greetings with members of the Roman Curia in Clementine Hall of the Apostolic Palace at the Vatican. (CNS photo/Paul Haring)

The reform of the Roman Curia is not a mere face-lift to rejuvenate an aging body but a process of deep, personal conversion, Pope Francis said.

Meeting with cardinals and the heads of Vatican offices for his annual Christmas greeting, the pope warned that “it is not wrinkles the church should fear” but rather the stains that impede its growth and relevance in the world.

“The reform does not have an aesthetical end to make the Curia more beautiful; it cannot be understood as a sort of face-lift or applying makeup to beautify the elderly curial body, nor plastic surgery to remove wrinkles,” the pope said .

While his addresses in previous years focused on curial ills and medicinal virtues, this year’s speech laid out a 12-step program of guiding principles geared toward an appropriate and long-lasting recovery.

“It was necessary to speak of illnesses and cures so that every operation – to achieve success – be preceded by an in-depth diagnosis, by accurate analyses and must be accompanied and followed through with precise prescriptions,” the pope said.

Although certain forms of resistance to reform may come from a sense of goodwill or fear, there are others that are based on malevolent intentions dressed like a wolf in sheep’s clothing, he said.

“This last type of resistance hides behind justifying words and, in many cases, accusatory; finding refuge in traditions, in appearances, in formality, in what is known, or in wanting to bring everything on a personal level without distinguishing between the act, the actor and the action,” the pope said.

However, no matter whether the intentions are good or bad, resistance is necessary and they “deserve to be heard, received and encouraged because it is a sign that that the body is alive.”

“The absence of reaction is a sign of death!” he exclaimed.

Curial reform, however, must be viewed as a slow and delicate process that must be followed through with continuous discernment, wisdom and action but above all, “with many prayers.”

Listing 12 criteria, the pope explained that the reform is at its heart a sign of the church’s liveliness and a “process of growth and above all, conversion.”

The guiding principles of the reform of the Roman Curia are:

– Individuality (Personal conversion): A person’s spiritual well-being can either strengthen the body of the Curia or damage it and make it sick.

– Pastoral conversion: The workplace must have a pastoral spirit where “no one feels neglected and mistreated” and everyone can experience the care of the Good Shepherd.

– Missionary spirit (Christ-centric): Without an authentic evangelical spirit and faithfulness of the church to its own vocation, “any new structure will corrupt in short time.”

– Rationality: No Vatican office is greater than another and the responsibilities of each office must be clearly distinguished.

– Functionality: The merging of offices, demotions and promotions must always be done to streamline and hone in a dicastery’s specific mission.

– Up-to-date (“Aggiornamento”): Vatican offices must read “the signs of times” and adapt to the needs of the universal church.

– Sobriety: The Roman Curia must be willing to simplify and slim down, especially when it comes to “offices that are no longer responsive to contingent needs.”

— Subsidiarity: Reorganize priorities within the offices and, if necessary, shifting responsibilities to another dicastery while working in sync with the Secretariat of State.

– Synodality: Reducing or merging Vatican offices avoids fragmentation and allows for more frequent meetings between the pope and the heads of those offices.

– Catholicity: The Curia should mirror the universality and multicultural nature of the church and hire personnel from around the world while emphasizing the important role of permanent deacons and the laity — especially women — in the life and mission of the church.

– Professionalism: Every office must adopt a policy of personal formation to avoid the “rust” and routine of functionalism, as well as putting a definitive end to the practice of “promoveatur ut amoveatur” (“removal by promotion”). “This is a cancer!” the pope exclaimed.

– Graduality (Discernment): Taking time by verifying, correcting and discerning methods and policies that can “allow the necessary flexibility to achieve a true reform.”

He also highlighted the various steps, structural changes and continuing processes of the reform throughout his pontificate, all of which are meant to stress that “the heart and center of the reform is Christ.”

Reciting a Christmas prayer written by the late Coptic Orthodox monk, Father Matta El Meskeen, the pope said the birth of Christ is a “celebration of the loving humility of God,” which stands in stark contrast to the logic of ambitions, power, phariseeism, and domination.

Before greeting those present individually, Pope Francis said he had a gift for each one of them: a copy of  Jesuit Father Claudio Acquaviva’s 14th-century book, “Curing the Illnesses of the Soul,” a guide for spiritual directors that emphasized expressing views gently without compromising in substance. By Junno Arocho Esteves Catholic News Service

Pope tells Archbishops not to be ‘Armchair Catholics,’ but Apostles

People from around the world, especially the poor and the homeless, had a chance to send their good wishes for...