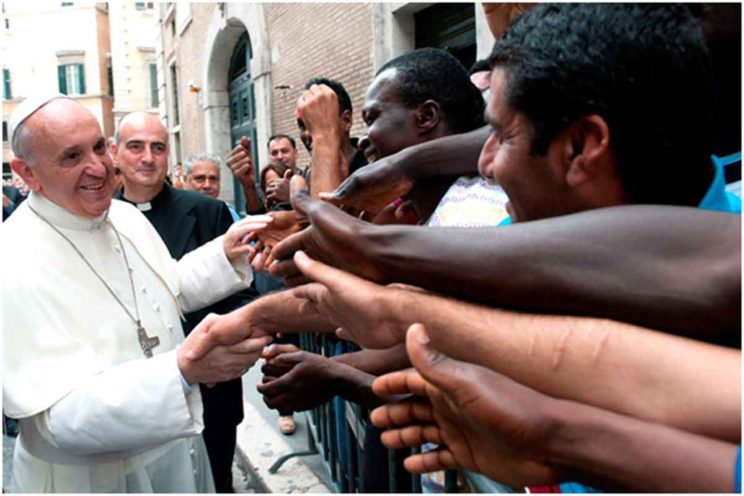 What are You Doing about the Crises?

Pope’s Prayer intention: That all those who are afflicted, especially the poor, refugees, and marginalised, may find welcome and comfort in our communities.

This intention expresses a wonderful sentiment, but how hard it is to put it into practice. It is far easier to pray for it than to do it.

When Syrian refugees were pouring into Germany recently, some courageous individuals braved negative public opinion by holding up signs proclaiming “Refugees welcome”. Some families took refugees into their homes.

Germany’s Chancellor Angela Merkel tried to persuade her compatriots to be open-armed. We admire and salute such people, but most of us would be very nervous about throwing open the doors of our homes to refugees or the homeless people we find on our own streets.

To take in the stranger is to run a risk. One might discover, for example, that the refugee is psychologically as well as materially afflicted. Many refugees come out of traumatic situations and this can seriously affect behaviour. Victims can often be more demanding than grateful.

Then there is the question of how long one’s welcome extends. Will a refugee family stay for a month, or a year, or might they want to move in forever? Asking people to leave, after having previously welcomed them with open arms, is a recipe for embitterment.

We can, of course, welcome people by pressuring our governments to make provision for them and to protest against xenophobia. But no government can simply throw open its borders and few societies have the resources to sustain such an open door policy. Large and sudden influxes of people from another country can be politically and economically destabilising, and providing stability is one of a government’s first priorities.

Here in South Africa, the uncontrolled influx of white settlers caused the indigenous inhabitants to lose political and economic control of their ancestral territories.

Some of the populist political movements in the West at the moment are riding the wave of such fears. Whether founded or not, these fears have to be handled seriously as well as firmly, with understanding coupled with realism. Policies for receiving refugees have to be prudent as well as compassionate. If the far right gets into power in Europe, the prospect for refugees will become even bleaker than it is at the moment.

Most of us will pray and contribute money to charitable organisations as our way of supporting the poor, the marginalised and refugees. Well, the intention is indeed asking us to pray.

However, the implication is that our prayer will work on ourselves and make us more open to those for whom we pray. Hence, if I feel I am not able to welcome outcasts into my home or community, the question is then what else I might be able to do to contribute to the alleviation of their plight?

One response to mass suffering is to shut down in the face of the enormity of the crisis, to say that I am simply unable even to make a dent in such a vast problem. But we are not always like that.

The largest natural disaster in living memory was the tsunami of 2005. We remember how, despite the fact that a quarter of a million people had died and millions more were left homeless, this did not deter many communities, some very poor, from holding collections for the survivors. What they had to offer wasn’t much but offering it anyway showed the natural, human response of spontaneous compassion.

And there was enormous symbolic power in poor communities reaching out and not standing back and expecting the rich nations to do everything.

The first step on the journey towards assisting the poor of Yahweh is to overcome the sense that we are of no account.

“What are these among so many?” say the disciples, but Jesus takes their paltry offering anyway and feeds everyone.

For brief but powerful videos illustrating the pope’s intentions go to www.thepopevideo.org.

More in Chatteris, Pray with The Pope, War and Refugees

As Donald Trump is about to be sworn in as US president, FR CHRIS CHATTERIS SJ looks at the “post-truth” society in which the...