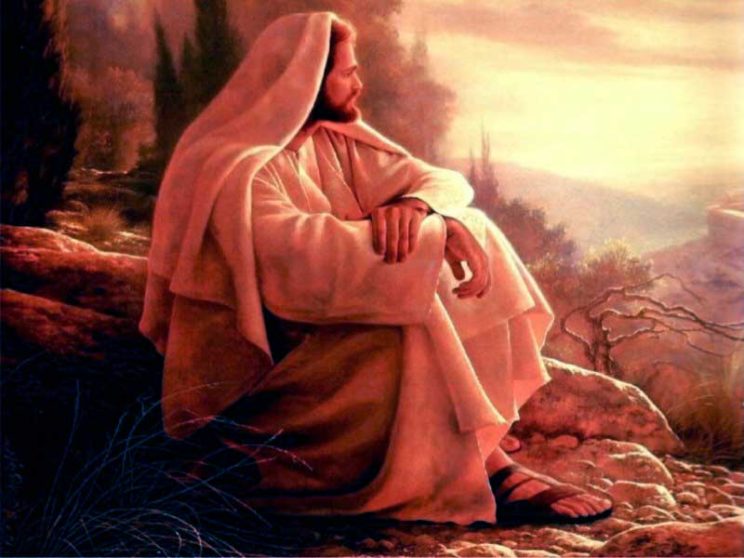 In the three synoptic gospels, Matthew, Mark and Luke, immediately after his baptism in the Jordan when he was anointed by the Spirit, Jesus is led into the desert to be tempted.

Extraordinary as this seems, it resonates well with our experience as humans and reinforces our faith in the solidarity of Jesus with us. As the Letter to the Hebrews expresses it: “Thus he had to be made like his brethren in every respect, so that he might become a merciful and faithful high priest in the service of God to make expiation for the sins of the people. Because he himself has suffered and been tempted, he is able to help those who are tempted (2:17-18).

“We have not a high priest who is unable to sympathise with our weaknesses, but one who in every respect has been tempted as we are, yet is without sin” (4:15).

Just as Jesus entered into solidarity with us sinners at his baptism, so once more he shares in a condition that is common to every human person – temptation. And we will see him wrestling again with acceptance of his mission during the agony in the garden of Gethsemane. What a relief to be able to exclaim as we struggle. “Lord, you know me and you know what it is to struggle. Give me strength!”

The gospel account for this year is Matthew’s version of the temptations. We are told: “He fasted 40 days and 40 nights, and afterwards he was hungry” (4:2). That number 40 is rich with biblical symbolism. The Hebrews wandered for 40 years through the desert; Moses was on Mount Sinai for 40 days before receiving the Decalogue. In the great flood the rain lasted for 40 days.

Satan appears and says: “If you are the son of God, command these stones to become bread.” On Good Friday we will hear those same mocking words from the bystanders at the foot of the cross: “If you are the Son of God, come down from the cross” (27:40). Mockery and temptation are blending into one here: Jesus is being challenged to establish his credibility by offering evidence of his claims.

This demand for a sign we know to be a recurring refrain in the gospels. Those of little faith want to be hit between the eyes with hard evidence. Would they believe it if they were given it? How many times do we make the demand, explicitly or implicitly?

Satan is appealing to the physical demands of Jesus’ body, to satisfy the gnawing pangs of hunger. But he persevered in his fast despite the power he undoubtedly had to satisfy his hunger. Bread in need is still a crying necessity in our society. Not every one goes to bed with a comfortable feeling of having had enough to eat. Am I aware of this scandal in our midst? What do I do about it?

Pope Benedict in his book Jesus observes that the second temptation is the most difficult to understand in terms of the lesson it holds for us. Satan says: “If you are the Son of God, throw yourself down from the parapet of the temple”, and quotes Psalm 91: “He will give his angels charge of you to guard you lest you dash your foot against a stone.” Being in the temple, the Jews believed, was the safest place to be, the place where God dwelt.

The conversation surrounding the second temptation takes the form of a dispute between two Bible scholars. It is a sad irony that over the last hundred years, there have been Biblical scholars who have used their knowledge and intelligence to destroy the figure of Jesus and to dismantle Christian faith.

We have to be on guard, and wise as serpents, to assess critically so many of the books published today and especially to ensure the faith of the young.

The trust that we build up in Our Lord over years of prayer, Bible reading and the Eucharist will be our fortress.

But young people who are so vulnerable to erroneous views and lack the knowledge to assess and critique this anti-Christian propaganda need our help.

We now come to the third and last temptation which is the climax of the whole incident. Satan takes our Lord in a vision to a high mountain where he shows him all the kingdoms of the earth and their splendour and offers him kingship over them all. Isn’t that precisely the mission of the Messiah? Isn’t he supposed to be the king of the world who unifies the whole of mankind in one great kingdom of peace and well-being?

Of course he is, but by not an easy or cheap exercise of power like Satan proposes. Our Lord Jesus came to inaugurate a new community, a new people of God that is based on the ideals preached by himself: loving service and commitment even to giving up one’s life for another.

The concept of Messiah has to be understood in terms of the entirety of the message of the prophets – not worldly power and glory, but the Suffering Servant of Second Isaiah.

The cross and Calvary are essential means to this true divine dispensation that Jesus comes to teach us. And we remember his words to Pilate: “My kingdom is not of this world” (John 18:36).