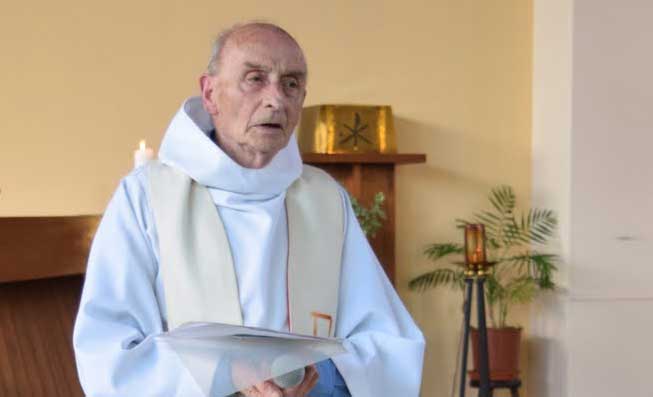 Father Jacques Hamel is seen during a 2016 church service in this handout photo from his parish in Saint-Etienne-du-Rouvray, France. The Archdiocese of Rouen has opened a formal inquiry into the cause for beatification of Father Hamel, who was killed while celebrating Mass in July 2016. (CNS photo/Paroisse Saint-Etienne via EPA)

The French archdiocese of Rouen has opened a formal inquiry into the cause for beatification of Fr Jacques Hamel, who was killed while celebrating Mass in July 2016.

Fr Hamel was killed as he celebrated Mass at Saint-Etienne-du-Rouvray church near Rouen when two young men who claimed allegiance to ISIS stormed the church. After taking several hostages, the attackers slit Fr Hamel’s throat and seriously injured another parishioner. Following a standoff, police killed the attackers, ending the hostage situation.

Traditionally, the Vatican requires a five-year waiting period after the death of a candidate for sainthood before a cause is opened. Pope Francis waived the rule in response to pleas from French Catholics.

The inquiry is the first step towards beatification and possible sainthood.

The pope called Fr Hamel a martyr during a special requiem for the priest in the chapel of Domus Sanctae Marthae at the Vatican.

“Fr Jacques Hamel had his throat slit on the cross, at the exact moment he was celebrating the sacrifice of Christ’s cross. A good man, meek, brotherly, and who always sought to make peace, was murdered as if he were a criminal. This is the satanic line of persecution,” the pope said.

The inquiry is expected to take several years even though the beatification of a martyr is a simpler process because there is no need to prove a miracle occurred through his intercession.—CNS