Church to Observe First World Day of the Poor 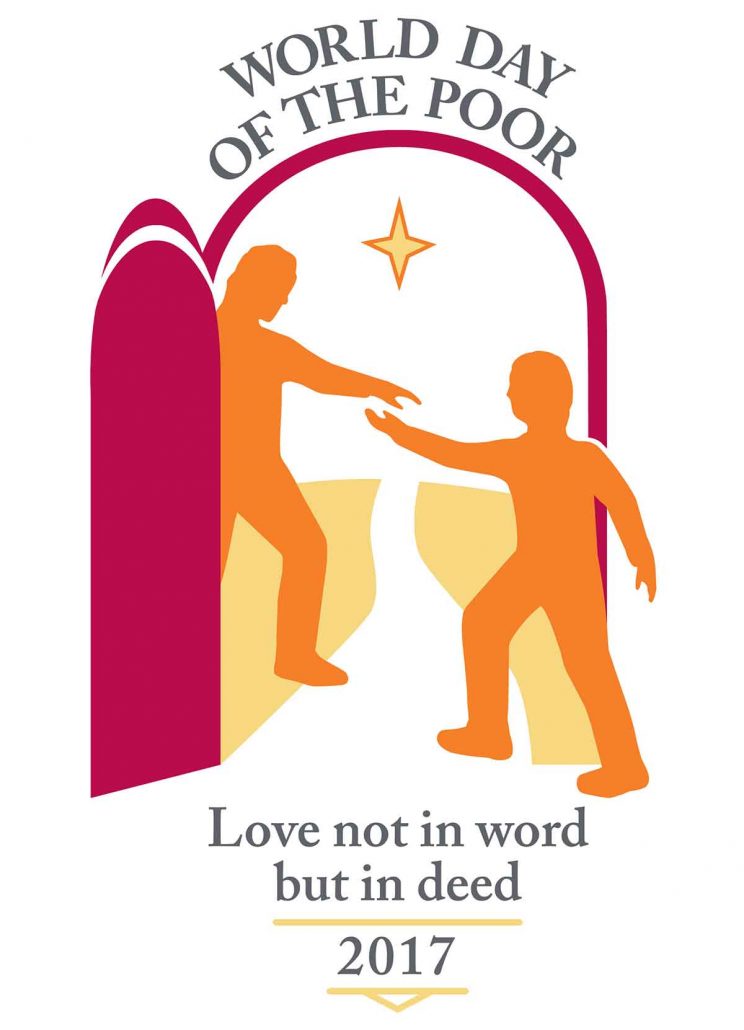 This is the logo for the World Day of the Poor, to be celebrated Nov. 19 this year. It will focus on the Apostle John’s call to love “not with words, but with deeds.” (CNS photo/Robert Duncan)

People cannot sit back and be indifferent or unresponsive to growing poverty in the world as a privileged minority accumulates “ostentatious wealth,” Pope Francis said.

“God created the heavens and the earth for all; yet sadly some have erected barriers, walls and fences, betraying the original gift meant for all humanity, with none excluded,” the pope said in a message for the first World Day of the Poor.

The newly established commemoration and the period of reflection and action preceding it are meant to help Christians develop and maintain a more consistent and sincere lifestyle built on sharing, simplicity and the essential truths of the Gospel, the pope said in the message released June 13, the feast of St. Anthony of Padua.

The World Day of the Poor – to be marked each year on the 33rd Sunday of Ordinary time – will be celebrated Nov. 19 this year and will focus on the Apostle John’s call to love “not with words, but with deeds.”

There are so many forms of material and spiritual poverty that poison people’s hearts and harm their dignity, the pope said in his message, and “we must respond with a new vision of life and society.”

Too often Christians have taken on “a worldly way of thinking” and forgotten to keep their gaze and goals focused on Christ, who is present in those who are broken and vulnerable.

An admonition by St. John Chrysostom “remains ever timely,” the pope said, quoting: “If you want to honour the body of Christ, do not scorn it when it is naked; do not honour the eucharistic Christ with silk vestments and then, leaving the church, neglect the other Christ suffering from cold and nakedness.”

“Poverty has the face of women, men and children exploited by base interests, crushed by the machinations of power and money,” he said. “What a bitter and endless list we would have to compile were we to add the poverty born of social injustice, moral degeneration, the greed of a chosen few and generalised indifference.”

“Tragically, in our own time, even as ostentatious wealth accumulates in the hands of the privileged few, often in connection with illegal activities and the appalling exploitation of human dignity, there is a scandalous growth of poverty in broad sectors of society throughout our world,” Pope Francis wrote. “Faced with this scenario, we cannot remain passive, much less resigned.”

Christians must reach out to the poor as Christ did and commanded, the pope said. The poor, in fact, “are not a problem, they are a resource” rich in dignity and God-given gifts that can help Christians better understand the essential truth of the Gospel.

Pope Francis said a good role model was his namesake, St. Francis of Assisi, who kept his gaze fixed on Christ so as to be “able to see and serve him in the poor.” The pope took the name of this saint during the conclave that elected him in 2013 after another cardinal told him, “Don’t forget the poor.”

“If we want to help change history and promote real development, we need to hear the cry of the poor and commit ourselves to ending their marginalisation,” the pope wrote in his message.

Just a few days before the end of the extraordinary Jubilee Year of Mercy, Pope Francis spoke of his desire to have a special day dedicated to the poor.

As the doors of mercy were set to be closed around the world, “let us ask for the grace not to close our eyes to God, who sees us and to our neighbor who asks something of us,” the pope said in that homily in November 2016. However, straying from his prepared text that day, the pope told those gathered, “I would like today to be the ‘day of the poor'” to underline everyone’s responsibility “to care for the true riches, which are the poor.”

Archbishop Rino Fisichella, president of Pontifical Council for Promoting New Evangelization, told reporters the pope envisioned the day as a way for the whole church to reflect on the Gospel sense of poverty – seeking and receiving only the essential – and then to act and concretely share the essential treasure of God’s love and mercy.

Local churches should dedicate the week preceding the World Day of the Poor to creative initiatives fostering encounter, friendship, solidarity and concrete assistance, the papal message said. The pontifical council will release a pastoral guide in September to help parishes in their planning, the archbishop said.

The idea is to stir people’s consciences and to understand more deeply what the Gospel teaches, he said.

It’s not about handing out change in order to feel better about oneself, the archbishop said; it’s about becoming truly concerned and invested in the other and seeing him or her as a brother or sister in God.

The pope will celebrate Mass in St. Peter’s Basilica Nov. 19 with the poor and volunteers and will offer lunch afterward for “at least 500 poor” in the Vatican’s Paul VI audience hall, Archbishop Fisichella said, adding that many local churches and Catholic organizations in Rome would be offering similar gestures of a shared meal.