How Elvis Came to Sing the Hail Mary

On August 16 it will be 40 years since the death of Elvis Presley, GÜNTHER SIMMERMACHER looks at the background to a song Presley sang about the Holy Rosary.

As the world takes to look back at the life of Elvis Presley on the 40th anniversary of his death at 42 on August 16, 1977, Catholics may note with interest that the erstwhile King of Rock & Roll once sang a song about the Rosary. 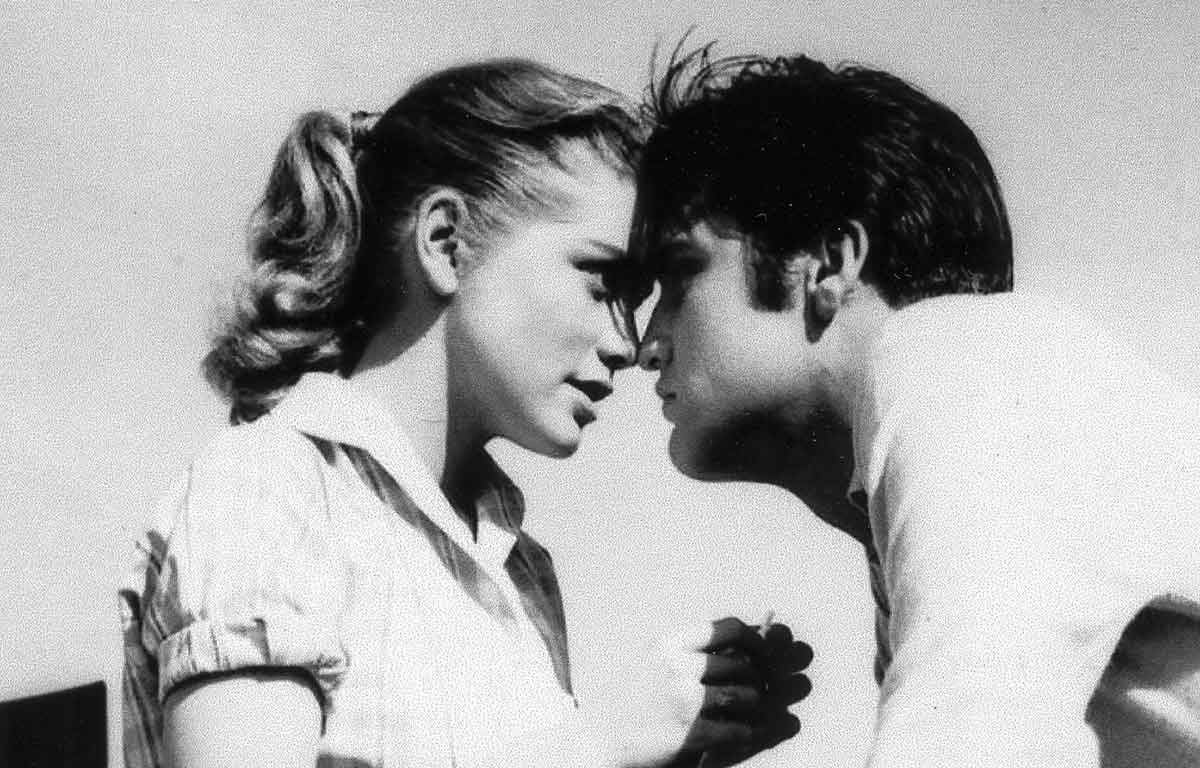 Elvis Presley with Dolores Hart, now a Benedictine nun, in the 1957 movie Loving You. In 1971 Presley recorded a sing about the Rosary. This must have pleased Sr Dolores who wrote about kissing Elvis, who died 40 years ago on August 16, in her 2013 autobiography, The Ear of the Heart: An Actress’ Journey From Hollywood to Holy Vows. (Photo courtesy of Ignatius Press)

Elvis was not a Catholic — he came from the Pentecostal background — but he was a devout Christian. Indeed, he was greatly influenced by gospel music, no less so than he took inspiration from rhythm & blues and country music. All of these often overlapped at the time anyway. One of Elvis’ childhood heroes, country star Red Foley (whose song “Old Shep” was young Elvis’ favourite), in 1950 recorded a song dedicated to Our Lady of Fatima.

Presley drew his influences widely, but when he was a young up-and-coming singer, Elvis shared with his beloved mother an obsession for the white gospel duo the Louvin Brothers. The Louvin fellows were like the angel and devil on your shoulders. Charlie was a kind and decent man, but his hard-drinking brother Ira, who died young, was quite the opposite. Still, Elvis was excited to meet his heroes when he was billed to support them, among other acts, in Nashville. He excitedly introduced himself to Ira — who sent him packing with the advice that he won’t talk to “white n*****s”. Elvis never covered any Louvin Brothers songs, though he did record a Charlie Louvin solo number.

Throughout his career, Presley put on record many gospel songs, of different backgrounds: traditionals, black gospel, country gospel, and church hymns such as How Great Thou Art”. With one of them, “Crying In The Chapel” (previously a hit for The Orioles), he had an international bestseller.

The most unusual of the lot must be “Miracle Of The Rosary”, which Elvis recorded for his 1972 album Elvis Now!, which also featured covers of hits such as The Beatles’ “Hey Jude”, Kris Kristofferson’s “Help Me Make It Through The Night” and Gordon Lightfoot’s “Early Morning Rain”. The Rosary song is the LP’s second title, after the Kristofferson and before The Beatles songs. The lyrics couldn’t be any more devout:

Oh Blessed Mother we pray to Thee
Thanks for the miracle of Your Rosary
Only You can hold back
Your Holy Son’s hand
Long enough for the whole world to understand
Hail Mary full of grace
The Lord is with Thee
Blessed are thou among women
And blessed is the fruit of Thy womb, Jesus
Oh Holy Mary dear Mother of God
Please pray for us sinners
Now and at the hour of our death
And give thanks once again
For the miracle of Your Rosary

A powerful Catholic statement by a man who knew little about Catholicism, growing up in a region where the Church of Rome is in a tiny minority, and adhering to as denomination whose relationship with Catholicism is complicated. And yet, here Elvis is, singing about the Rosary — and not on some obscure gospel LP but on a gold-selling pop album.

And it wasn’t the record company that had suggested the song: it was chosen by Presley himself — possibly as a favour for an old friend who had written it many years earlier.

A Miracle of the Rosary

The writer was Lee Denson, one of Elvis’ first friends after the Presley family moved from Tupelo, Mississippi to Memphis in 1948, when Elvis was 13. It was Lee, two years older, who taught Elvis his first guitar chords. Denson went on to have a career as a rockabilly singer, with some success but no hits. In 1957 he and Elvis played together on stage for the first and last time, at a charity concert.

In 1961 Denson had a rare get-together with his old friend, during which he played “Miracle Of The Rosary”, which he had recorded the previous year, to Elvis. They never met again. It took Presley ten years before he recorded the song; what prompted him to do it at that time seems unknown. In the interim, Denson had recorded the song himself. Now, in 1971, Elvis associate Red West (who died in July this year) phoned Denson to announce that “Miracle Of The Rosary” would be on Presley’s LP. Denson received royalties from the song for the rest of his life.

The kicker is: Lee Denson was the son of a minister at the Pentecostal church which the Presley family attended. In fact, while he always remained a believer, he was not a particularly good Christian — until one day in the late 1950s, Denson felt what he later described as “a powerful inner force” surging through his body. He and his wife Mary were unnerved by the experiences and somehow decided to pray the Rosary. The following day they went to Mass, and in short order converted to Catholicism. “Miracle Of The Rosary” is a testament of that conversion.

Denson died on November 6, 2007 at the age of 75. His funeral Mass was celebrated in Memphis’ Catholic church of St Teresa. His remains were interred at the city’s Calvary Cemetery — on Elvis Presley Boulevard. On his gravestone a final message is engraved: “Thanks once again for the Miracle of the Rosary”.

Saying the Rosary at Maximum Speed? No Ways!