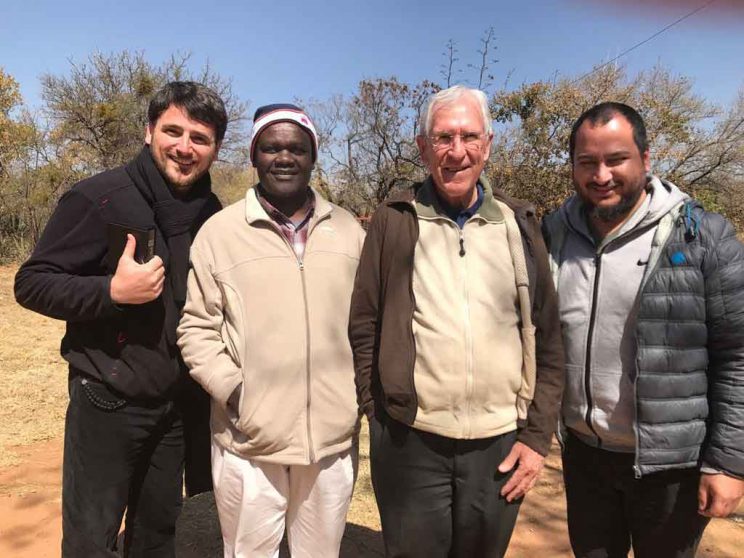 Inspired by the first Apostles, 72 members of Neocatechumenal Way of South Africa went on a ten-day mission, journeying without means in pairs.

Travelling throughout Southern Africa to announce the Good News of the Gospel, they went on foot, two by two, without money, food or a place to sleep — like the Apostles following Jesus’ command in Matthew 10 — for ten days.

The group was blessed for their mission by Archbishop Stephen Brislin during a sending retreat in Cape Town.

“Through our baptism we share, as did the apostles, in the ministry of Jesus Christ of the proclamation of the Kingdom of God,” the archbishop told the missionaries.

“Evangelisation in the modern time is not only to take Christ to those who have not heard of him but also to people for whom Christ is no longer relevant, to rekindle their faith. We proclaim hope. Because no matter what we have done in life, Christ always offers us his forgiveness, his salvation.”

Archbishop William Slattery of Pretoria sent a message to the group: “Go with Jesus. Go to the towns and villages, go to the rich and poor. Share your beautiful faith with all. You remind me of Galilee, you remind me of Assisi. May your faith set many hearts alight.”

This same mission was concurrently held in all parts of the world, as announced last year during the World Youth Days in Krakow, when more than 150 000 youth of the Neocatechumenal Way gathered for a vocational meeting.

In the Spirit of Vatican II

“This mission was not just for consecrated people,” said Dino Furgione, who is responsible for the Neocatechumenal Way in South Africa.

“There were married people, single, young and old, priests and seminarians. This is the spirit of the Second Vatican Council, the body of the Church as a true presence of Christ,” he said.

“We have experienced the fact that Christ accompanies us,” he said, adding that “we can testify that we didn’t lack anything”, giving answer to Jesus’ question in Luke’s Gospel: “When I sent you out without a purse, bag, or sandals, did you lack anything?”

This doesn’t mean that there were no problems. “Some [missionaries] indeed suffered some deprivations, but we all experienced the ‘perfect joy’ of St Francis who also used to send his friars two by two’,” said Mr Furgione.

When the group gathered to share their experiences, “everyone had the light of the risen Christ in their eyes”, he said.

Mr Furgione highlighted the experience of encounter on the mission.

“Along the way we spoke with many people from different backgrounds and cultures who were suffering, looking for answers to the existential questions that life presents to them. They were like sheep without a shepherd,” he said.

“We see in this the need to evangelise, to continue going out announcing Jesus Christ. It is true that today, everywhere is a land of mission.”