Heresy and schism: What’s the Difference?

What is the difference between heresy and schism? If the Eastern Church is in schism with the Catholic Church, are Protestant churches heretical churches? MD Pienaar 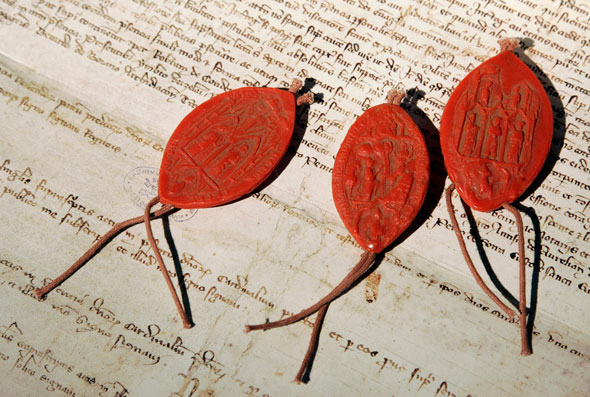 Three seals are seen on a replica document in which Pope Clement V absolved the Knights Templar of charges of heresy. A reproduction of the Latin-language minutes of trials against the Knights Templar in 1308 is being published by the Vatican Secret Archives. (CNS photo/Alessandro Bianchi, Reuters)

Let’s get started with a clear idea of the difference between a schism and a heresy.

Schism: Refusal of Obedience to Authority

A schism is a state of being in disagreement with an accepted Catholic belief or practice, usually a refusal of obedience to the authority of pope and bishops.

Being in such a state does not break one away from the unity of the Church because one remains within the fellowship of the faithful.

St Paul had to contend with such disagreements among his Corinthian converts, for example in I Cor 1:10 and I Cor 11:18.

A heresy is not primarily a state of being in disagreement but a wilful deviation from accepted doctrine. St Peter refers to false prophets who bring the Way of Truth into disrepute by presenting heretical teachings as true (2 Pet 1:1-2).

Schisms are generally caused by personal conflicts. Heresies are generated by the deliberate adherence to a teaching or opinion that directly contradicts true doctrine as understood and preached by the Church. Persons who obstinately adhere to heretical views in spite of being reproved by the Church, might be called heretics.

Having started with definitions that were applied in the past, let us move into the 21st century.

Especially since Vatican II the Church has avoided attaching the terms schism or heretic to any Christian body that disagrees with its beliefs and customs. Vatican II avoided the word heresy altogether.

Today Christians of other traditions cannot be held responsible for conditions deriving from historical events. It would, therefore, be presumptuous to label their communities as being in schism or heresy.

Vatican II’s Constitution on the Church in the Modern World (15) took an optimistic view of Christianity’s divided condition and recognised that the Church is linked in many ways with those who, being baptised, are honoured with the name of Christian. Though not professing the faith in its entirety or preserving unity of communion with Rome, they share with us in prayer and other spiritual benefits.

The Eastern Church is not in full communion with the Catholic Church but its structure and sacramental system are identical with those of the Church, and there are continuing efforts to bring the two totally together in accordance with Christ’s will. Protestants and Catholics are increasingly striving towards cooperation in prayer and good works.

These are the hopeful signs of things to come, so that there will be one flock and one shepherd.