How Martin Luther was the ‘first media star’ 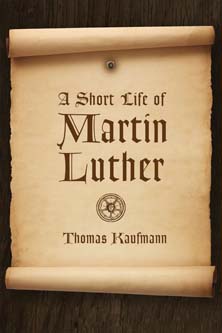 On October 31 it will be the 500th anniversary of Martin Luther nailing the famous “95 Theses” to the door of the church in Wittenberg, Germany. Throughout this much-anticipated year, Lutherans the world over are holding events to celebrate the occasion.

These commemorations began with a high-level ecumenical event at Lund in Sweden last year, attended by Pope Francis who warmly embraced the Lutheran Archbishop of Sweden, who happens to be a woman.

In recent years there has been sustained dialogue between the Catholic and Lutheran Churches and the gap between the two denominations seems to have been considerably narrowed.

The teachings of Luther have been revisited in a more friendly ecumenical atmosphere less fraught with papal excommunications and reference to the pope as the “anti-Christ” which would have made a cool, calm examination of doctrinal differences impossible 500 years ago.

I’m not sure whether author Thomas Kaufmann has had the benefit of information about the recent cordial discussions between Catholics and Lutherans because he makes the startling claim that “according to Roman Catholic teaching, Luther is damned for time and eternity. The condemnation applies not only to Luther himself but also to all those who might feel committed, directly or indirectly, to his interpretation of Christianity” (meaning all Lutherans?).

This is not my reading of the agreements we have reached with the Lutheran Churches and certainly Pope Francis could hardly have been thinking about his Lutheran hosts in Sweden along the lines suggested by Kaufmann.

Nevertheless this book is worth reading because the author has packed a great deal of useful information into this slim volume which brings out clearly the enigma that was Martin Luther, with all the contradictions of his personality making him a man of opposite extremes.

This was a profoundly inward person who nevertheless, by using the printing press, became the “first media star of history”; a contemplative and an activist; a man of piety who could resort to foul language in ordinary domestic conversation; a man who oscillated between the highest degree of self-assurance and the deepest sense of unworthiness and dark self-accusation; someone who described himself as “a stinking bag of worms” and yet claimed to have reformed more than “the pope’s church could do with five councils”.

Kaufmann recounts the great achievements of Luther. By making the Bible available in the vernacular he “transformed Western Christianity”. His attack on indulgences unleashed “a dynamic that would produce the most fundamental changes ever experienced in the Western Church”.

But there was also a dark side which Kaufmann recognises. Luther had many enemies, but Kaufmann claims that Luther imagined many more enemies than he actually had. Those whom he regarded as his enemies he saw also as the enemies of Christ. In the context of being excommunicated as a heretic by the pope, he gave as good as he got by declaring the pope to be the anti-Christ.

His other great enemy was “the Turk” whom he regarded as the “very devil incarnate”. But the Turks were not to be fought militarily through the Crusades, but through repentance and prayer.

Just slightly less of an enemy than pope or Turk were Jews for whom Luther developed an obsessive enmity as “a brood of vipers” and “children of the devil”, climaxing In his late years in a belief that Jews should be expelled from Protestant cities as a “most sacred obligation”. While one may be horrified by these attitudes towards Muslims and Jews, one has to ask whether Catholic attitudes at that time were any better?

One of the most fascinating aspects of Kaufmann’s biography is his description of Luther’s love of community. He had been an Augustinian monk, living in large monasteries, rising even to the position of number two Augustinian in Germany with direct supervisory authority over 11 Augustinian houses.

Later he would live in what had been an Augustinian house, with his wife (a former nun), their children, domestic workers, relatives from both sides, 10-20 students, some tutors, and visitors, perhaps as many as 50 people. Luther never complained about the constant hubbub, though he certainly would have had the power to change things — clearly he didn’t want to.