In times of sorrow and joy, it is always good to keep our eyes on God’s guiding hand. In everything, we do well to always ask: “What is God trying to tell us?”

On October 3, I awoke unusually early, at 5am, to learn that my friend and leading Holy Land guide Rimon Makhlouf had died suddenly of a heart attack at the age of 57, while on a business trip to the Philippines. Just hours before his death, he had texted a friend: “Lord, may your will be done.” 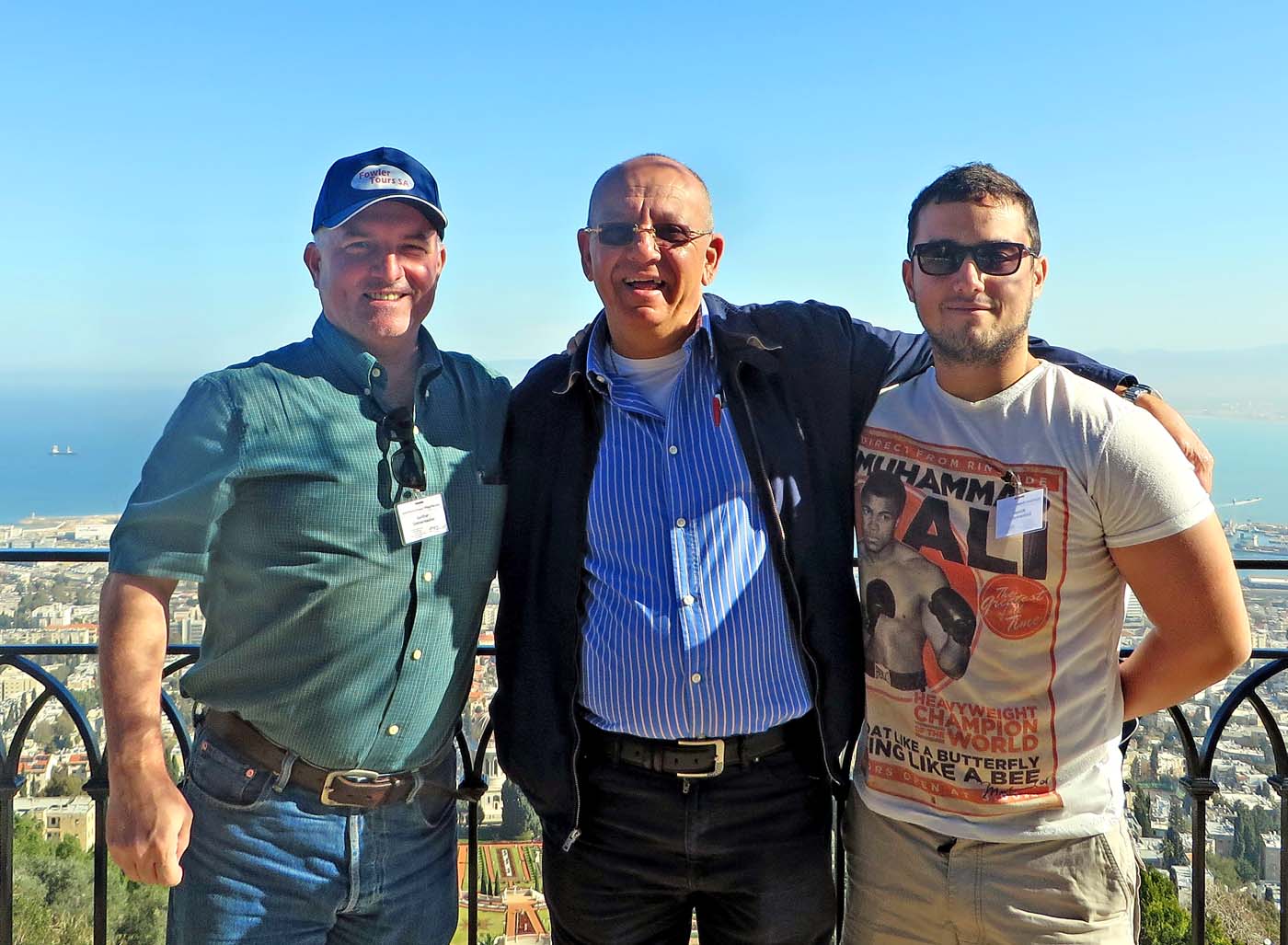 Many South African pilgrims to the Holy Land and listeners of Radio Veritas will know Rimon. He guided many pilgrimages and appeared on Radio Veritas several times. He addressed public lectures, speaking about the “Seven Hills of the Holy Land”. Once he wrote a fine article in The Southern Cross about how Jerusalem is the home of all Christians. Welcoming pilgrims at the start of a pilgrimage, he would greet them: “Welcome home!”

Rimon was a devout Roman Catholic. On one pilgrimage, as we entered the basilica of the Annunciation in Nazareth, he knelt down and prayed: “Hail Mary, full of grace, the Lord is with thee…” — right at the place where tradition places the archangel’s greeting to the Virgin Mary. I had never seen guides do that.

Other Christian guides would come up to greet him; Rimon had trained many of them. They’d call him “Teacher”. As president of the Palestinian Guides’ Union, he was their doyen, and the man who would fight for them. He was instrumental in having Palestinian guides certified by Israel’s tourism ministry.

Lately he had been advocating that ministers and priests should not assume the role of guide but perform their job of spiritual directors. Only officially accredited locals should be allowed to guide, he argued. His concern was that clerics who also guide were denying Christian Palestinians a livelihood. This meant that he had to challenge the locally-based Franciscan friars, some of whom also act as tour guides. It is a mark of the respect that Rimon attracted that this did not affect his relationship with the Custodians of the Holy Land. Rimon was buried at his home parish, St Saviour’s in Jerusalem’s Old City, the Franciscans’ “headquarters”.

Rimon was a go-to guy for high-profile pilgrims. Just recently he had guided on separate pilgrimages led by Cardinal Daniel DiNardo, president of the US bishops’ conference, and Cardinal Roger Mahony, archbishop emeritus of Los Angeles. When the Catholic author Scott Hahn brought a pilgrimage group comprising eight buses, Rimon was Hahn’s chief guide, coordinating the whole operation. When the Knights of the Holy Sepulchre in the US — of whom Rimon was an invested member, as is his wife, Shamiram — came to the Holy Land last year, they produced an excellent video, using Rimon as the narrator (see below).

His pilgrims will remember Rimon for his larger-than-life personality, his kindness and his great humour. And they’ll remember him for his forensic knowledge of Scripture and how it relates to the places one sees in the Holy Land. To him, guiding was a ministry. The huge outpouring of grief on Facebook at Rimon’s death was a testimony to that. People who had been on just one pilgrimage with him were grieving bitterly. They had experienced not only a tour guide but a spiritual teacher and friend.

Rimon will live on in his son Gabriel (known everywhere as Gaby), an excellent guide in his own right and a privileged pupil of his late, great father.

My friend was to visit South Africa for a series of talks in February. He loved our country, and especially Archbishops Stephen Brislin and William Slattery, and Fr Emil Blaser OP, all of whom he guided repeatedly. The Southern Cross pilgrimage in August with Archbishop Slattery was his second-last. By every account, he was in great form.

Visiting Archbishop Brislin in his office in 2015, he saw lots of framed papyrus artworks of the Flight Into Egypt, Cape Town archdiocese’s patron. “Your Grace,” he said, “you must have something from the place where the Holy Family’s journey actually began.” In short order he sent a beautiful olive wood carving of the Flight Into Egypt from Bethlehem. It now stands on the archbishop’s desk. 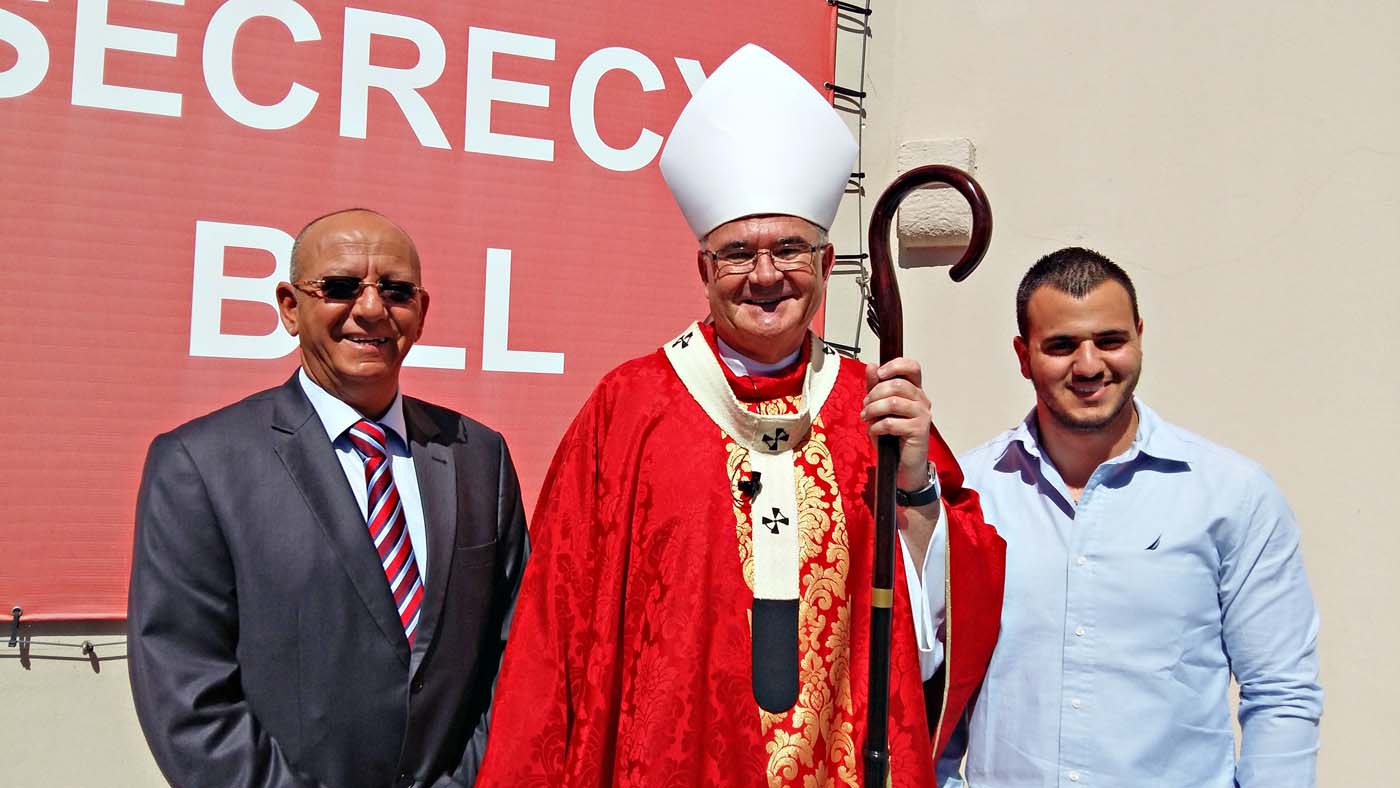 Rimon Makhlouf and his son Gaby, who is also a tour guide, with Archbishop Stephen Brislin outside Cape Town’s St Mary’s cathedral.

Rimon’s generosity was immense — in matters material and, more importantly, of the spirit. I was apprehensive when I had him read my book, The Holy Land Trek. After all, this was a leading authority on the Christian history of the Holy Land; a lecturer in tourism at the University of Bethlehem; a teacher of guides and member of their examination panel. In the event, Rimon was very complimentary about it, saying it was the best book of its kind he had read yet. But my concern was where I might have inserted factual errors. He found one: on some date in the 16th century, I was out by 50 years or so.

To me and family the Makhloufs have become close friends — which in Palestinian culture made us family. And, indeed, the relationship between Rimon and my wife especially was such that one could speak of them as brother and sister. They bickered like siblings and supported one another. Rimon would always phone to find out if everything was going OK.

My wife learned of our dear friend’s death while she was in Portugal, in a Lisbon hotel room on the morning of the day she was leaving for Fatima. Fatima — it’s a place Rimon, with his great devotion to Our Lady, had always wanted to make a pilgrimage to. His dream was to make the penitential walk on his knees around the Apparition Chapel. He never had that opportunity.

In that circumstance, I believe, we can see God’s guiding hand: he wanted my wife to be at that particular place for Rimon — to pray for (and with) him, but perhaps also for her to receive comfort and healing in her own grief, by being there in Fatima. God’s hand is always active in our lives: we must seek to be awake to the how and why.

As Rimon might say at this point: “Lord have mercy, Christ have mercy.”