Franciscans’ 800 Years in the Holy Land

This year the Franciscans mark 800 years since they first came to the Holy Land, where they are the custodians of holy shrines — and part of daily life. GÜNTHER SIMMERMACHER looks at that history.

All Franciscan missionary activity dates back to a meeting of the eight-year-old order in Assisi in 1217, when St Francis decided that the friars should go out to all four corners of the world.

That first general chapter of the Friars Minor established 11 Franciscan regions, including one covering the Holy Land. That same year, Brother Elias of Cortona, one of St Francis’ earliest followers, and a small group of missionaries arrived in Palestine. 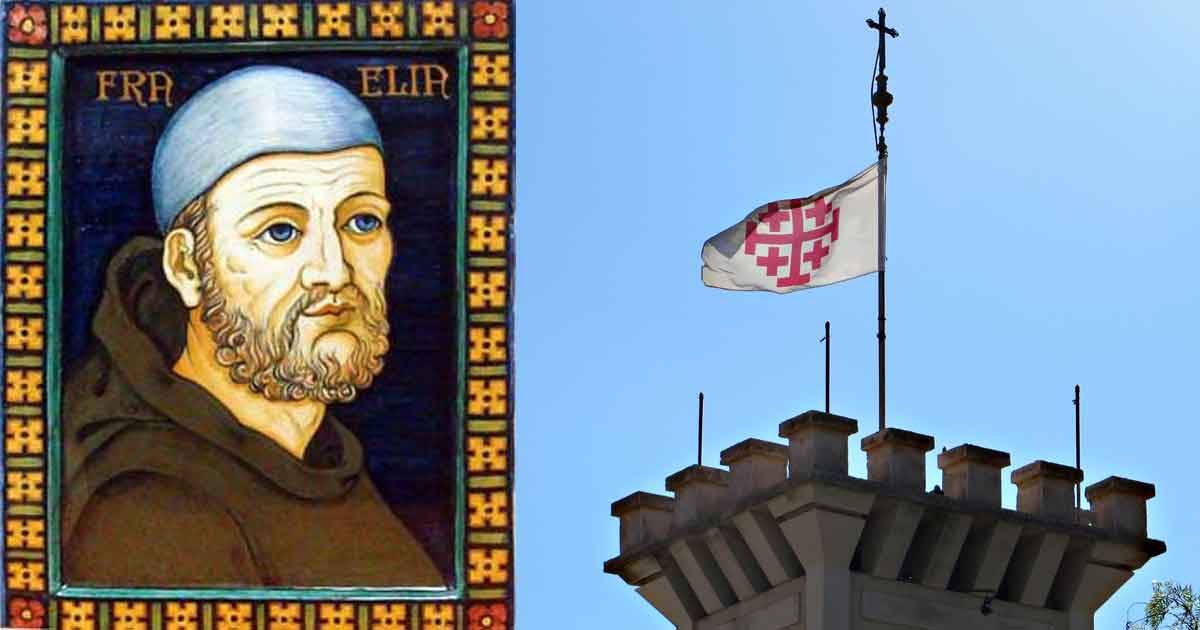 Left: Br Elias, the friar who led the first group of Franciscans to the Holy Land in 1217. Right: The Franciscan flag flies on Mount Tabor, site of the Transfiguration. It features the Jerusalem cross—a Greek cross in red on a white background with four smaller crosses—which is the symbol of the Custody of the Holy Land.

They arrived to a region controlled by Muslims—the same year they arrived, the Fifth Crusade was launched — and likely did not draw too much attention to themselves, as is evidenced by the fact that the first official Franciscan house in Jerusalem was built only in 1229.

Two years later St Francis visited the region, famously trying to mediate a peace with the Sultan Malek al-Kamil, while the Egyptian city of Damietta was brutally besieged by Crusaders. The sultan was a relatively tolerant ruler, and certainly was impressed with Francis, whom he presented with an ivory trumpet and a letter of safe conduct.

St Francis’ respect for the sultan, and his attempts at making peace in place of the belligerence of the Crusades, entrenched a reputation among generations of Muslim rulers that the Franciscans were a tolerable Christian presence in the Holy Land.

We do not know whether St Francis used the sultan’s letter of safe conduct to visit the holy shrines of the Holy Land which he so yearned to see. If he didn’t, then he certainly brought Bethlehem to Europe by way of initiating the tradition of the Nativity Scene at Greccio, Italy, in 1223.

St Francis took Brother Elias home with him — Elias would eventually become his successor, and go on to live a turbulent life, but a group of Franciscans clearly remained, and witnessed the return of control of Jerusalem to the Crusaders in 1227.

Two years later they opened that first Franciscan house in Jerusalem, at what now is Station V of the Via Dolorosa (pilgrims may remember Station V as the building with Jesus’ supposed handprint on the wall).

In 1230, Pope Gregory IX instructed Catholic leaders to welcome the Franciscans throughout the Holy Land, and to cooperate with them in areas controlled by Crusaders and by Muslims.

In 1244 Jerusalem fell again, to the Mamluks. Several friars were among the martyred Christians. More friars were martyred in several persecutions and conquests in the decades that followed.

The Mamluk rulers were not a tolerant bunch. Still, the Franciscan Pope Nicholas IV, the pontiff from 1288-92, persuaded the sultan to allow friars to minister in the church of the Holy Sepulchre. But after the defeat of the Latin Kingdom with the fall of Acre in 1291, the Franciscans were expelled and went into exile in Cyprus.

In the times that followed, the number of Christians in Jerusalem was decimated but pilgrims still came, including Franciscan friars from Cyprus. But the Mamluks made it a point of filling Jerusalem on Christian holy days with Muslim and Jewish pilgrims, and allowed the expansion of mosques and synagogues while most Christian sites were in decay.

By the 1320s the Franciscans were slowly returning to the Holy Land, and were given the custody of the church of the Holy Sepulchre (which very nearly went to the Dominicans). 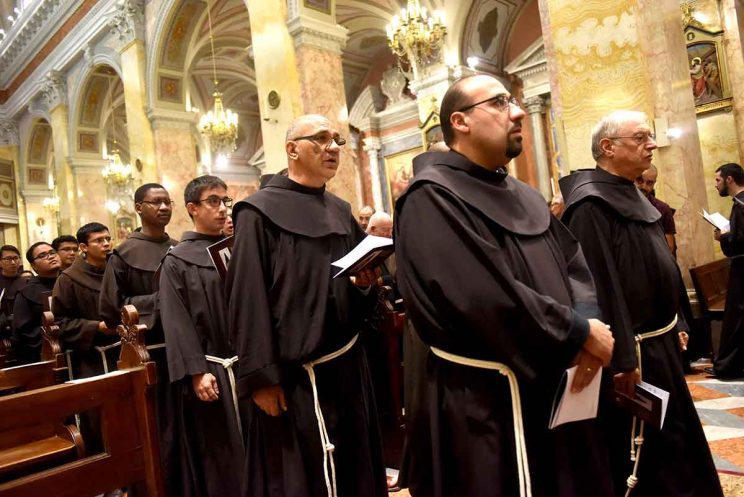 Franciscans pray during the ceremony for the opening of the celebrations of the anniversary of 800 years of Franciscan presence in the Holy Land at the church of St Saviour in Jerusalem’s Old City in October. (Photo: Debbie Hill/CNS)

The diplomatic and financial patronage of the King Robert d’Angiò of Naples and his wife, Sancia di Maiorca, were pivotal in re-establishing the Franciscans in the Holy Land. In 1342, Pope Clement VI appointed the Franciscans as the official custodians of the holy places for the Catholic Church.

They were able to fulfil their duties more or less in peace. Along the way they developed the devotion of the Way of the Cross — the Via Dolorosa — which follows the route supposedly taken by Jesus from his trial and flagellation to Golgotha. The Stations of the Cross in our parishes today developed from the Via Dolorosa, instituted for the benefit of those who could not go to Jerusalem.

An end to peace

The relative peace came to an end in 1517 when the Ottomans captured Jerusalem. First, all Christians were banished from Jerusalem. As the Ottomans did in other places, they turned some Christian buildings into mosques. In Jerusalem that fate befell the Cenacle, the Upper Room of the Last Supper, which had been the Franciscan Custody’s headquarters.

When the Franciscans could return, the playing field was changing. The Orthodox Church, with its patriarchate in Constantinople — the centre of the Ottoman empire — and consequent access to the favour of the rulers, came in great numbers to the Holy Land and could now assert themselves.

Resentment over the sack of Constantinople in 1204 by Crusaders still festered among the Orthodox, who showed little of the magnanimity that marked the Franciscan philosophy. Relationships were uneasy, and disputes were settled according to the whims of the Muslim rulers.

Throughout the 16th and 17th centuries, Franciscan friars suffered several persecutions, some of them murderous, by the Muslims and the Orthodox — and in 1799 by Napoleon’s forces. 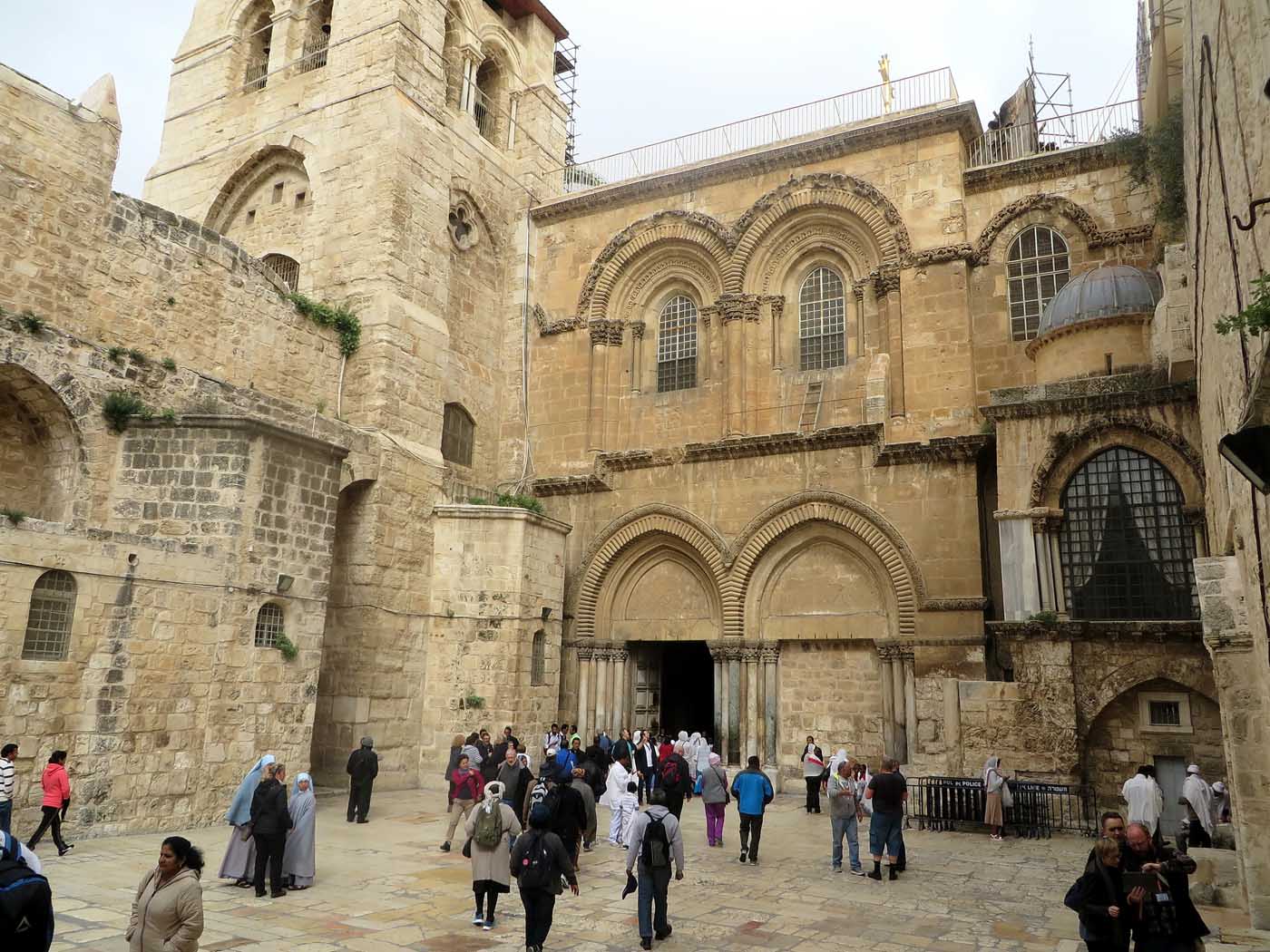 The Church of the Holy Sepulchre, which has remained largely unchanged since it was rebuilt by the Crusaders in the 12th century. (Photo: Günther Simmermacher)

Things came to a head on Palm Sunday 1757 when Orthodox monks made a violent raid on the rotunda of the church of the Holy Sepulchre — the place of the tomb of the Resurrection — and took occupation of it.

The Ottoman rulers now had enough of all the squabbling. In 1767 the sultan gave the various denominations control over their own defined areas. The Orthodox were awarded the prime area of the tomb as well as Calvary. To these, however, they were ordered to allow fair access to members of other Churches.

Known as the Status Quo and confirmed in 1827, that allocation of ownership remains in force even today. And if one group perceives that another is disrespecting the Status Quo, violence can break out. More often than not, this involves the Orthodox and Armenians, but in 2004 an Orthodox mob set upon Franciscans—because a chapel door had not been closed…

Lately relationships have improved, at the church of the Holy Sepulchre and in Bethlehem’s church of the Nativity, which is also governed by the Status Quo. Both churches have recently benefited from overdue renovations which required a consensus between various denominations which until not too long ago was difficult to come by.

At other holy sites, the Franciscans have full control. They care for 74 shrines throughout the Holy Land (including Syria and Jordan, both of which are considered part of the Holy Land). These include the basilica of the Annunciation and St Joseph’s church in Nazareth as well as shrines in Cana, Tabgha (St Peter’s Primacy), Capernaum, Mount of Beatitudes, Gethsemane, Mount Zion (St Peter in Gallicantu and next to the Cenacle), on the Via Dolorosa, Ein Kerem (churches of St John the Baptist’s Nativity and the Visitation), Shepherds’ Field in Bethlehem, Bethany, Jaffa, Emmaus (in El Qubeihbeh), Jericho, and on the Mount of Olives (Dominus Flevit), Mount Tabor (site of the Transfiguration) and Mount Nebo (place of Moses’ death in Jordan).

The jewel of them is Capernaum. In the late 19th century the Franciscans bought the land beneath which they suspected lay the lost town which was Jesus’ headquarters during his Galilean ministry.

The order had a succession of archaeologists who did important work in the field in the Holy Land. The most important of them was Fr Virgilio Corbo, an Italian whose work at the church of the Holy Sepulchre in the 1960s proved that the descriptions of Golgotha in the gospels accorded perfectly with what he found there. 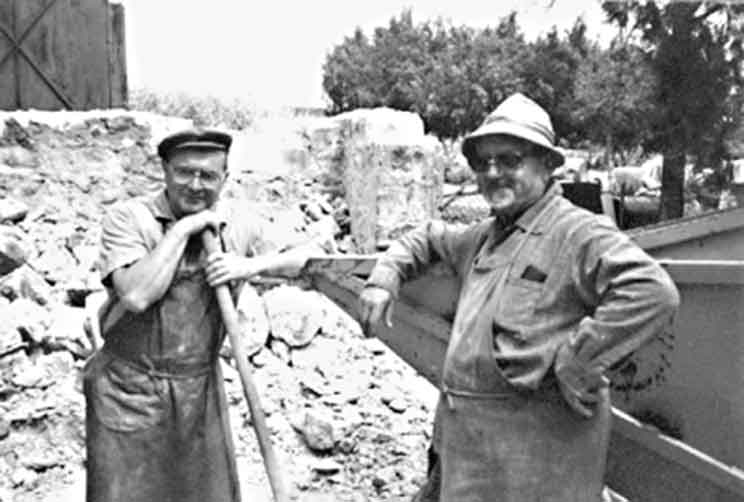 Franciscan Fathers Virgilio Corbo (right) and Stanislao Loffreda, the archaeologists who discovered the house of St Peter in Capernaum in the 1960s. Fr Corbo’s excavations in the church of the Holy Sepulchre also revealed that the site’s characteristic accord exactly with the descriptions of Golgotha in the gospels.

With his confrere and assistant, Fr Stanislao Loffreda, the mercurial Fr Corbo excavated Capernaum, revealing not only a fourth-century synagogue, the existence of which had been discovered by one of his predecessors, but also the basalt foundation of a first-century synagogue — the very synagogue in which Jesus preached and healed.

It got better: Frs Corbo and Loffreda discovered the house of St Peter; archaeology and the historical record leave no doubt that this is the place with the removable roof where Jesus stayed as a guest and where he performed miracles.

The Franciscan Custody of the Holy Land maintain these holy sites and improve them for the benefit of Christian pilgrims of all denominations from all over the world. They also run a number of pilgrims’ guest houses.

But the Custodia Terræ Sanctæ, as the Custody is known in Latin, is also deeply involved in the Palestinian community, where almost all local Christians — the “Living Stones” — come from.

The Franciscans administer many parishes to give spiritual support to Palestine’s Catholics. They also run schools, hospitals, housing projects, vocational training and many other projects for the benefit of all people who need them.

It is to support these projects and the upkeep of the sacred shrines that the Holy Land collection in our churches on Good Friday are allocated.

The Franciscans are not the only Catholic orders that run shrines, projects and institutions in the Holy Land, but they certainly are the most widespread.

The Order of Friars Minor has a special bond with the Holy Land, one that goes right back to its founder, St Francis of Assisi, eight centuries ago this year.

Go to the Holy Land, if You Can
Share