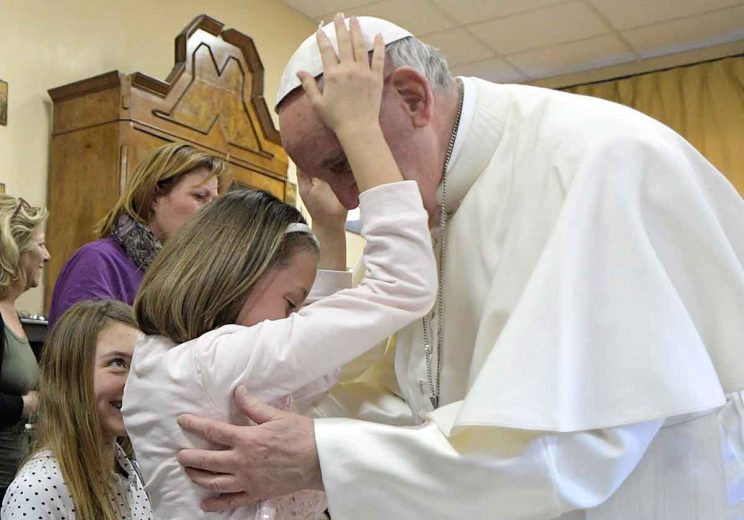 Pope Francis and a blind girl meet at a centre for the blind in Rome. Mercy is at the centre of this papacy. (Photo: L’Osservatore Romano via CNS)

It baffles me how many Christians don’t take Mathew 25 seriously as one of the crucial conditions for their salvation, even though Yeshua, the Christ, was at pains to make this clear.

“The King will reply, ‘Truly I tell you, whatever you did for one of the least of these brothers and sisters of mine, you did for me.’”

It is clear that the option for the poor and vulnerable is regarded through faith, by Christ in particular, as vital to our salvation. He even goes as far as to teach us: “But go and learn what this means: ‘I desire mercy, not sacrifice.’ For I have not come to call the righteous, but sinners.” And by this he means all of us.

There is a demonstrable preference given to powerless individuals who live on the margins of society in the both the Bible and in our Church’s canon law: “The Christian faithful are also obliged to promote social justice and, mindful of the precept of the Lord, to assist the poor.”

Term “Preferential Option for the Poor” first used in 1968

As far as I can tell the phrase “preferential option for the poor” was first used in 1968 by the superior general of the Jesuits, Fr Pedro Arrupe, in a letter to his order. It has now permeated almost all the Church’s teachings, especially social teachings. Its prevalence, perhaps, is also its downfall, for most people take it for granted, assuming that it is already being implemented.

It is worrying that when the Holy Spirit, as a way of reminding us and our era about this, gives us a pope who takes this teaching very seriously and is then attacked, in veiled attempts to discredit his message, by questioning the orthodoxy of his stand.

Worse still is when the attack is led by Princes of the Church.

Pope Francis and His Orthodox Teachings

Many of us, lay Catholics in particular, are revived by Pope Francis’ papacy. We believe he proclaims an orthodox teaching of the Catholic Church.

That he acknowledges the teachings of the Gospel, while in the attempt to have the primacy of love, allows certain latitude in the pastoral interpretation of the Gospel.

That he preaches mercy, tolerant guidance for the faithful deviant. Because he knows that the duty of orthodoxy is to inform, teach, entice and persuade our reality towards the ideal values — not to discourage and condemn.

We can see that the pope knows that when Yeshua, the Christ, was confronted by the teachers of law and the Pharisees, seeking to stone an adulterous woman in accordance with the Law of Moses, he invoked the primacy of love through mercy. He pointed out to their reality that not a single one of them, and of us, was without sin.

Sin and Grace – at the Centre of the Good News

This is what is at the centre of the incarnation. When God saw we had all sinned, he did not insist on our death but, moved by indefatigable mercy, came down to redeem our frail and fallen nature. God meets us in our reality and walks us step by step to the ideals of the Gospel. This, to me, is what grace is all about.

Pope Francis does not justify the bending of the Gospel ideals, as some seem to accuse him of doing. The pope is following Christ’s parable in allowing for the wheat and the weeds to grow cheek by jowl until harvest time. And in doing so, he gives an opportunity to the weak — which is all of us — to be irreversibly hooked on the Gospel values, which is just another way of saying: “Be ready for heaven.”

What Christ despised and preached against are the Pharisees and the lawyers who burden people with rules they themselves were not keeping; those who crush the bruised reed and snuff out the smouldering wick.

Pope Francis is of similar mind, and this is probably why he has become so unpopular with false righteous (the modern Pharisees) within and outside the Church.

I do not care to participate in the futile nomenclature of conservative or progressive — Jesus was both and neither. The only progress I am interested in is to go and learn what this means: “I desire mercy and not sacrifice.”