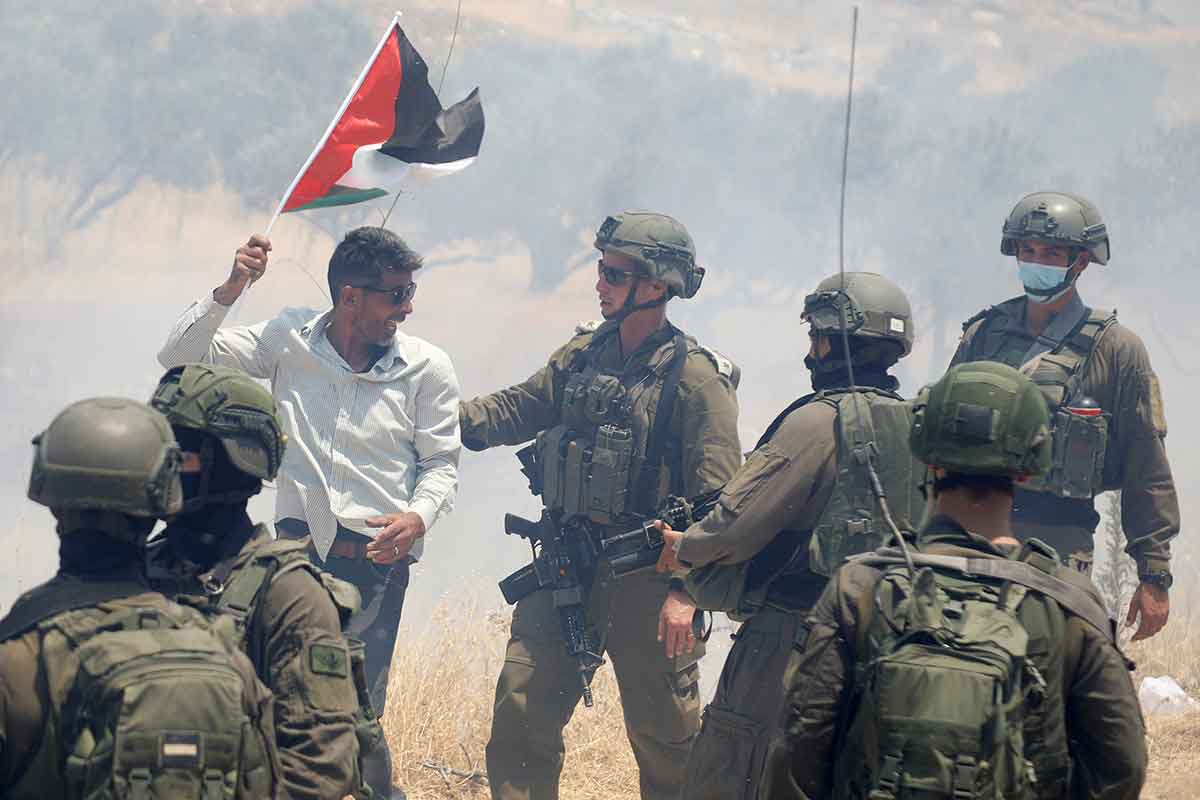 A demonstrator holds a Palestinian flag in front of Israeli forces during a protest against Israel’s plan to annex parts of the occupied West Bank, near Nablus July 3, 2020. (CNS photo/Raneen Sawafta, Reuters)

It is unfortunate when great men reveal too many secrets about themselves until they dissolve what maintains of their prestige.

This is the feeling I had as I watched the video of our chief justice, Mogoeng Mogoeng, as he tried to convince us that as a Christian, he has a moral obligation to love and support the state of Israel.

To make his point Mr Mogoeng quoted Psalm 122:6 — ”Pray for the peace of Jerusalem: they shall prosper that love thee.”

Like most people who interpret the Bible literally, he quoted the Book of Genesis to prove that the land of Palestine was promised and given to the Jewish people by God.

It is rather tiring to have to argue, in 2020, against the conflation of Zionism with the Jewish nation, as if all Jews are Zionists.

Forget the fact that Yeshua, the son of Miriam and the Christ of our faith, was also born in the Palestinian strip of land. Forget that the indigenous Christians of the land are the victims of Israel’s policies.

Sadly this conflation, proposed by most American-influenced evangelists, is also discernible in Justice Mogoeng, who is also an Evangelical pastor.

As expected, the Israel/US block is using his video to bolster their illegal West Bank land annexation proposal.

The Vatican has sternly warned the US and Israel that these plans will jeopardise all efforts at bringing peace between the Israelis and Palestinians, and further fuel conflicts.

I assume the good judge stands with Israel on this, for fear of what he calls “attracting unprecedented curse”.

This blackmail of a “curse” usually leads to an unthinking faith which serves the greed or agenda of charlatan preachers, fanatics and false prophets.

Some of us were willing to give the good judge the benefit of the doubt, because it seemed, from the video, that he was initially concerned with what he sees as a selective harsh censoring of the state of Israel by our government.

He laments, for instance, that our government maintains good diplomatic relations with countries, like Britain, who colonised us and plundered our resources with impunity.

He makes a case about the landless majority of our people whose seeds of poverty were sown by the British’s colonial land dispossession which was harvested by the apartheid regime (and, paradoxically, he reconciles that with the dispossession of the land of the indigenous people of Palestine).

But Justice Mogoeng has since made it clear, by manner and tone, that he refuses to apologise or explicate his meaning, and that he actually is a Zionist apologist. He sees the position of loving the political entity Israel, despite its human rights violations, as being principled.

This self-induced naivety by the good judge is flabbergasting. For one thing, Israel is currently committing human rights atrocities that are bordering on the genocidal against the Palestinians. And the occupation of the West Bank (never mind annexation of that land) is, as a judge should know, in violation of international law

Yet he wants us to forgive their murder and plunder because it is done in the name of God, to fulfil an interpretation of scripture that serves the greed and cruelty of rapacious theocratic nationalism.

History, from Troy to Pretoria, is replete with this religious fanaticism of a people implicating God to justify their crimes against other peoples or nations.

Lest we forget, apartheid was founded on the discriminational notion of volkekunde.

Zionism is a political land-grabbing ruse, with tenuous roots in the biblical Jewish strain of messianic movements.

It is not, nor has it ever been, the precept of God towards the reconfiguration of the Jewish nation.