Priest: My Time as Bandits’ Hostage 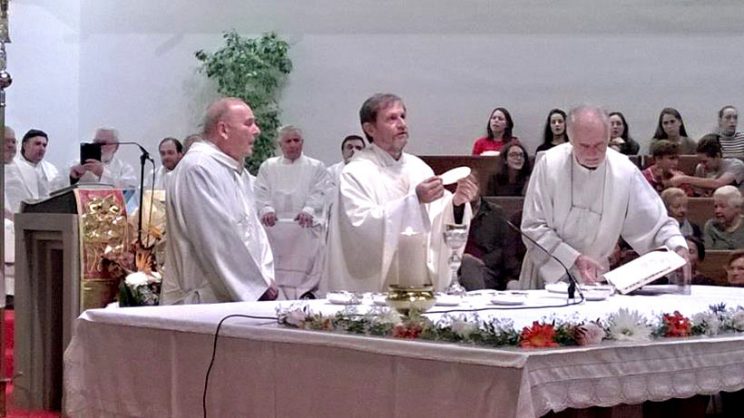 Fr Maurizio Pallù (right) at a Mass in Florence, Italy, following his release from captivity in Nigeria. He was kidnapped, for the second time in almost exactly a year, in October and held in a forest.

Last month, Fr Maurizio Pallù was kidnapped and held in captivity by bandits. Here the 63-year-old Italian diocesan priest, who serves in Nigeria as a missionary of the Neocatechumenal Way, tells his story of facing fear with hope and prayer.

I  was on my way to Benin City where the bishops of Nigeria celebrated Nigeria’s consecration to the Virgin Mary. I wanted to be there on October 13, the centenary of the last apparition of Our Lady in Fatima, to whom I have a great devotion.

Instead I spent October 13 in a forest.

We were held up on the road. The bandits came out shooting and then took us to the forest.

There were three of us; it was a band of kidnappers. We walked quite a long way to a lonely place, and then we were there. They had little to eat, they gave us what they had. We drank the water of the creek—a water of brown colour.

But in that forest I received a sign of Mary’s maternal attention.

Last year I had an even stronger experience. On October 13, 2016 we were attacked in another Nigerian city by bandits who kidnapped us. They were pointing a gun at us for an hour and a half. They stole the little money we had, but we managed to survive.

The Miracle of the Sun

This year the attack happened on the vigil of the feast of the Madonna of Fatima — the Miracle of the Sun — and the Madonna pulled us out.

Now, my first conclusion is this: if the devil unleashes such a big battle for four poor people — a cretin like me who goes to announce the Gospel — it means that what is behind is immense.

I can’t even evaluate it because every time we go out to evangelise, there is an attack. And then there is an intervention by the Madonna who is stronger than the devil’s attack, and it frees us.

But it doesn’t just free us; it also doubles up our strength!

One thing is certain: after this experience my faith has grown, my hope has grown, and my charity has grown — and I know that I did nothing there.

We were three hostages: apart from me, there was a female student and an accountant, both Nigerians.

I did my examination of conscience. I asked myself whether I was ready to die now. “No, Lord I am not ready to die because I still have not expiated my sins, and not done sufficient contrition. If you, Lord, concede me a few more years of life, I promise to multiply my zeal to bring many souls to you.”

This is what I said: “Let me live because I want to fight the devil so much, with the help of the Virgin Mary.” This is what I prayed constantly.

I prayed for my fellow hostages; I tried to assist them. They were a little more worried than I was — and I was so afraid inside…

Conversation with a bandit

I saw a response from the Lord. On October 13, the day after our kidnapping—the feast of the Miracle of the Sun—the heart of the bandits’ leader softened, became a little more tender. We started to maintain a dialogue.

I told him: “You are my brother; I pray for you. You are not my enemies; I pray for all of you.”

“Pray, pray, for me”, he said. And so we started establishing a relationship…

One thing that I have discovered in all these years of life is that the distinctions we make are inexorably wrong when we say: “Muslims, Christians, good, bad, adulterous, pure…”

That’s why this pharisaic attitude is always dangerous: to divide people into good and bad; creating a cast of “pure” ones.

I was not pure in that situation in the forest, my intentions were not necessarily pure…

I said to the leader of the robbers—he was the only one who spoke English, the others were speaking Hausa—that in this endemic corruption in Nigeria, perhaps I’d be violent, too.

“I can be violent. You can ask my mother how sometimes I was throwing objects in the air. What did I throw in the air today? If I was a bit annoyed, maybe I threw the telephone in the air. So I am a violent person. How can I judge you?”

I saw that they did not feel judged.

At the end of the day, either we think that St Francis was a fool in his forgiving approach to the Muslims who took him prisoner at Damietta, or we think that he was making Jesus Christ present.

Here I’d like to make it clear that I have nothing in common with St Francis, but the following is certain: it is not true what the World says that if you are like the sheep you will be eaten alive. The one who is like the sheep wins. He may lose in this world but he wins in the world to come.

In the forest, I said: “Lord, if you want us to die, take us all to heaven; me and the others. I offer my life for their salvation even though I’d like to remain here…”

The bandits’ leader offered me a cigarette, on that October 13, and said: “Smoke, smoke.” I replied: “I don’t like these cigarettes; the cigarettes in Tuscany are better.”

Sunday, the 15th, was a very difficult day because of a blood-thirsty member of the gang. I believe he was possessed by the devil, for various reasons that I noticed. He really wanted to kill.

It was obvious that he wanted to kill because he would grab a stick and viciously hit the accountant, a Muslim, with it. At night we were in chains and he was hitting him.

The leader realised this and said: “He is a very evil man, a very wicked man, he is bad…”

I thought if this one doesn’t go away… So I prayed. I implored Carmen Hernandez, the late co-founder of the Neocatechumenal Way, and the Madonna.

“Father,” I prayed, “please take this bloodthirsty man away because this one will kill us all, he is not interested in money—he is interested in spilling blood…”

On that Sunday the leader sent him home. You can interpret this any way you want but this is a fact. First there were eight bandits, and then there were five—and most importantly without the dangerous one.

I started thinking that perhaps we would manage to come out this alive.

Only beer was missing

In the evening our captors were so happy that they went out to hunt. They killed some wild rabbits and roasted them, and they gave some to us, so we had a barbecue— only the beer was missing.

Overall we ate pretty badly, but in truth, food was the least of our preoccupations. I was never really hungry even though I normally have an appetite.

The adrenaline, the fear of dying, is really strong and you are not hungry. What affects you is thirst… so we drank the brown water they had. They were drinking and eating the same drink and food that they were giving us.

On Monday and Tuesday I managed to pray the lauds. The student, a Protestant, had a bible so asked her if I could borrow it.

What struck me was that on Sunday I had still been too afraid, though I prayed the rosary a lot. But on Monday I relaxed a little.

I picked the psalms at random—they helped me so much in captivity. The first was Psalm 18, then I skipped forward five to Psalm 23: “The Lord is my shepherd, I don’t need anything even if walk in the dark, I do not fear because You are with me…”

And then four psalms forward to number 27: “The Lord is my light and my salvation—whom shall I fear? Even if an army besiege me… I will be confident.”

Then I opened the New Testament, also at random: Acts 10. Cornelius: God regards all the men in front of him as pure.

Here all men in front of God were Muslim. This wasn’t a religiously inspired kidnapping, but they were all Muslim. Every man is pure in front of God because he was purified by Christ’s blood.

This helped me. This was my experience.

On Tuesday we were freed and left near the road.

I’m not a hero

My experience is that I did nothing over these days. I absolutely don’t feel like a hero. I was very afraid. I was an obstacle to the actions of the Lord, but I saw the power of our Lord’s grace. No-one will take this away from my heart: the power of the Lord’s grace which acted in my poverty and saved me.

What sustained me was the Christian community, the prayers… Here we do not have great evangelisers, here there are no great preachers, big stars—we are all small fry. But there is a body, there is a community of the poor, sinners where the sin, the weakness, illuminated and sustained by the grace of God, becomes a force, and creates communion, and this is what I wanted to testify with my experience.

I am grateful to God. I thank him for his actions through the community, because this is where the force is.

Without the community you are lost because the man who is alone gets devoured in the world with its many attractions that make him even more alone.

JRR Tolkien’s The Lord of the Rings touches me because there is this community of hobbits—and these persons of short stature save the world. Aragorn, this great, beautiful hero, says that the only thing that we have to do is to wait for this half-slave to take the ring and throw it inside. We just have to gain some time.

This is what I felt profoundly in those days of my captivity. I can only gain time by praying, awaiting that Christ, through the poor, will destroy the work of the devil.

Although it seemed that the devil dominates the world, this is not true. CHRIST IS RISEN!