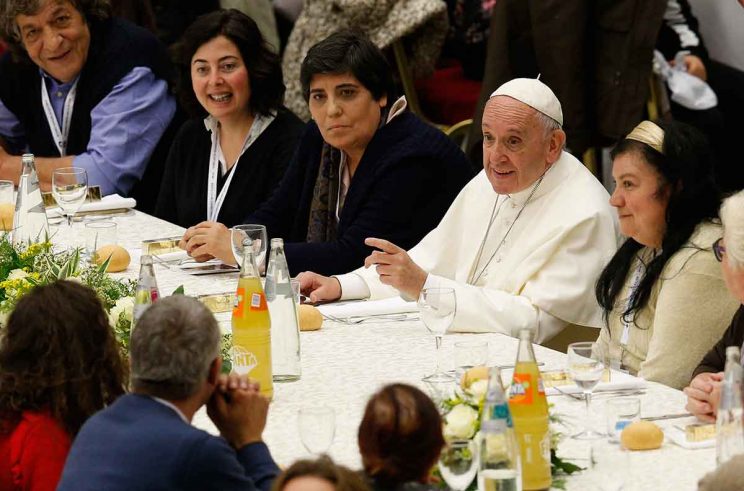 Pope Francis eats lunch with the poor in the Paul VI hall after celebrating Mass marking the first World Day of the Poor at the Vatican Nov. 19. Some 1,200 poor people joined the pope for the meal. (CNS photo/Paul Haring)

When was the last time you shared a meal with a poor person? For Pope Francis it was just a couple of weeks ago.

On Nov. 19, the Holy Father celebrating the first World Day of the Poor broke bread with not only one poor person, but with some 1,200 poor brothers and sisters . And in doing so he gave us a humble example of what being in solidarity with the poor looks like.

In the homily during the Mass  which preceded his meal with the poor, Pope Francis reflected on Jesus’ parable concerning the talents given to three servants in Matthew’s Gospel .

Now while talents in the New Testament refer to large monetary units, the church has traditionally expanded the meaning of talents to refer to all of the generous gifts God has given each of us.

A central meaning of the parable is that each of us is expected by God to seriously use and develop the gifts he has given us in the ways that please him.

How Can We Please God?

So the Holy Father asked “How, in practice can we please God?” He said, “When we want to offer something to the Lord, we can find his tastes in the Gospel.” Citing the last judgment scene, he pointed out that God is most pleased when we tirelessly serve our poor and vulnerable brothers and sisters – “the hungry and the sick, the stranger and the prisoner, the poor and the abandoned, the suffering who receive no help, the needy who are cast aside.”

The pope reminded us of the Master’s strong rebuke of the servant who did not use his talents to bear fruit, but only gave back what he received. The pontiff said that the servant’s evil was that of failing to do good. Here he warns us to attentively avoid the serious sin of omission and indifference towards the poor.

“All too often, we have the idea that we haven’t done anything wrong, and so we rest content, presuming that we are good and just. But in this way we risk acting like the unworthy servant: he did no wrong. … But to do no wrong is not enough.”

What are we doing with the talents God has given us? Are we steadfastly developing our gifts for the greater glory of God by generously and justly using them in tireless service to our needy brothers and sisters near and far?

And are we insisting that our regional and national representatives in government use the financial gifts we have entrusted them with – namely our taxes – to adequately serve each and every poor and vulnerable human being?

Although 300 million children go to bed hungry every night according to the U.N. Children’s Fund, the U.S. Congress allocates only less than 1 percent of the federal budget for poverty-reduction aid. That is shameful.

Persistently lobbying our legislators to provide much more of our tax money towards ending hunger and poverty is one essential way to faithfully use our talents.

And how can we more effectively use the collective talents in our parishes to meet the immediate needs of the poor, and attack the root-causes of poverty?

Pope Francis wisely urged us to “not seek for ourselves more than we need, but rather what is good for others. … What we invest in love remains, the rest vanishes.”