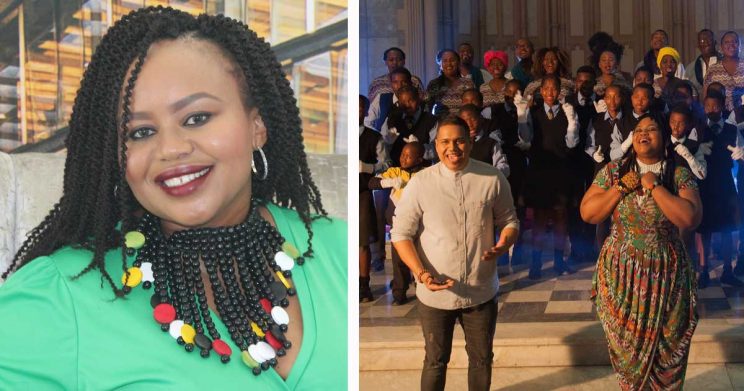 Thandeka Dube-Ndhlovu and Justin Nanak with the KwaThintwa School for the Deaf in the video for “The Mighty One”. (Photo: Lwandile Ngubentombi) The song was written in English, isiZulu and sign language.

Pilgrims to the Mini World Youth Day in Durban this week will frequently hear the event’s theme, “The Mighty One”. It was co-written by Thandeka Dube-Ndhlovu and who tells of how the song came about and how she serves her community.

The co-writer and singer of the official theme song for Mini World Youth Day (MWYD) says being a part of this collaboration was a God-given opportunity and blessing.

Thandeka Dube-Ndhlovu is a choir member in her parish of the Immaculate Conception in Pinetown, Durban, and a member of the St Anne’s Sodality Diocesan Choir.

She is no stranger to music. Her first attempt at writing music was back in 2010 when she auditioned for a talent search hosted by One Gospel.

But the MWYD anthem, titled “The Mighty One”, is the first song that she’s written that has been recorded.

She attributes praise and worship, as well as life experiences as her inspiration for her songwriting.

The praise-and-workshop ballad written for MYWD, which is taking place in Durban from December 6-10, is based on Luke 1:49 (“…for the Almighty has done great things for me”) which is also the theme for Mini World Youth Day 2017. The MWYD forms part of the global build-up to the international World Youth Day, which will be held in Panama in 2019.

The anthem was co-written with Justin Nanak, a good friend of Ms Dube-Ndhlovu.

“Justin called and told me that he had been commissioned by the presidium for MWYD, which includes Cardinal Wilfrid Napier, to work on the theme song, and he thought we should co-write it in English and in Zulu,” she said.

“I was very excited at the news, and even more excited when he told me about the theme because I could think of countless things that ‘The Mighty One’ has done for me and everyone around me. So I immediately knew that composing a song based on that scripture would come naturally.”

The record was produced by seasoned producer Karen van Pletsen, who also served as creative director for the video, which is in English, isiZulu and sign language.

Kwa Thinta School for the Deaf

For the latter, they worked with the KwaThintwa School for the Deaf, which was founded by the late Archbishop Denis Hurley, to sign the song.

“The idea was for the song to reach as wide an audience as possible, so when our producer suggested the signing choir, we were over the moon,” Ms Dube-Ndhlovu said.

On the day that the video was recorded they first performed the song by themselves from start to finish. “I am not exaggerating when I tell you that there wasn’t a dry eye in the room at the end of the performance,” Ms Dube-Ndhlovu said. “I still get teary every time I watch the video.”

Working with the KwaThintwa choir was “such a moving experience for all of us, and the feedback has been amazing so far—the song has touched people’s lives in a big way, even those who are not religious,” she said.

Ms Dube-Ndhlovu believes that gospel music, and religious songs of whatever faith, can make a difference to changing people’s worldview, “because they portray a message of love, a message of hope, and in the case of ‘The Mighty One’ they also portray a message of great things that the Lord has done—and if that cannot change people’s view of the world, then nothing will”.

The musician is very involved in youth faith networks and encouraging young people to make a difference in the world. As a member of the St Anne’s Sodality, a women’s organisation whose motto is “To serve the family, to serve the Community and to serve the Church”, her concern is the wellbeing of the community, especially the youth.

“We encourage the youth to take part in the various activities within the Church to keep them off the streets, and away from societal ills,” she said.

“We also raise funds to supply those from underprivileged communities with school uniforms and various other necessities,” she said. “We identify specific families within communities who are in need, we visit them and we supply them with basic needs.”

Her family also recently partnered with Imbeleko Foundation which provides holistic education and support for vulnerable children in the Valley of a Thousand Hills. “We donated family land in the valley for the building of Imbeleko Arts Centre. I will be joining the founder Sibusisiwe Myeni in the arts centre, and will be working with the youth specifically in music projects,” Ms Dube-Ndhlovu said.

Asked what advice she would give to aspiring songwriters, she said: “Keep at it, don’t give up, your opportunity may be around the corner, and remember to always put God first.”

The video for “The Mighty One” can be seen at