The Magician Who Wanted to Be a Priest 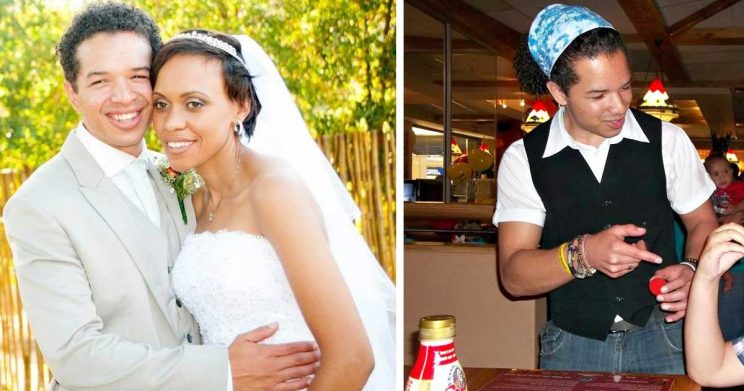 Keenan Williams performs magic in a restaurant. Keenan and his wife Nicolette at their wedding in 2016.

Keenan Williams, a radio presenter and magician, wanted to become a priest, but God had other plans for his life, as he told ERIN CARELSE.

Radio DJ and magician Keenan Williams always felt a calling to become a priest; even the old grannies at church would tell him that they were praying for his vocation. But God had other plans for him.

Keenan, who was born in Athlone, Cape Town, in 1991, is the son of Michael and Anthea Williams, and also the grandson of the late Deacon John Williams who served the parish of Our Lady Help of Christians in Lansdowne.

His parents had him baptised a Catholic at St Mary of the Angels in Athlone but later became members of St Matthew’s Anglican church in Claremont. There he served as an altar server from a young age and also made his First Communion.

A Yearning for the Priesthood

He recalled a tough childhood. Attending Kenwyn Primary School, he was not academically inclined and failed Grade 1. He had to repeat the year and was picked on by his peers. The name-calling turned into verbal abuse, even into his high schooling years, and he became a victim of bullying.

“I suffered from mild depression and hid the truth from my parents until after I had matriculated,” Keenan said. Taking part in sporting and music activities — he played the saxophone till Grade 10 — became a coping mechanism to help deal with the stress.

Throughout his schooling, he knew that he wanted to one day get into the seminary and study to become a Catholic priest. But the journey wasn’t easy. He attended several vocations festivals and had regular meetings with his parish priest to discuss his vocation.

“Much prayer and discernment is needed” before entering the seminary, Keenan said.

The late Salesian Father Vincent Ford once told him: “It’s not necessarily what you may want for your life but what God wants from you to enhance his Kingdom here on earth.”

After matriculating in 2010, Keenan took his parents’ advice to take a year off.

His father was now a priest in the Anglican Catholic Church (which continues in the Anglican movement but is separate from the Anglican Communion), studied for the Roman Catholic priesthood, and was a brother with the Servants of Christ the Priest. He urged Keenan to pray some more during his gap year, to decide whether the vocation was for him.

The Salesians, Radio and Nicolette

Keenan got a job at Salesian Life Choices and was tasked to run life-skills sessions in high schools across the Western Cape and to equip peer educators to conduct sessions for their fellow learners.

He was selected to represent Life Choices at an African HIV/Aids conference and awards ceremony in Addis Ababa, Ethiopia. The organisation won the award for its Dream2B programme, which Keenan brought home.

In 2012 he met Nicolette from Stellenbosch, and the two began dating. But soon he quit his job, took his savings, and travelled.

He went through to Port Elizabeth, Johannesburg and Pretoria to visit schools and youth groups where he combined comedy and magic into a motivational talk about his upbringing and how he overcame his depression.

Living with the priests and religious of the Salesian Congregation at the Bosco Youth Centre, as well as with a priest friend in Capital Park, Pretoria, he continued his prayer and discernment.

Returning home, his childhood passion for wanting to become a radio DJ was reignited. He applied to study journalism at City Varsity and thanks to an inheritance left by his grandmother, he was able to do the one-year certificate course in 2013.

During his studies, he worked at a new local radio station as an on-air presenter and voice-over artist. Later in the year, he began working at a Christian radio station as a reporter and news compiler. He quickly moved up the ladder to anchor the afternoon news and got his own show as a presenter.

Since January 2016 he has been content producer for 702/Cape Talk. And when he isn’t doing that, he gets much joy from performing magic for children at Spur restaurants throughout the Cape Peninsula.

In 2015, he concluded that the priesthood was not his calling — and decided he wanted to marry Nicolette.

“After much plotting and planning to ensure the engagement was a surprise, I popped the question on Heritage Day. We had the family gather at a restaurant under the pretence that it was my dad’s tenth anniversary of his ordination—it was in that year but not that month. I opened with a prayer, then laid the ring out in front of her, went down on one knee and prayed to the Heavenly Father ‘that this beautiful woman you have created will give me a positive answer to my question’”. She said yes.

They married in March 2016. Keenan’s father did the honours by celebrating the nuptials.

Keenan and his wife live in Kuils River and attend St Ninian’s church in the area. The two, who live with their two dogs named Popeye and Olive, enjoy hiking, watching movies, hosting family for a braai and travelling.

“Throughout my life I wanted so badly to become a priest, but God had other plans for my life,” Keenan said. But just because he is not wearing a clerical collar doesn’t mean that he cannot bring people closer to Christ, he added.

We Have The Living Word in our Hearts

“I may not be standing on the street corners with Bible in hand preaching the word of God, but I do believe that each of us, no matter where we may be finding ourselves, has the living Bible written in our hearts,” Keenan said.

“The only way to establish the Kingdom of Heaven here on earth is by sharing the love of Christ and peace of God with everyone we meet. After all, we were all baptised to be priests, prophets, and kings.

“Who knows, maybe one day Catholic priests will be allowed to be married. I pray for that, as I saw the benefits of being a son of a married priest. But for now, I will enjoy my vocation to the married life and all the fun, laughter, and challenges which come with it.”

Keenan Williams will start a new column in The Southern Cross in the new year.