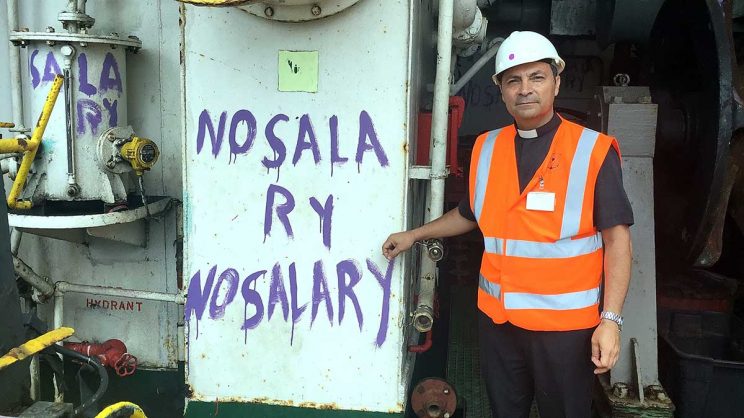 Durban port chaplain Fr Herman Giraldo of Catholic sailors’ charity Apostleship of the Sea stands next to seafarers’ graffiti on the tug/supply ship PSD2, detained in Durban, whose crew have not been paid for many months.

When a group of seafarers were left in limbo in the port of Durban  after their ship was detained following the non-payment of wages, Catholic charity Apostleship of the Sea (AoS) came to the rescue.

The crew from tug/supply ship PSD2 had not been paid for up to 15 months. They also needed food and fresh water, and two crew members were in need of immediate medical attention.

The Tanzanian-flagged vessel, which arrived in Durban from Mozambique, was also found to be infested with rats and cockroaches.

AoS and chaplains from other organisations in Durban port have been providing assistance to the 11 seafarers, one of whom is Catholic.

AoS Durban port chaplain Fr Herman Giraldo said conditions were quite dire and there was an atmosphere of hopelessness when he first visited the crew to bring them food.

“They were tight-lipped and did not want to speak about their situation. We eventually found out that they were owed nine months’ wages; one hadn’t been paid for 15 months. Apparently the company kept delaying payment, promising to pay ‘next week’ but never doing so,” Fr Giraldo said.

After not being paid, seafarers desperately needed money to send home to their families.

AoS was able to secure an emergency grant of about R17000 from the international body The Institute of Marine Engineering, Science and Technology for medical bills, food and sanitation.

“A pest-control firm was brought in to fumigate the ship,” Fr Giraldo said, “and a doctor came on board to treat the two crew members who needed medical attention. One had a heart condition but his medication was out of date, while the other had burnt his arm and could not be treated as their first-aid kit was almost empty.”

Repatriation of the crew will follow as soon as their passports have been renewed.

“Arrangements are being made for the vessel to be sold and the men are expected to get paid when this happens,” Fr Giraldo said.

Priest To Swing A Leg At Tea Dance
Share