Unity in Baptism: Christians Recognise God’s Grace in One Another 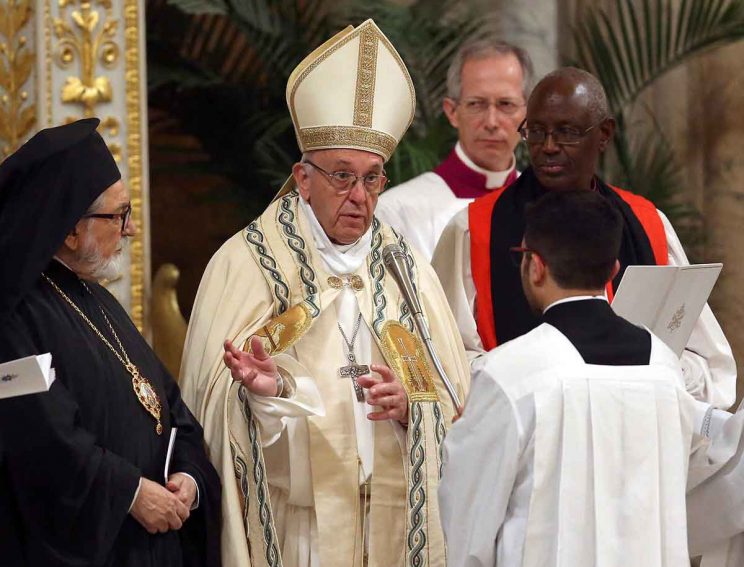 Pope Francis presides over an ecumenical prayer service  with Orthodox Metropolitan Gennadios of Italy and Malta and Anglican Archbishop Bernard Ntahoturi, the archbishop of Canterbury’s personal representative to the Holy See, at Rome’s Basilica of St. Paul Outside the Walls. The service marked the end of the Week of Prayer for Christian Unity. (CNS photo/Alessandro Bianchi, Reuters)

We Are Part of the Redeemed People

When different Christian churches recognise the validity of one another’s baptisms, they are recognising that God’s grace is at work in them, Pope Francis said.

“Even when differences separate us, we recognise that we are part of the redeemed people, the same family of brothers and sisters loved by the one Father,” the pope said at an ecumenical evening prayer service closing the Week of Prayer for Christian Unity.

The weekends on the feast of the Conversion of St. Paul, and the papal vespers are celebrated at Rome’s Basilica of St. Paul Outside the Walls, the church where, according to tradition, the apostle is buried.

At the beginning of the prayer service, Pope Francis stood before what is believed to be St. Paul’s tomb, accompanied by Orthodox Metropolitan Gennadios of Italy and Malta and Anglican Archbishop Bernard Ntahoturi, the archbishop of Canterbury’s personal representative to the Holy See.

Song of Miriam and Moses

The theme of the 2018 week of prayer was “Your right hand, O Lord, glorious in power,” which is taken from the song of Moses and Miriam in the Book of Exodus. It is a song of praise to God for having saved the Israelites as they crossed the Red Sea.

In his homily, Pope Francis said the early church theologians saw the parting of the Red Sea, the drowning of the Pharaoh’s forces and the safe passage of the Israelites as an image of baptism.

“Our sins are what was drowned by God in the living waters of baptism,” he said. “Sin threatened to make us slaves forever, but the force of divine love overpowered it.”

Precisely because Christians have experienced God’s “powerful mercy in saving us,” they can pray together and sing God’s praises, he said.

Another lesson from the crossing of the Red Sea, the pope said, is that while it involved individuals being saved by God, it also involved a community.

Paul Went to the Gentiles

And after St. Paul was knocked off his horse and converted, he said, “the grace of God pushed him to seek communion with other Christians, immediately, first in Damascus and then in Jerusalem.”

“That is our experience as believers,” the pope said. “Bit by bit as we grow in the spiritual life, we understand better that grace reaches us together with others and that it is meant to be shared with others.”

“When we say we recognise the baptism of Christians from other traditions, we are confessing that they, too, have received the forgiveness of the Lord and his grace is working in them,” Pope Francis said. “And we accept their worship as an authentic expression of praise for what God has accomplished.”

But, he said, like the Israelites who wandered through the desert after passing through the Red Sea, Christians today face difficulties in their journey together. Some even face the danger of martyrdom simply because they are Christians.

And, like people of many religious traditions, there are millions of Christians in the world who fleeing from conflict and poverty or who are victims of human trafficking or are starving “in a world increasingly rich in means and poor in love,” the pope said.

Armed With Only Jesus

But united in baptism and strengthened by God’s grace, he said, Christians are called to support one another and, “armed only with Jesus and the sweet power of his Gospel, to face every challenge with courage and hope.”

Earlier in the day, meeting with a delegation from the Evangelical Lutheran Church of Finland, Pope Francis said the greatest ecumenical challenge is to proclaim together faith in God and Jesus Christ to an increasingly secularised world.

And acting together on that faith, he said, Christians must ask for God’s grace to become instruments of his peace.

“May he help us always, amid divisions between peoples, to work together as witnesses and servants of his healing and reconciling love, and in this way to sanctify and glorify his name,” the pope told the Finnish delegation. By Cindy Wooden Catholic News Service