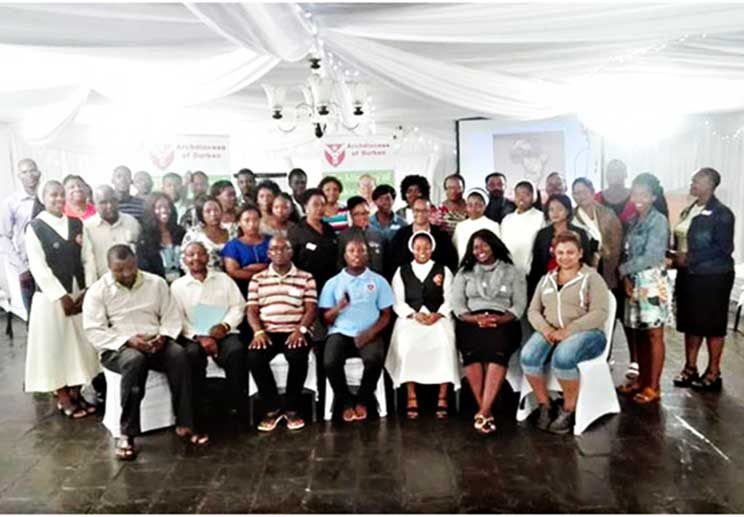 Over three days, the 55 participants, from the age of 18-85, were trained on how to advocate and how to be agents of change.

They also discussed issues such as the culture of rape, abuse in all its forms, and a Catholic way of building peace and trust while people voice their concerns in a Christian manner as an alternative to violence.

Fr Mbatha explained the history of J&P, and Fr Xaba went through the Catholic pastoral cycle.

Mr Mafinyori was welcomed by many as they remembered him well from his work on gender justice.

The sessions on rape culture and abuse saw even a man of 82 speaking out against the abuse of women, children and the elderly.

Most participants were concerned that families still don’t report cases of rape that occur in family settings. Mothers still don’t believe their daughters when they report having been raped by their fathers, uncles, brothers or cousins.

The workshop urged that women, especially mothers, be made aware that rape by a family member is still rape, and a crime.

Dr Shonhiwa took the participants through a process called AVP, standing for Alternative to Violence.

Those attending learnt how to build peace within their homes, churches and the entire communities. While it is right to voice dissatisfaction against organs of the state, protest action shouldn’t be violent and infringe on the rights of others, the workshop agreed.

Mediation processes or community dialogues should be arranged to address social issues — not burning clinics, schools and cars.

Mr Senyane took the group through processes of democracy to highlight that advocacy goes hand in hand with democracy.

Participants were asked to come up with advocacy strategies on locally relevant topics such as health, drugs and alcohol, child abuse, and teenage pregnancy.

“The aim of these advocacy in action strategies is to educate peoples on how they can help their own communities to rid themselves of these social ills and not wait for the government, which has failed, or the police, which we know is failing many communities in KwaZulu-Natal when facing the issue of drugs,” Mr Senyane said.