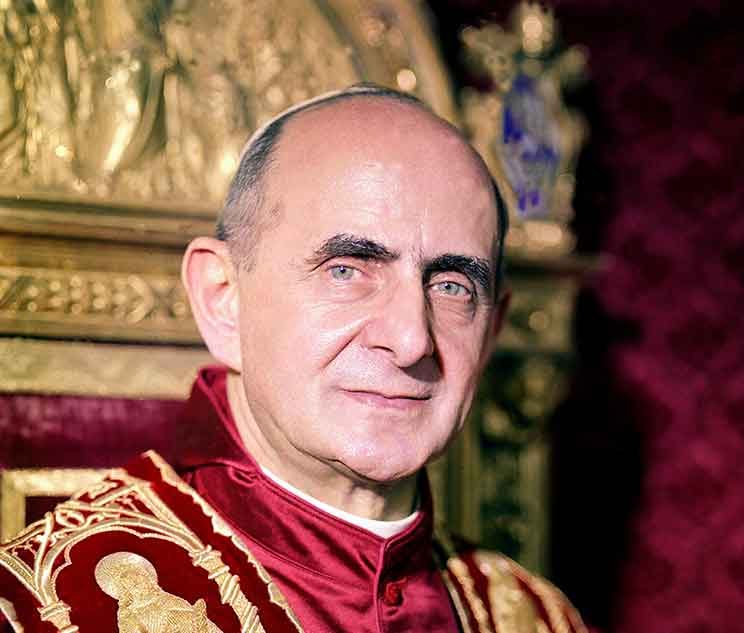 While Pope Francis thinks Blessed Paul VI wrote “the greatest pastoral document that has ever been written,” great writing does not make a pope a saint.
A saint is a person who has lived a holy life to an extraordinary degree. The Catholic Church officially has recognised thousands of women and men as saints, and it honours millions more, unnamed and unnoticed, on All Saints Day each November.

Pope Francis said in mid-February that he would add Blessed Paul VI to the host of formally proclaimed saints this year.

Should the Church Canonise Popes?

Particularly after the death of St. John Paul II, the pastoral wisdom of canonising popes has been the object of debate. After all, one reason for so publicly and formally recognising a person as a saint is to provide modern Catholics with models to imitate in their own striving for holy living, and the life of a pope is not exactly that of an average Catholic.

But the Catholic Church also canonises certain women and men to highlight specific Christian virtues at a specific time.

For example, while it obviously was not the only reason, the canonisation of St. John Paul II in 2014 – just nine years after his death – could be seen as affirming before the world the dignity and value of human life even when it is obviously fragile. And the canonisation of St. Teresa of Kolkata in 2016, during the Year of Mercy, highlighted how receiving God’s mercy should lead to sharing it with others, particularly in concrete works of mercy.

That Pope Francis has a similar point to make about Pope Paul VI, who led the church from 1963 to 1978, can be seen in comments he has made about his predecessor throughout the five years of his own papacy.

The remarks go well beyond his repeated praise for “the greatest pastoral document that has ever been written,” a reference to “Evangelii Nuntiandi,” the 1975 apostolic exhortation on evangelization in the modern world. Pope Francis’ own “Evangelii Gaudium” (“The Joy of the Gospel”) pays tribute to it, not just in its title, but in its whole focus on the obligation of every Christian to “go out,” joyfully sharing the faith with others.

Asked by Catholic News Service about the commonalities between Pope Francis and Blessed Paul, Father Carlos Maria Galli, dean of the faculty of theology at the Catholic University of Argentina, sent a 29-page essay he wrote on the topic. The central point of contact, he said, is “the communion of both with the Good Shepherd and on the mission of communicating the joy of Christ.”

Father Galli identified a long list of commonalities, including: their devotion to the Scriptures and the Eucharist; sensitivity to modern cultures; commitment to the reforms of the Second Vatican Council; “a great ecumenical heart” and commitment to interreligious dialogue; and, “above all, a life shaped by pastoral charity.”

For both, he said, a bishop or priest must be “a shepherd who goes before, beside and behind the flock entrusted to them.”

Members of the flock, however, can and do disagree with their shepherd. The very public criticism of both popes is another thing the two share. For Pope Paul VI, the criticism honed in on the Second Vatican Council and, especially, on “Humanae Vitae,” his 1968 encyclical on married love that included a reaffirmation of church teaching against artificial contraception. For Pope Francis, it’s a pastoral style that seems to downplay rules and regulations; that is particularly true with the question of Communion for divorced and civilly remarried Catholics.

“After ‘Humanae Vitae,’ many difficulties and misunderstandings emerged that were the result of all of the tension accumulated in the first years after the council,” said Msgr. Gilfredo Marengo, a professor of theological anthropology at Rome’s Pontifical John Paul II Institute for Studies on Marriage and Family and leader of a group of scholars researching how and why Pope Paul wrote the encyclical.

Paul VI was well aware of the upheaval and “suffered greatly because of it,” Msgr. Marengo told CNS. “‘Evangelii Nuntiandi’ was his attempt to close a problematic season in the life of the church – a season in which opposition to ‘Humanae Vitae’ was just the most noticeable sign – and set the church again on the path of mission and evangelisation.”

Lonely Journey: Joy and Trust in the Lord

In “Amoris Laetitia,” his document on the family, Pope Francis cites “Humanae Vitae” as Pope Paul VI’s contribution to church teaching on marriage and family life. The fact that Pope Francis quotes the document “excludes any formal distancing by Francis from this part of the magisterium of Paul VI,” Msgr. Marengo said, apparently responding to persistent rumours among a small group of Catholics that Pope Francis, with Msgr. Marengo’s help, was preparing to “lift the ban” on artificial birth control.

Speaking to a group of pilgrims from Brescia, Italy, Pope Paul’s home diocese, Pope Francis said his predecessor had “experienced to the full the church’s travail after the Second Vatican Council: the lights, the hopes, the tensions. He loved the church and expended himself for her, holding nothing back.”

And, beatifying Pope Paul in 2014, Pope Francis noted that even in the face of “a secularised and hostile society,” Pope Paul “could hold fast, with farsightedness and wisdom – and at times alone – to the helm of the barque of Peter while never losing his joy and his trust in the Lord.”
Pope Francis referred to him as “this great pope, this courageous Christian, this tireless apostle,” who demonstrated a “humble and prophetic witness of love for Christ and his church.”

Those are qualities that make a saint. By Cindy Wooden, CNS