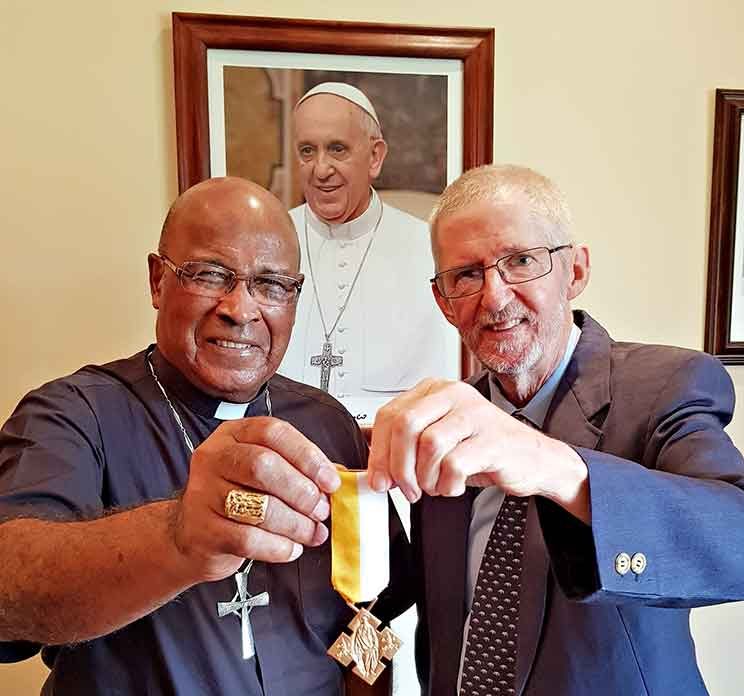 Durban Catholic Paddy Kearney was presented by Cardinal Wilfrid Napier with the papal Bene Merenti medal at a Mass in Emmanuel cathedral.

Mr Kearney worked very closely with the late Archbishop Denis Hurley as well as with his successor, Cardinal Napier. He helped establish Diakonia Council of Churches, which he headed for many years.

In recent years he helped found and now chairs the Denis Hurley Centre, which brings together people of different faiths to help serve the poor in the centre of Durban.

Mr Kearney wrote the first full biography of Archbishop Hurley, Guardian of the Light, and edited books of writings by the archbishop.

He has received an honorary doctorate in theology from the University of KwaZulu-Natal, and the Bonum Commune Award from St Augustine College, South Africa’s Catholic university.

He is currently a consultant to the KwaZulu-Natal Christian Council and chair of the Gandhi Development Trust.

The Bene Merenti medal was established 250 years ago as a military medal for papal army soldiers. For the past 100 years it has been awarded instead to priests and lay people whose service to the Church has been exemplary.

The medal is a gold Greek cross depicting Christ with his hand raised in blessing. On the left arm of the cross are the tiara and crossed keys, symbol of the papacy. On the right arm is the coat of arms of the current pope. The medal is suspended from a yellow and white ribbon, the colours of the papacy.

“I am very grateful to the parish pastoral council of Emmanuel cathedral and its administrator, Fr Nkosinathi Ngcobo, for nominating me to receive this award, and to Cardinal Napier for making all the necessary arrangements,” Mr Kearney said.