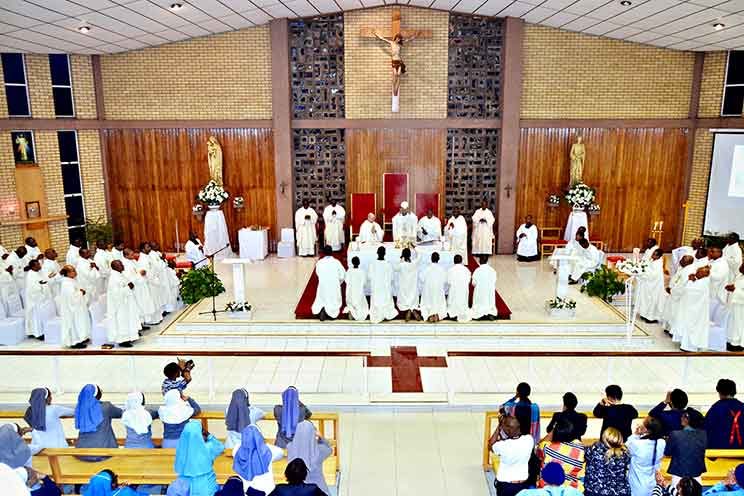 Archbishop Protase Rugambwa, secretary of the Congregation of the Evangelisation of Peoples, leads Mass in Gaborone’s Christ the King cathedral on a pastoral visit to Botswana and Namibia.

Archbishop Protase Rugambwa, secretary of the Congregation of the Evangelisation of Peoples, spent 12 days in Namibia and Botswana.

In Namibia, the Tanzania-born archbishop presided at the episcopal ordination of Bishop Willem Christiaans of Keetmanshoop.

In his homily, Archbishop Rugambwa reminded the new bishop that the effectiveness and fruitfulness of his ministry will always depend on his relationship with God, whom he represents.

They held a meeting with the college of consultors from the diocese, together with its apostolic administrator, Bishop Frank Nubuasah of Francistown.

The 51-year-old Gaborone diocese serves some 70000 Catholics. It has three permanent deacons, two transitional deacons, and about 400 volunteer catechists.

Moreover, there are also numerous funeral leaders and ministers of the Eucharist, vibrant and active sodalities, and strong youth involvement, which all play a crucial role in the local Church.

Archbishop Rugambwa described his visit as learning of the life and mission of the Church within missionary countries.

He said it offers the Congregation of Evangelisation the opportunity to acknowledge the achievements reached in mission territories, and also witness the challenges being faced there in terms of evangelisation.

Pastoral visits, Archbishop Rugambwa said, are also a sign of closeness and solidarity with the universal Church.

The archbishop held meetings with catechists, and also with religious superiors, of the diocese.

Speaking to catechists, he said the role of catechists and lay leaders remains an important force in the work of evangelisation.

Archbishop Rugambwa also made a courtesy visit to St Joseph’s College in Kgale where he met with Bishop Emeritus Boniface Tshosa Setlalekgosi, and then celebrated a public Mass at Christ the King cathedral.

He concluded his visit in Maun, in Francistown diocese.