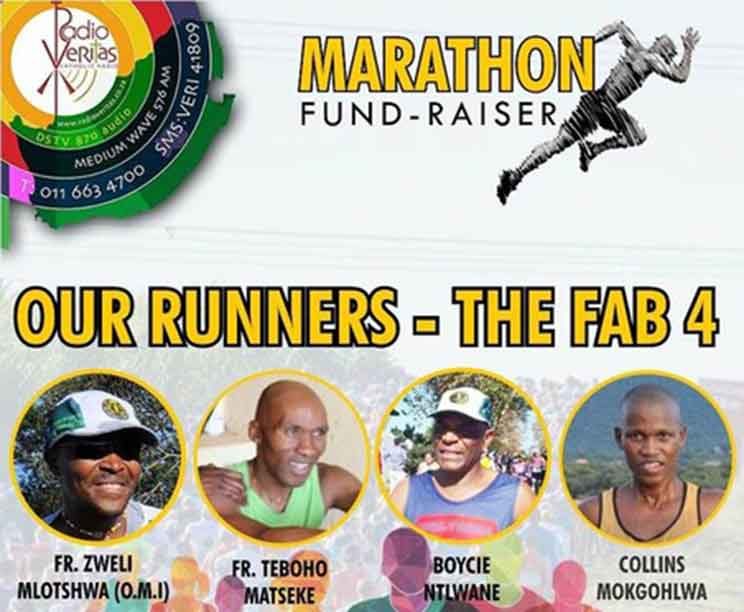 Two priests and two laymen will run the 2018 Comrades Marathon run to raise funds for Radio Veritas. The #runforradioveritas campaign will see them doing the 90km “down run” from Pietermaritzburg to Durban.

Fr Teboho Matseke, Oblate Father Zweli Mlotshwa, Boycie Ntlwane and Collins Mokgotlwa will be among 20000 runners from more than 60 countries who will take part in the race on June 10.

“The Fab 4”, as they have named themselves, will be carrying and flying the Catholic flag high at this year’s iconic international ultramarathon.

The spirit of the Comrades Marathon embodies the attributes of camaraderie, selflessness, dedication, perseverance, and ubuntu. This is the spirit these men are showing.

Mr Ntlwane discovered his talent for running by accident.

“I discovered I was good at running when I was in high school and we were all forced to run because they needed to select a school team. To my surprise, I was the first to finish, with a one-hour gap ahead of  all the other students,” he recalled.

Mr Mokgotlwa recalled that he never liked sport, especially athletics. But he was inspired by his sister, who enjoyed running. When he saw her doing it, he thought to himself, “I think I can do that.”

Fr Mlotshwa’s love for running started while he was studying at St Joseph’s Oblate Scholasticate in Cedara. And now he is addicted.

With Fr Matseke, they thought that as proud Catholics, this year they should be pounding the road in the name of Radio Veritas.

“Everyone should support this campaign for Radio Veritas, because they have created a community and that’s what we are called to do,” Fr Mlotshwa said.

“The radio station is doing a lot to promote the Catholic ethos, and putting the Church out there. Radio Veritas is important, and the money we raise will be put to good use.”

The runners are inviting individuals to sponsor them at R20 or more per kilometre of their run. All the proceeds will go to Radio Veritas.

To pledge, SMS the word “mara” to 41809. Further details will then be sent by return SMS.

For information on other ways of pledging, contact Mahadi Buthelezi on 011 663-4700.