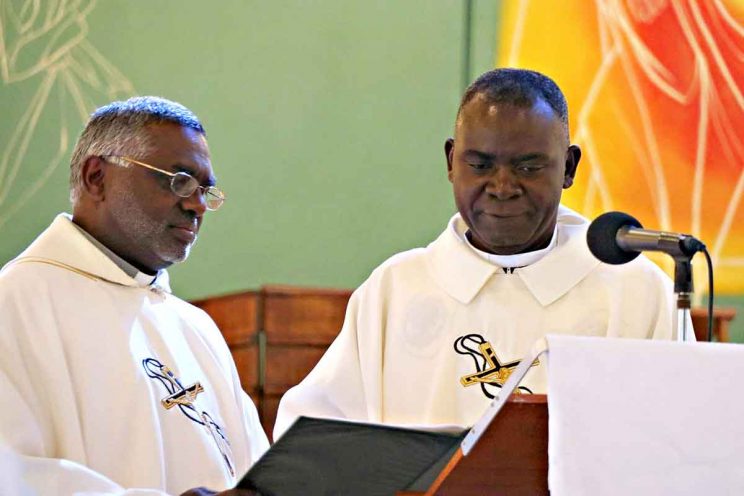 Fr Neil Frank (left), the first provincial of the three unified Oblate provinces, with Fr Guillaume Muthunda Hengelela, general councillor for the Africa-Madagascar Oblates, at the unification Mass in Johannesburg

There was great excitement at the unification Mass of the three former provinces of the Oblates of Mary Immaculate, including the mission into Zimbabwe, at St Charles’ church in Victory Park, Johannesburg.

Fr Neil Frank was officially installed as the provincial of the OMI Southern Africa at the Mass.

Archbishop Tlhagale is an Oblate himself.

Fr Frank, an Oblate for 25 years this year, made his first vows in 1993 and was ordained a priest in 1999. He worked in the missions in KwaZulu-Natal and served as president of St Joseph’s Theological Institute before being appointed provincial of the new province.

“The most meaningful aspect of the celebration for me personally was the great number of Oblates who attended, travelling from Cape Town, Kamieskroon, Kimberley, Bloemfontein, Durban, Pietermaritzburg, Potchefstroom, and Zimbabwe to Johannesburg,” Fr Frank told The Southern Cross.

“The effort my Oblate brothers made to participate in this historic event signified the support they have for the new structure and for the mission it is intended to serve. As the first provincial I felt blessed and encouraged by such support. There was much joy in being together.”

In a deep theological and symbolic gesture, the outgoing provincials of the three provinces that have united — Frs Vusumuzi Mazibuko, Ronald Cairns and Mokone Rathokoa — brought up three jugs of wine in procession and poured them into one jug held by Fr Frank who filled the chalices from this one jug.

The unification into one province is at the service of the Church for the salvation of souls.

A number of Oblate anniversaries were also celebrated. Among them were those of Fr John Patterson (75 years), Bishop Edward Risi (50 years), and Archbishop Tlhagale (50 years).

There were 22 jubilarians altogether, who for the first time celebrated in the new province.

“It meant a lot that my family, friends, and the Oblate Associates had celebrated with us. Many people have felt close to the Oblates and have rejoiced with us at the start of this new province,” said Fr Frank.

“There are many challenges ahead for us, but the Spirit gives us much confidence. Our general has asked us to be ‘bold and courageous’.

“It is important that we preserve our Oblate way of life and break out of the parish priest mould that we often get cast in,” he said.

“Community life is central, with Oblates living under the same roof and having a common life together. This witness is essential to our way of serving the Church,” said Fr Frank.