A Pilgrimage on the Trail of Abbot Pfanner 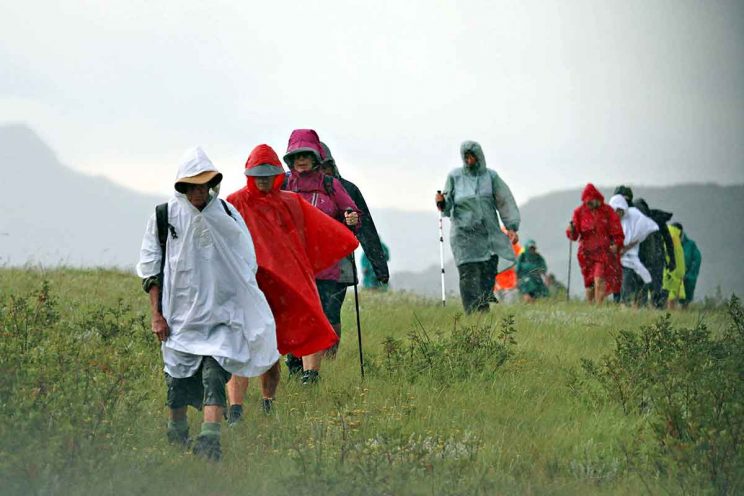 One needn’t go to Spain for a Camino: a local walking pilgrimage is available on the trail of Abbot Pfanner in KwaZulu-Natal. JUDITH SHIER describes her experience and that of her fellow pilgrims of the 12-day KZN Camino.

‘What happened?” a voice called out. “Why are you walking?”

These words floated out to us on a dull and drizzly day as our 16-strong group walked through a village on the way from Emaus mission to Umzimkulu in KwaZulu-Natal.

And strange we must have appeared to many people we encountered on the way, a mixed group of young and old, black and white, priest and laypeople, Catholic and non-Catholic — all pilgrims on the newly conceived, inaugural Abbot Pfanner Trappist Trail.

The trail is the brainchild and dream of Sylvia Nilsen, who with her co-director Jenny Rooks and several others, has been working tirelessly to establish a trail which is “more than just a hike” in our very own KZN.

Inspired by the Camino pilgrimage in Spain, this walk took us from Mariannhill monastery and back, (partly by bus) over 12 days, via eight Trappist mission stations. All of these missions were set up in the 19th century by the friar from Austria, Francis Pfanner, first abbot of Mariannhill.

Now the trail is also becoming publicly available for anyone up to its physical demands. In future there will be an option of eight or 12 days.

Set in beautifully undulating countryside, with views of the hills and valleys made famous by Alan Paton in his classic novel Cry the Beloved Country, the walk offers much on the physical and the spiritual level.

Some will be attracted by the opportunity to see the many mission stations — such as Reichenau, Centocow, Emaus and Lourdes, among others — which are all steeped in a rich history of Trappist ways, still evident in the beautiful buildings they made from materials they created and formed themselves. 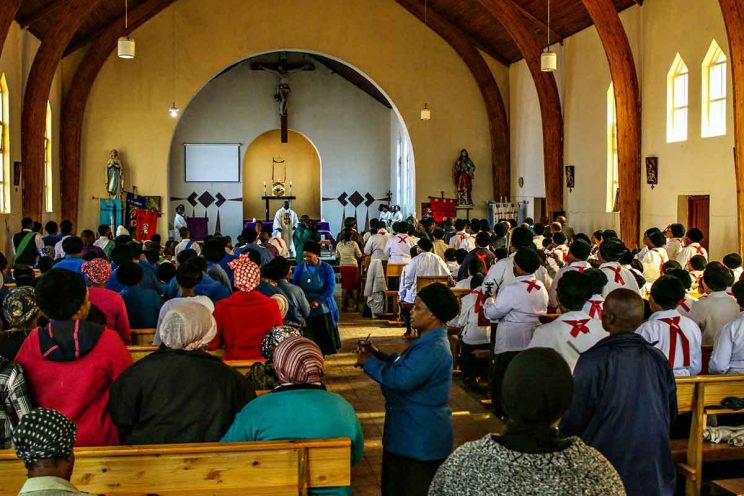 The pilgrims joined the community at Mass in Maria Hilf, one of the
Trappist missions established by Abbott Francis Pfanner. (Photo: pierre retief photography – PRPhoto.co.za)

Church ‘near to heaven’

Many of the churches are well-preserved and some, like the almost abandoned St Bernard’s on top of a remote hill—”near to heaven”, as filmmaker Siphiwe Mazibuko put it — need to be preserved.

Mr Mazibuko, a freelance cameraman and filmmaker who accompanied us all the way, felt that for churches like this, “someone has to do something”.

There is a gradual recognition that there lies in these hills and valleys a unique tourism focus, as Mr N Mkhize of Ubuhlebezwe municipality put it.

Mdu Zuma, a Catholic and local tour guide who was part of the pilgrim group, said: “I knew before that Abbot Francis was the one guy who started all the missions, but I didn’t have more information about him. For me to visit all these missions was great, especially the Emaus mission.”

He was interested to learn that Abbot Pfanner spent the last years of his life at Emaus, where he died in 1909. Mr Zuma enjoyed seeing how the abbot was living, “as well as the museum that is telling more of the story of Abbott Pfanner”.

Another highlight at Emaus was the 14 Stations of the Cross, going up the mountain.

Many in the group — Catholic or non-Catholic Christians, and even non-believers—may be looking for a spiritual side of a walk such as this, whether it be found in the Mass held in churches along the way, the opportunity for quiet prayer in the churches at mission stations, or in connecting with the environment.

As one pilgrim put it, out there on the never-ending hills and pointing to the landscape: “This is my church!”

Nombuso Kheswa, a freelance journalist who walked all the way, said: “I had something I cannot explain the day we were walking to St Bernard’s. I came to realise that this walk doesn’t specifically need Catholics; it needs everyone who is willing to know him or herself well and to understand the environment.” 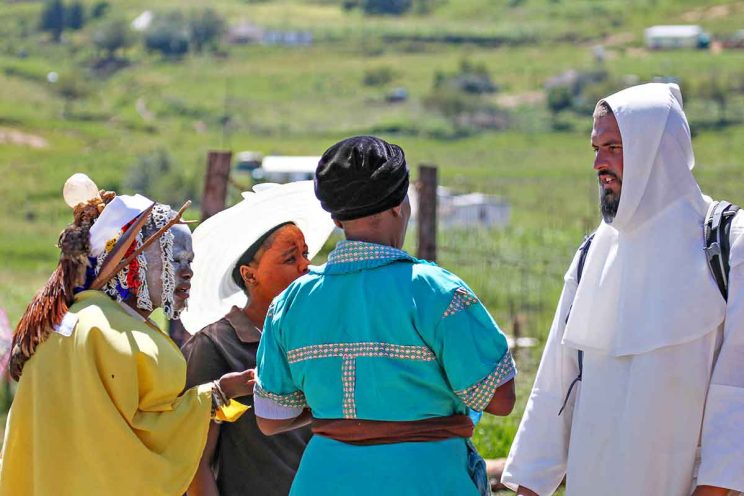 Fr Paul of Centocow talks with members of the community during pension day in one of the villages through which the pilgrims passed. (Photo: pierre retief photography – PRPhoto.co.za)

For one of the Catholics on the trail, it was a real eye-opener.  Sharon Miller knew it was going to be a religious walk but did not realise the impact it would have on her.

“As a Catholic, it’s been an absolute privilege because I have experienced some amazing sides to the Catholic Church that I didn’t even know existed”—the deep faith of the faithful she met along the way.

“The people out here are so devout. I’ve never seen Catholics so devout. I have travelled in Europe — European Catholics aren’t half as devout as the rural Africans, and it’s been absolutely incredible. I’ve been very, very moved.”

The group was accompanied by Fr Paul of Centocow mission for six days of the pilgrimage. (We are grateful to Fr Ignatius Stakiewicz, his superior, who was able to spare him for that time!).

Fr Paul was able to celebrate Mass on several occasions on the pilgrimage, recognising that the organisers “want something more than a tourist trip” and having been, in his native Poland, witness to the effect of celebrating Mass on the trail.

He also offered a daily blessing to all. One of the Catholic participants, experienced Camino walker Susie Wilkie, said that “having the experience of a priest walking with us, saying Mass on a verandah in a shed by the dam, and having a Mass in an abandoned church up on a hill with the local congregation singing, were all amazing experiences”.

“And to be able to celebrate Mass so often during this 12-day walk was very special on the religious side, as well the historical aspect of [the] missions.”

Ms Wilkie reported that she came to realise on the basis of the faith she saw in the local Catholics, that she had a lot of work to do with her own religious faith and spirituality.

We were received most hospitably by all the missions we visited, respectfully and with friendly greetings in villages we passed through, most of which were neat and clean.

Church services were going on in various buildings in these villages on Sunday, and some members of the St Bernard (Lourdes) community even climbed the faraway hill to join us in Mass, giving up their seats to us, and offering loud, joyful singing and percussion.

The isiZulu-speakers in our party explained to interested community members what the trail was all about. We never had any reason to feel unsafe on our pilgrimage.

Walking involved traversing hill and dale on farm land, tribal land, forestry roads and grassland, often 20km or more per day. Some paths are gravel roads, others rocky or narrow, through streams and dongas.

“I enjoyed the walking. I am a slow walker up the hills, so I found that a bit challenging,” said Sharon Miller. “But I managed. I asked for a little bit of guidance and divine intervention to give me some strength in my legs — and it helped!’

Trails offered by amaWalkers Camino are led by an experienced group leader and a local trail guide.  The size of the groups is limited to 12 people. Accommodation is in mission stations, or local guest farms. Meals are provided with pilgrims’ luggage transferred between accommodations.

The trail has been prepared with an enormous amount of planning, effort and organisation by the Abbot Pfanner Trappist Trail team. It is hoped that mountain bike trails will soon be available.  Churches, hiking clubs and other groups can offer their own trails.