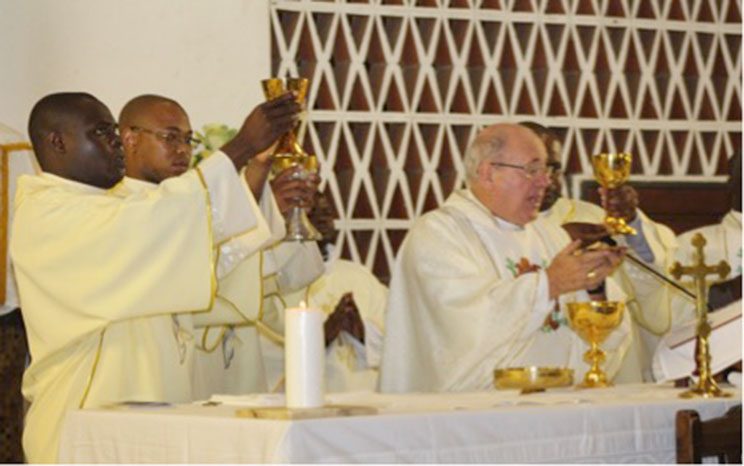 This year’s celebration of the feast day of the Stigmatines’ founder gave an extra reason for joy: the ordination of three new Stigmatine deacons.

Every year on the Stigmatines in the Most Holy Redeemer Province of Southern Africa, together with local clergy and people in the pastoral region, commemorate the death of founder St Gaspar Bertoni.

And this year Archbishop William Slattery of Pretoria ordained three men to the diaconate: Africa Mkhwanazi of Ladysmith, Tumelo Poo of Pretoria, and Anthony Otieno Osawo of Kenya.

The celebration was held at St John the Baptist parish in Pretoria North, under the shepherding of Fr Clement Senekane CSS, with about 30 priests and 10 deacons attending, from Pretoria archdiocese, Gaborone archdiocese in Botswana, and neighbouring dioceses.

During his homily, Archbishop Slattery, the celebrant of the day, said that it was a great joy to see young people who are willing to offer their lives to the service of God and his Church, the people of God. He thanked the three deacons for their choices.

Referring to Isaiah 61, the archbishop said that Jesus was sending them to proclaim his name and bring the Good News to the poor and the broken-hearted.

“During their mission, Jesus is giving them the greatest rule, ‘to remain in his love,’” he said.

Archbishop Slattery said the deacons should imitate Jesus during their diaconate work.

“You should learn from Jesus by being gentle and humble in your own hearts.

“You should remain in the love of Jesus Christ, know him, and have sympathy for the people of God entrusted to you, know their situations, and bring hope in their suffering.”

Referring to the life of Stigmatine founder St Gaspar Bertoni, who cared for those living on the streets of Verona, he said the deacons should imitate the saint, and take him as their role model, during their service.

“Being close to the disadvantaged is the gift of the Stigmatines, modelled on their founder,” the archbishop said.

“As deacons, you are also called to love and work with young people.”

Archbishop Slattery noted that there were about 160 000 young people coming into the city of Pretoria every year.

“Humility and gentleness are very important in carrying out your duties as deacons,” the archbishop reiterated.