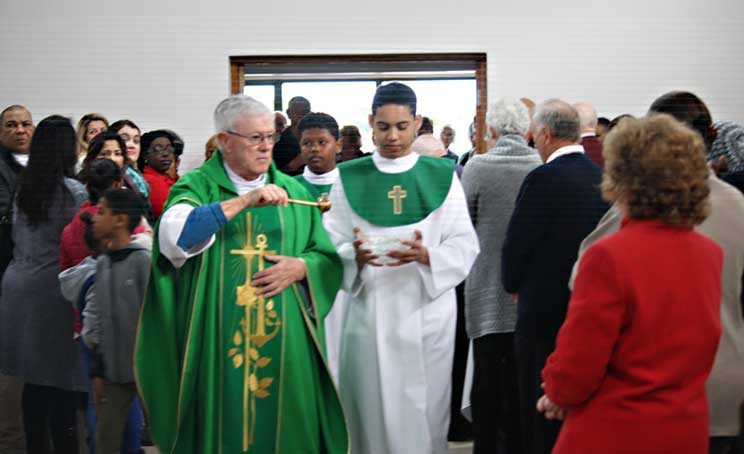 Fr Joseph Slattery blesses the new centre in Jeffreys Bay, named after the priest who inspired it.

By Frank Nunan – Fire and flood, these “elements seem determined to mark major events surrounding the late Fr Paul Fahy, making sure that we remember them vividly”, guests at the opening of a new community centre in Jeffreys Bay named after the priest were told.

Fire and Flood Wont Stop Us

Master of ceremonies and project manager Dennis Mauer recalled that the great fires of June 2017 had almost prevented the celebration of Fr Fahy’s golden jubilee, shortly before his death.

And the day before the opening and blessing of the new Paul Fahy Catechetical Community Centre at St Clare of Assisi church, a cloudburst dumped 75mm of rain on Jeffreys Bay, causing a flood which threatened the church and the new centre.

The new centre was blessed and officially opened by Fr Joe Slattery, Fr Fahy’s successor as priest-in-charge of the Kouga Catholic community. The Mass which was concelebrated with Capuchin Father Matt Gormley.

The opening was attended by Fr Fahy’s sister, Nora Flaherty, who unveiled the commemorative plaque, accompanied by family, all from Ireland.

After the blessing and Mass, more than 120 parishioners and guests attended a gala luncheon inside the new centre, which primarily consists of a hall and five classrooms.

In her tribute to Fr Fahy, chief fundraiser Diana Alberts recalled that he had always stressed that it was the function of this generation to plant the seeds of trees under which future generations of believers would find shade. This centre, she noted, is one such tree.

In her address, parish pastoral council chair Cecile Heather paid tribute to all those who had been instrumental in the successful completion of the project, especially Mr Maurer, Diana Alberts and architect Willem Mostert.

The new Catechetical Community Centre, or CCC as it is known in the parish, had its origins in the days when the present Church of St Clare of Assisi was itself a community hall which played host to many memorable parish events. Following its conversion into a church a need was felt for a new community centre.

The project was given impetus by the growing number of catechism-age children in the parish, who were being given instruction in various rooms and corners of the church.

After much deliberation, the project was launched in 2015, with Fr Fahy enthusiastically seeking funds for the project to add to the intensive fund-raising efforts within the parish driven by Ms Alberts. A plot adjoining the church in Jeffreys Bay belonging to the diocese was sold, and the funds made available for the project by Bishop Vincent Zungu of Port Elizabeth.

Grants were received from the Loyola Foundation in the United States and from the Pontifical Mission Society in Rome to enable the parish to complete the project.

Architect Mr Mostert drew up the plans, at no cost to the parish and shepherded them through official channels for approval.

Construction work for the first phase of the project was completed near the end of 2017, and the second phase is 98% complete.

Fr Fahy left the parish a financial bequest in his will, and these funds will be used for a fence to provide security for the St Clare of Assisi church complex.