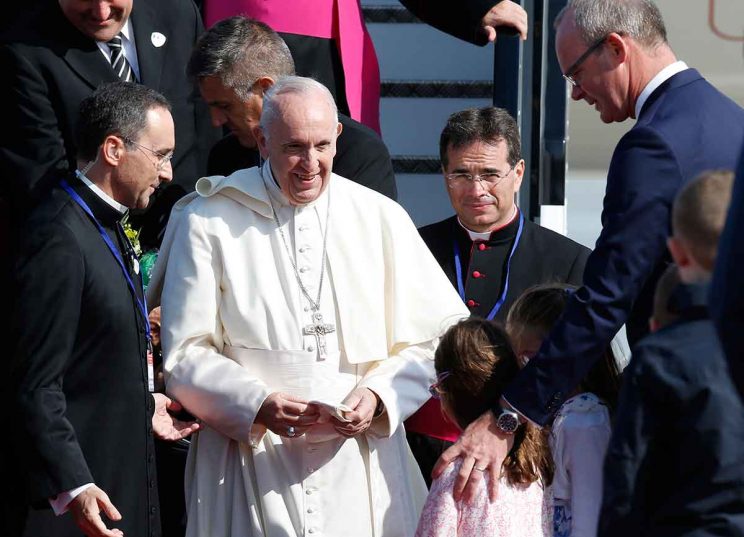 Pope Francis greets Simon Coveney, deputy prime minister of Ireland, accompanied by his children, as he arrives at the international airport in Dublin Aug. 25. The pope is attending the World Meeting of Families in Dublin and is scheduled to meet with survivors of clerical sexual abuse. (CNS photo/Paul Haring)

Acknowledging the failures “of bishops, religious superiors, priests and others” in the Catholic Church to protect children from the “repugnant crimes” of physical and sexual abuse, Pope Francis began his two-day visit to Ireland.

Meeting with civil, cultural and religious leaders in Dublin Castle , the pope said he knew that the horrendous history of abuse and its cover-up in Ireland “has rightly given rise to outrage and remains a source of pain and shame for the Catholic community.”

Departing from his prepared text, Pope Francis said his letter to the people of God  included “commitment, a greater commitment to eliminating this scourge from the church whatever the cost.”

With the welcoming ceremony held at the presidential residence rather than the airport, the mood as the pope descended the steps from his plane was subdued. Few people were on the road from the airport into the city. Close to Dublin Castle a group of teenagers held welcome signs, including one that said, “We love the pope. He gives us hope.”

Before heading to the castle, Pope Francis stopped at “Aras an Uachtarain,” the Irish president’s residence, where planted a tree, just as St. John Paul II had done in 1979. The late pope’s oak is now a mature, shade-providing tree. The Vatican press office said the pope and President Michael D. Higgins spent 15 minutes speaking privately.

Welcoming Pope Francis to Dublin Castle, Leo Varadkar, the 39-year-old prime minister or Taoiseach, acknowledged how much the Catholic Church had done over the centuries for the people of Ireland.

But he also spoke plainly of the way both the church and the Irish state failed its people, especially the most vulnerable.

“The failures of both church and state and wider society created a bitter and broken heritage for so many, leaving a legacy of pain and suffering,” Varadkar said. “It is a history of sorrow and shame.”

“In place of Christian charity, forgiveness and compassion, far too often there was judgment, severity and cruelty, in particular toward women and children and those on the margins,” he said, citing the Magdalene laundries, where women considered promiscuous were forced to work, illegal adoptions arranged for children of unwed mothers without their consent and the sexual abuse of children by clergy.

“Wounds are still open and there is much to be done to bring about justice and truth and healing for victims and survivors,” he said, before asking the pope to “use your office and influence to ensure this is done here in Ireland and across the world.”

The “heart-breaking stories from Pennsylvania of brutal crimes” against children detailed in the grand jury report in mid-August and the cover-up the report described “is a story all too tragically familiar here in Ireland,” the prime minister said.

“There can only be zero tolerance for those who abuse innocent children or who facilitate that abuse,” he said. “We must now ensure that from words flow actions. Above all, Holy Father, I ask to you to listen to the victims.”

Pope Francis, speaking after the prime minister, acknowledged how thousands were mistreated by priests and religious. “It is my hope that the gravity of the abuse scandals, which have cast light on the failings of many, will serve to emphasise the importance of the protection of minors and vulnerable adults on the part of society as a whole.”

The main purpose of the pope’s trip Aug. 25-26 was to join celebrations of the Vatican-sponsored World Meeting of Families. He told reporters traveling on the plane from Rome with him that he loves spending time with families. He also told them he was pleased “to return to Ireland after 38 years. I was there almost three months (in 1980) to practice my English.”

Ireland has seen major changes since then-Father Jorge Mario Bergoglio studied English there. In 1995, voters approved a referendum to legalize divorce; the Good Friday agreements bringing peace to Ireland and Northern Ireland were signed in 1998; gay marriage was approved in a 2015 referendum; and in May, 66 percent of Irish voters approved a referendum to legalize abortion. The legislation is expected to be signed in the fall.

Still, Pope Francis said, Catholics have and will continue to enrich the country with the values of their faith.

“Even in Ireland’s darkest hours,” he said, the people “found in that faith a source of the courage and commitment needed to forge a future of freedom and dignity, justice and solidarity.”

As Ireland grows more diverse, the pope said, he hoped the country would “not be forgetful of the powerful strains of the Christian message that have sustained it in the past and can continue to do so in the future.”

Thanking Ireland for hosting the World Meeting of Families, the pope said the Catholic Church wants “to support families in their efforts to respond faithfully and joyfully to their God-given vocation in society.”

“One need not be a prophet to perceive the difficulties faced by our families in today’s rapidly evolving society,” Pope Francis said, “or to be troubled by the effects that the breakdown in marriage and family life will necessarily entail for the future of our communities at every level.”

“Families are the glue of society,” he said. “Their welfare cannot be taken for granted, but must be promoted and protected by every appropriate means.”By Cindy Wooden Catholic News Service

Pope: Be Grateful to Your Parents, Never Insult Them