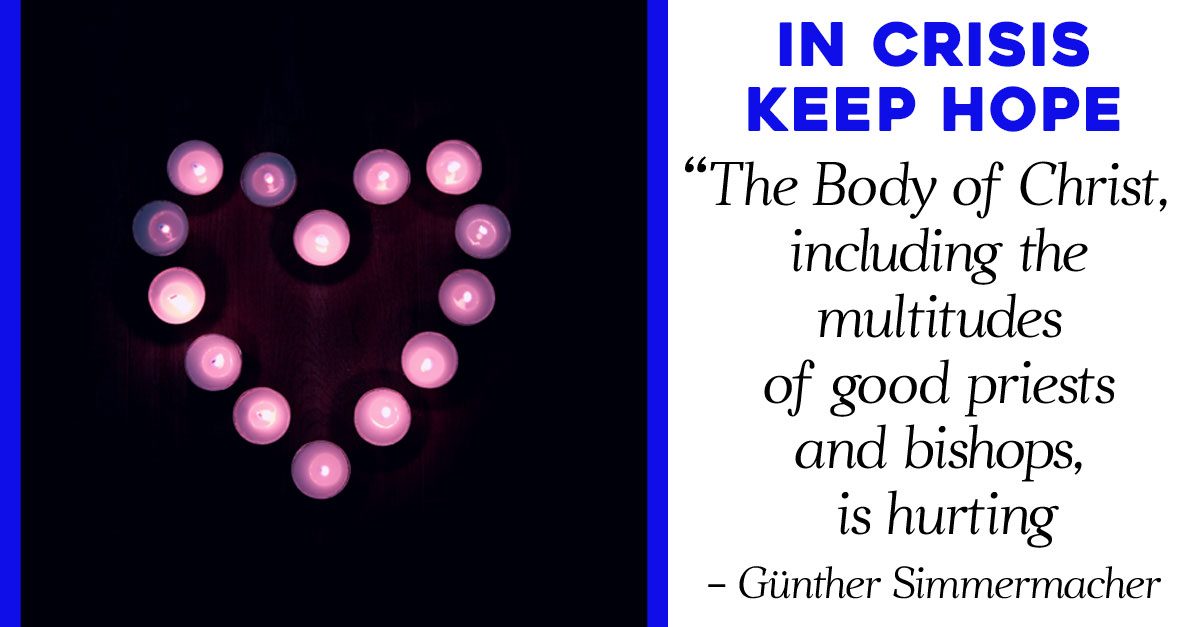 As Catholics are hit by wave after wave of old and new abuse scandals, many people are facing a crisis of faith: How can all this evil be reconciled with the Good News of the Gospel?

But we must not lose sight of Christ and his promise of salvation, for to do so is to yield to the devil’s work.

We are Catholics not because of the men who lead the Church but because we subscribe to the truths of the Creed.

While priests, bishops and popes are called to guide us to salvation and feed the faithful on their earthly pilgrimage — as most do in selfless and virtuous service — our faith resides not in men but in God.

There is one Lord, one faith, one baptism, and one Church founded by Christ. We believe in the Church as the perfect Bride of Christ, not the institution which has always been subject to human failure.

And regardless of human failings in the Church, Christ is still present in the Eucharist.

And regardless of human failings in the Church, Christ is still present in the Eucharist.

The Church is the source of salvation, instituted by Christ and built on Peter, who himself was an imperfect man. The Church is not an association, a political party or a club from which we can simply resign in disillusionment or protest when the leadership fails.

Indeed, we — the People of God — are the Church, and we are distressed and angry because in country after country those in leadership whom we were supposed to trust betrayed us. The Body of Christ, including the multitudes of good priests and bishops, is hurting.

The never-ending scandal over the cover-up of sexual abuse within the Church must impel the laity to demand new systems of oversight, and induce the clergy on all levels to accept with humility the necessity of not just greater lay involvement in running the Church but also greater lay leadership.

The Church needs a purge of the toxic clericalism which created the conditions in which abuses could take place without threat of consequences; the kind of clericalism in which the primary concern was not for the victims of abuse but for personal and institutional reputation. This is the kind of clericalism in which abusers could rise up the ranks, even up to that of cardinal, as long as they had the right patrons and passed the right ideological litmus tests.

This is the kind of clericalism in which abusers could rise up the ranks, even up to that of cardinal, as long as they had the right patrons and passed the right ideological litmus tests.

All those who perpetrated abuses and all those who enabled these abuses by covering them up — actively by moving predators around or passively by their acquiescence in a culture of silence — have betrayed not just the victims of these abuses, not just the faithful, not just all the good bishops and priests, not just the Holy Father, but also the very God whom they promised to serve.

Though they might not have intended it, these people have done the devil’s work by shrouding Christ in the smoke and dust of their destructive actions. And in doing so, they have created obstacles in the path of people’s salvation.

“Woe to the shepherds who destroy and scatter the sheep of my pasture! says the Lord,” (Jeremiah 21:1). May God have mercy on them. But it must also be acknowledged that much progress in diligence has been made in the past 15 years, with the Southern African Church often shining a light on the way globally.

But it must also be acknowledged that much progress in diligence has been made in the past 15 years, with the Southern African Church often shining a light on the way globally.

The Church is not terminally corrupted, so we must not lose hope, nor must we abandon the Holy Spirit whose guidance we must seek in rebuilding the Church. There is no arguing that our Church needs to be cleansed, morally and institutionally.

There is no arguing that our Church needs to be cleansed, morally and institutionally.

The old models of running the Church and the relevant codes of Canon Law must be thoroughly reformed to accomplish this, with some areas of authority — including and especially the investigation into abuse cases and their handling — invested entirely in lay people.

Even among many bishops there is a recognition that this would be a necessary reform as the Church is trying to rebuild its shattered credibility and reputation.

We must keep hope and always pray for the Church.