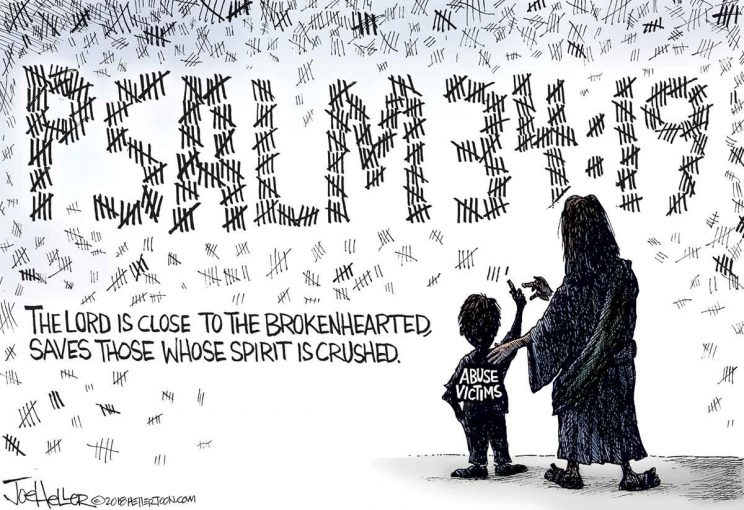 Joe Heller depicts the more than 1,000 people who say they were abused by some 301 priests in Pennsylvania, many whom are now dead. The state’s attorney released a grand jury report Aug. 14 on a months-long investigation into abuse claims spanning a 70-year period in six Pennsylvania dioceses.

“No effort must be spared” to prevent future cases of clerical sexual abuse and “to prevent the possibility of their being covered up,” Pope Francis said in a letter addressed “to the people of God.”

“I acknowledge once more the suffering endured by many minors due to sexual abuse, the abuse of power and the abuse of conscience perpetrated by a significant number of clerics and consecrated persons,” the pope wrote in the letter dated and released.

The letter was published less than a week after the release of a Pennsylvania grand jury report on decades of clerical sexual abuse and cover-ups in six dioceses. The report spoke of credible allegations against 301 priests in cases involving more than 1,000 children.

“The heart-wrenching pain of these victims, which cries out to heaven, was long ignored, kept quiet or silenced,” Pope Francis said. “But their outcry was more powerful than all the measures meant to silence them.”

“The pain of the victims and their families is also our pain,” he said, “and so it is urgent that we once more reaffirm our commitment to ensure the protection of minors and of vulnerable adults.”

In his letter, Pope Francis insisted all Catholics must be involved in the effort to accompany victims, to strengthen safeguarding measures and to end a culture where abuse is covered up.

While the letter called all Catholics to prayer and fasting, it does not change any current policies or offer specific new norms.

It did, however, insist that “clericalism” has been a key part of the problem and said the involvement of the laity will be crucial to addressing the crime and scandal.

Change, he said, will require “the active participation of all the members of God’s people.”

“Many communities where sexual abuse and the abuse of power and conscience have occurred,” he said, are groups where there has been an effort to “reduce the people of God to small elites.”

“Clericalism, whether fostered by priests themselves or by lay persons, leads to a split in the ecclesial body that supports and helps to perpetuate many of the evils that we are condemning today,” Pope Francis said. “To say ‘no’ to abuse is to say an emphatic ‘no’ to all forms of clericalism.”

In his letter, Pope Francis acknowledged the church’s failure.

“With shame and repentance, we acknowledge as an ecclesial community that we were not where we should have been, that we did not act in a timely manner, realising the magnitude and the gravity of the damage done to so many lives,” he wrote.

“We showed no care for the little ones,” Pope Francis said. “We abandoned them.”

“Looking back to the past, no effort to beg pardon and to seek to repair the harm done will ever be sufficient,” he said. “Looking ahead to the future, no effort must be spared to create a culture able to prevent such situations from happening, but also to prevent the possibility of their being covered up and perpetuated.”

Recognising the safeguarding policies that have been adopted in various parts of the world as well as pledges of “zero tolerance” for abusive clerics, Pope Francis also acknowledged that “we have delayed in applying these actions and sanctions that are so necessary, yet I am confident that they will help to guarantee a greater culture of care in the present and future.”

All Catholics Should Ask for Forgiveness

As members of the church, he said, all Catholics should “beg forgiveness for our own sins and the sins of others.”

Pope Francis also asked Catholics to pray and to fast so that they would be able to hear “the hushed pain” of abuse survivors.

He called for “a fasting that can make us hunger and thirst for justice and impel us to walk in the truth, supporting all the judicial measures that may be necessary. A fasting that shakes us up and leads us to be committed in truth and charity with all men and women of good will, and with society in general, to combating all forms of the abuse of power, sexual abuse and the abuse of conscience.”

In Washington, the president of the US Conference of Catholic Bishops said by opening his letter with these words of St. Paul, “If one part suffers, all parts suffer with it’,” Pope Francis “shows that he is writing to all of us as a pastor, a pastor who knows how deeply sin destroys lives.”

In a statement issued Cardinal Daniel N. DiNardo of Galveston-Houston responded in particular to these words from the pope: “Penance and prayer will help us to open our eyes and our hearts to other people’s sufferings and to overcome the thirst for power and possessions that are so often the root of those evils.”

“These words must provoke action – especially by the bishops,” Cardinal DiNardo said. “We bishops need to – and we must – practice with all humility such prayer and penance.”

The pope is inviting “all the faithful” to “join in prayer and fasting as a way to help foster conversion and genuine change of life wherever it is needed, even in the shepherds of the church. Cardinal DiNardo said he too, extends that invitation to all Catholics.

Jesus’ own words about the power of prayer and fasting, the cardinal said, is “a humble reminder that such acts of faith can move mountains and can even bring about true healing and conversion.”

“On behalf of my brother bishops, I offer that only by confronting our own failure in the face of crimes against those we are charged to protect can the church resurrect a culture of life where the culture of death has prevailed,” he added. By Cindy Wooden Catholic News Service

Vatican: Days of Covering up Abuse Allegations are Over
Share