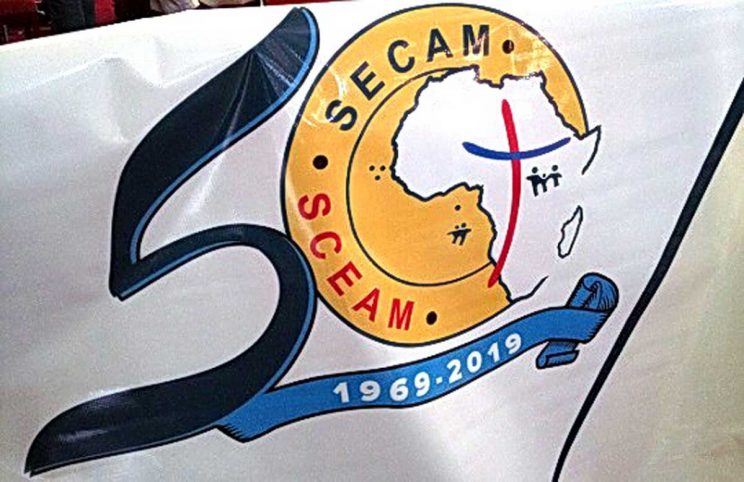 The SECM jubilee logo, as seen on the banner (Photo: CANAA)

A South African bishop, in his homily at the Mass to launch the golden jubilee year of the African Association of bishops’ conferences, said that “the smallest cooperation with Jesus and willingness to give the very little one has — be it money, time, a smile, attention, or a hug — can produce a miracle, even in our time”.

The Mass in Kampala, Uganda, marked the start of a year of celebrations of the 50th anniversary of the founding of SECAM, the Symposium of Episcopal Conferences of Africa and Madagascar.

The Miracle of the Multitudes

Bishop Sithembele Sipuka of Mthatha,  incoming president of the Southern African Catholic Bishops’ Conference and second vice-president of SECAM, reminded the congregation, and his fellow bishops, of the miracle of the feeding of the multitudes.

When Jesus and his disciples were faced with a large and hungry crowd, and no food for them, Bishop Sipuka said, there seemed no solution.

“When Andrew says, tentatively, ‘Here is a small boy present with five barley loaves and two fish,’ he adds with a sense of pessimism, ‘What is that between so many?’” the bishop said.

“But what does Jesus do? He takes the five loaves from the boy, gives thanks over them, and lets the disciples distribute them.

“The result is well known: over 5000 men, not counting women and children, were fed, and there were 12 baskets of leftovers.

“One generous person became the solution, giving Jesus the opening he needed to rescue the situation,” Bishop Sipuka said.

“We face challenges in Africa which can be overwhelming, but we are encouraged not to despair but generously do the little we can, and let God, as Jesus did with the few loaves of bread, do the rest,” he said.

Bishop Sipuka noted that in this jubilee year, we are invited to all bring forward our five barley loaves and allow the Lord, together with our cooperation as African bishops, to enact the programmes we think will take the Church in Africa forward.

“This is not to say that we will not need the assistance of our partners and the larger Church anymore,” he said.

“What it means is that when we bring our five barley loaves, the word ‘partner’ will begin to have its true meaning — because now it is said out of courtesy to avoid offence; but in truth, we are not partners, we are beggars, because we do not all bring our barley loaves to the party.

“Let us bring our few barley loaves and gain our dignity.”

Bishop Sipuka also warned of growing materialism in Africa. “Sadly, this crude materialism is even manifesting itself among pastoral agents, those at the forefront of missionary work.”

He said he observed an apparent loss of traditional African values.

“Being a community of love, self-sacrifice, finding joy in serving others and having God as enough for us are gradually being replaced by individualism, self-seeking, love of money, power and comfort.

“The source of our joy is gradually shifting from the Gospel,” the bishop said. “Perhaps that is why corruption and the hunger for power, with the consequent poverty of the majority, have become a major characteristic of Africa.”

SECAM was born of the wish of African bishops during and following the Second Vatican Council to establish a forum in which they could speak with one voice on the Church in Africa.

In July 1969 in Kampala, during a visit by Pope Paul VI, SECAM was formally launched.

The jubilee year, scheduled to run until July 28, 2019, has as its theme “Church Family of God in Africa, Celebrate your Jubilee! Proclaim Jesus Christ your Saviour!”