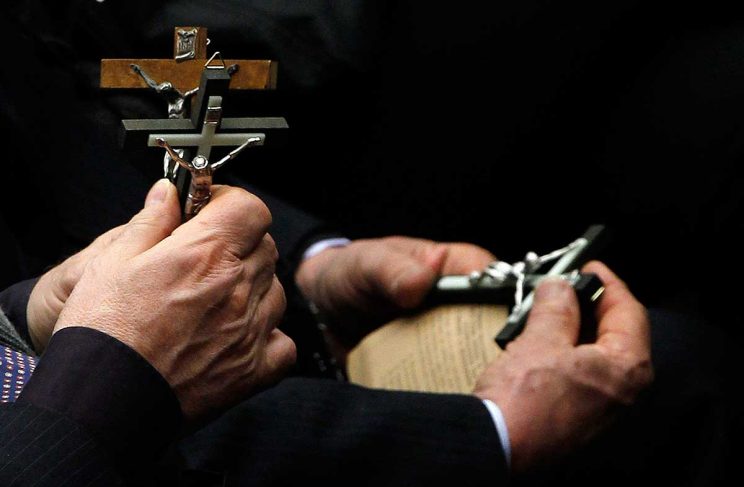 Recently I was told, as many parish priests are, that the person who disagreed with a decision I made was a “very good Catholic”, and that my decision challenged their ability to be Catholic.

I look back a generation or two. I remember my grandparents and their generation. Of my four grandparents, three were Catholic, one a Christian Scientist. And of the three, one would have called himself an honest Catholic.

My grandmothers were “good” Catholics. In their generation, that meant that they had their children baptised, put them on buses to the nearest Catholic school — which often meant making great sacrifice — and it also meant decades of curry-and-rice suppers and Catholic Women’s League tea (you know the kind that strips the enamel off your teeth and could be used by Elon Musk as a fuel source).

Being Good Catholics also meant that prayer was a part of family, and family part of Church.

Those formative years in Rivonia, Johannesburg — both at the Carmelite Convent and the parish — were often deep symbols of the community we seek to emulate.

Theirs was a generation… My grandparents practised their faith. It was a lived and integral experience for them.

Which brings me to my question again. What is a “Good Catholic”? As a parish priest, I’m hesitant to speak of the “Good Catholics”. In my experience that’s a double-edged sword — and it’s very sharp.

Good Catholic might mean that you are practising your faith, living it out in life, a parish community, family, prayer and with a radical honesty like both my grandfathers who were honest Catholics — even the lapsed Christian Scientist.

“Good Catholic” can also mean that you’re very good at being a “buffet Catholic”. You’ve been given the plate in baptism and you’ve never got past the first offering. Or you have piled your plate and thrown most of the food away.

I’m not a fan of buffet offerings. Too much of too much. And when I get to the table, all the good stuff has been taken and all I’m left with is the broccoli.

This type of “Good Catholic” loves the appellation “Catholic,” not by participation but as a space to negatively define their relationship.

Better to be an Honest Catholic

You see, I think that to be a “good” Catholic, one needs to be an “honest” Catholic. Being honest means that I am able to say that in the world I live in, the Church doesn’t often smell like my life. But I draw the Church, sometimes kicking and screaming, into the reality that I live in.

But I am also able to respect that the Church isn’t drawn down to my level to stay there. The Church (however you conceive that idea) must be in my culture to refine and purify it.

As Church we have to admit that wallowing is not where the Church should be. She (we?) have to make our efforts to make sure that in the life of the drug addict, we don’t become addicts too. We don’t see the adulterer and throw our lot in with him…

This is the most difficult part of being a Catholic. I am part of a faith-practice that was chosen for me by my parents at baptism, chosen for myself in confirmation, and lived out by my life choices. I choose to live my life orientated by faith to focus on the life of Jesus and what that has meant for the last 2000 years of humanity.

So, what does this mean? Well, stop trying to be a “Good Catholic”. Join me in trying to be an honest Catholic, an incomplete Catholic. A misguided and curious and struggling Catholic. I am this type of Catholic, alongside many others.

When we are honest Catholics, our parishes then are gatherings of sheep that smell so different, but somehow begin to smell like each other — because we admit that we all smell.