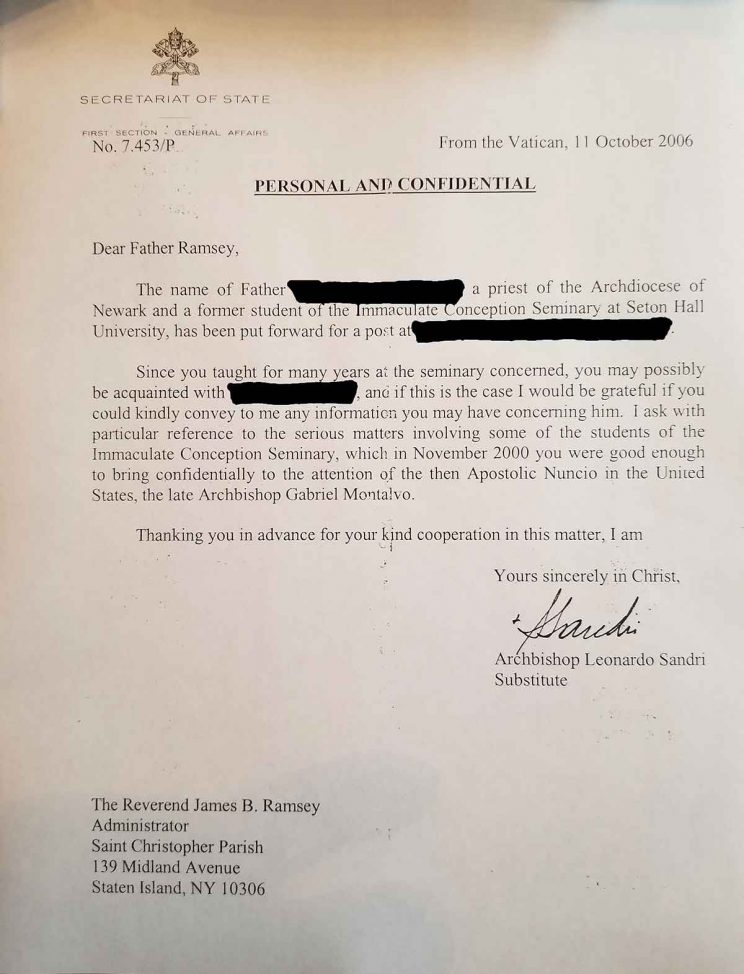 A top official from the Vatican Secretariat of State acknowledged allegations made by a New York priest in 2000 concerning Archbishop Theodore E. McCarrick, according to a letter obtained by Catholic News Service.

Father Boniface Ramsey, pastor of St. Joseph’s Church Yorkville in New York City, told CNS Sept. 7 that he received the letter dated Oct. 11, 2006, from then-Archbishop Leonardo Sandri, the former Vatican substitute for general affairs, asking for information regarding a priest of the Archdiocese of Newark who studied at Immaculate Conception Seminary and was being vetted for a post at a Vatican office. He made the letter available to CNS.

Then-Archbishop Sandri wrote to Father Ramsey, “I ask with particular reference to the serious matters involving some of the students of the Immaculate Conception Seminary, which in November 2000 you were good enough to bring confidentially to the attention of the then Apostolic Nuncio in the United States, the late Archbishop Gabriel Montalvo.”

Father Ramsey had been on the faculty of the seminary from 1986 to 1996 and had sent a letter in 2000 to Archbishop Montalvo informing him of complaints he heard from seminarians studying at the seminary, located in South Orange, New Jersey.

Father Ramsey said he assumed the reason the letter from then-Archbishop Sandri, who is now a cardinal and prefect of the Congregation for Eastern Churches, only mentioned “serious matters involving ” seminarians and not Archbishop McCarrick’s behaviour was because accusations against the former cardinal were “too sensitive.”

“My letter November 22, 2000, was about McCarrick and it wasn’t accusing seminarians of anything; it was accusing McCarrick.”

While Father Ramsey has said he never received a formal response to the letter he sent in 2000, he told CNS he was certain the letter had been received because of the note he got from then-Archbishop Sandri in 2006 acknowledging the allegations he had raised in 2000.

The 2006 letter not only confirms past remarks made by Father Ramsey, but also elements of a document written by Archbishop Carlo Maria Vigano, who served as nuncio to the United States from 2011 to 2016.

In an 11-page statement, published Aug. 26, Archbishop Vigano accused church officials, including Pope Francis, of failing to act on accusations of sexual abuse, as well as abuse of conscience and power by now-Archbishop McCarrick.

In late June, then-Cardinal McCarrick, the 88-year-old retired archbishop of Washington, said he would no longer exercise any public ministry “in obedience” to the Vatican after an allegation he abused a teenager 47 years ago in the Archdiocese of New York was found credible. The then-cardinal has said he is innocent.

Since then, several former seminarians have claimed that the then-cardinal would invite groups of them to a beach house and insist individual members of the group share a bed with him. By Robert Duncan and Junno Arocho Esteves Catholic News Service

When Will it End? Sexual Abuse is Always Intolerable

Homily for a Church That Has Sinned

Healing the Church Starts with Making Reparations for Sins