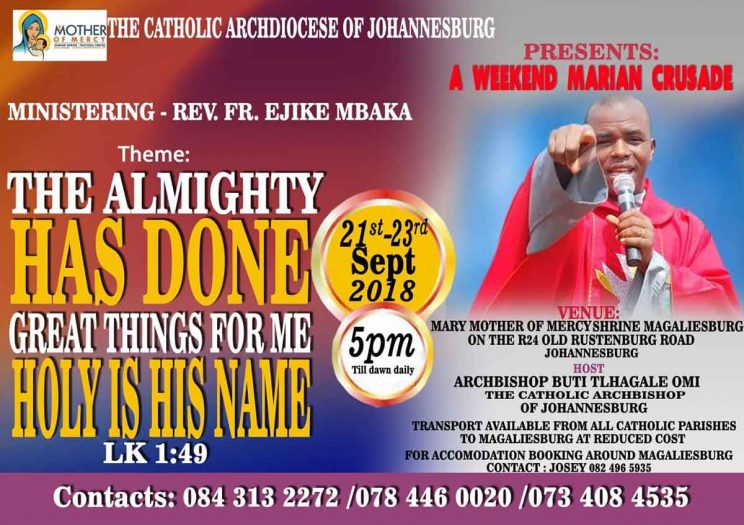 St James’ parish in Magaliesburg, Johannesburg archdiocese, is busy completing the building of a shrine and pastoral centre dedicated to Our Lady, and Nigerian priest Fr Ejike Mbaka will be visiting this month.

Fr Mbaka, renowned for his powerful sermons, will focus on Mary in his talk, “The Almighty has Done Great Things for Me, Holy is his Name”.

Archbishop Buti Tlhagale will host the September 21-23 event. He has named the Magaliesburg shrine Mother of Mercy, declaring it “a lasting memorial in honour of the Year of Mercy’’.

It will be overseen by St James’ parish priest Fr Charles Uloko, who is also the rector of the shrine, and Fr Bafana Hlatshwayo.

Fr Uloko said that notwithstanding ongoing construction, the temporary shrine and pastoral centre were already being used for day and weekend pilgrimages, with Mass, Eucharistic adoration, confession, public prayers to Mary, and mercy walks or Stations of the Cross in the nearby mountains.

Archbishop Tlhagale was the driving force behind the project, Fr Uluko said.

“The archbishop was particularly inspired by his trip to Brazil for World Youth Day, and while there visited the national Marian shrine at Aparecida, run by the Redemptorists,” he said.

On his return to South Africa, Archbishop Tlhagale invited the local Redemptorists to help in establishing a Marian shrine.

“Though it took a while to locate the perfect grounds for the shrine, in 2016 the archdiocese bought an old Jewish property called Camp David, previously used for youth camps,” said Fr Uloko. “The area was specifically chosen for its serenity and closeness to nature.’’

The near-completion of the shrine and pastoral centre are the first phase of the building project, he said, “with other phases such as a permanent chapel, Rosary gardens, and Stations of the Cross as funds are raised’’.