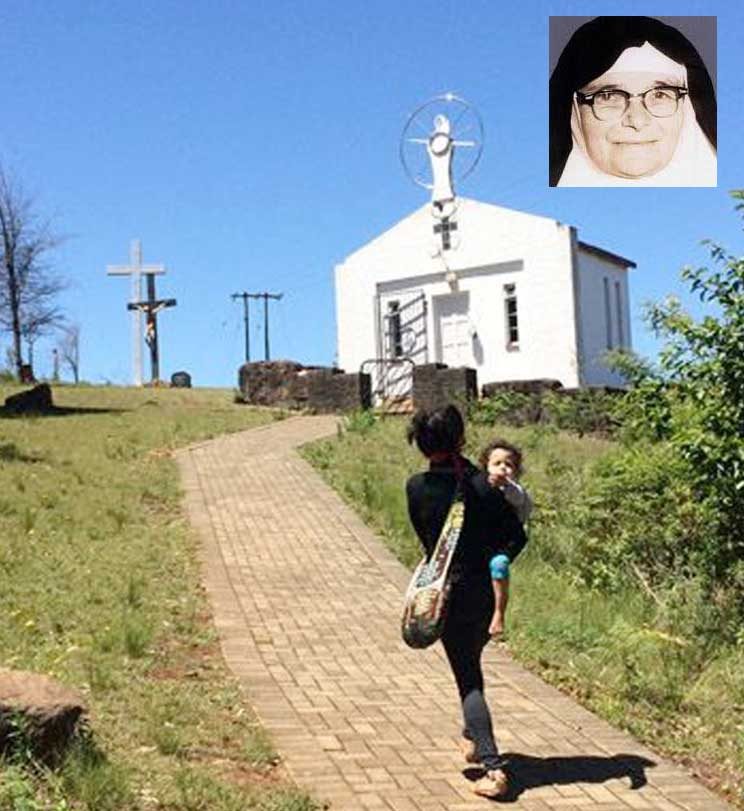 The sainthood cause for Sr Reinolda May, the visionary of Ngome,has taken its first steps. ERIN CARELSE looks at the life of the Benedictine nun, how the devotion grew, and the way forward for her cause.

When the experts review the life of the Benedictine nun whose visions of the Virgin Mary in rural KwaZulu-Natal gave rise to the devotions at Ngome, they will encounter a hugely popular and holy woman—who helped bring a king into the world.

Sr Reinolda May reported ten Marian apparitions between 1955 and 1971. The process of her cause for beatification was unanimously approved in August by the Southern African Catholic Bishops’ Conference, the first step on the way to canonised sainthood.

Sr Reinolda was born Franziska May on October 21, 1901, in Pfahlheim, near Stuttgart in south-western Germany. She was the youngest of nine children of a deeply religious family.

Her parish priest, Fr Eugen Adis, was a strong promoter of vocations, and Franziska, who belonged to the sodality of Our Lady, was open to hearing God’s call.

So it was no surprise when in 1922 she entered the convent of the Missionary Benedictine Sisters at Tutzing. Three years later she made her final profession, taking the name Reinolda, received her missionary cross and was posted to South Africa. She pronounced her final vows in Nongoma, KwaZulu-Natal, in 1928.

For the next ten years she worked as a seamstress at the mission stations of Entabeni and Mbongolwane, where she also taught catechism to locals.

She displayed an unflagging devotion to the Eucharist and Mother Mary.

While she was doing all that, Sr Reinolda became the first religious Sister in South Africa to take a course in midwifery, in part thanks to Bishop Thomas Spreiter of Eshowe, who allowed the Benedictine Sisters of Tutzing to assist women in childbirth.

She received a diploma as a midwife from Greys Hospital in Pietermaritzburg in May 1938. The following month, the Benedictine Mission Hospital opened in Nongoma and Sr Reinolda was put in charge of the maternity department.

During this time she made great efforts to learn the isiZulu language, devoting her life to serving the Zulu community, whose hearts she won through kindness and readiness to help.

The trust she earned from the mostly poor and traditionalist community is also measurable by the 28000 children born under her 38 years of tutelage and management at the Benedictine Mission Hospital’s maternity division.

One of those 28000 children was the future Zulu King, Goodwill Zwelithini, in 1948. The king reportedly often came to her small office to seek advice

She remained head of the department until her retirement in June 1976. The government took over the hospital in the same year.

Sr Reinolda helped the poor, and her friendly demeanour guided many non-practising Catholics back to the Church.

She kept meticulous records of every child who received emergency baptism at her maternity ward, and encouraged parents to enrol baptised children in Catholic schools.

She was a very popular figure in the local communities, with the people nicknaming her “Mashiyane”, on account of her bushy eyebrows.

While working at Nongoma, Sr Reinolda reported ten apparitions of the Virgin Mary, presenting herself as a “living monstrance”, between August 1955 and May 1971. She said the Blessed Virgin asked to be called the “Tabernacle of the Most-High”.

During the fourth encounter, in 1956, the Virgin Mary told Sr Reinolda that she wished for a shrine to be built for her “in the place where seven springs come together”, pointing into the direction of an empty area.

That area turned out to be Ngome, where — unbeknown to Sr Reinolda — there were indeed springs when she finally identified the place two years later.

Ngome, 46km from Nongoma, at that time was a small cattle farm which the Benedictines had bought in 1944.

Bishop Aurelius Bilgeri treated the apparitions and the devotions they inspired with extreme caution, allowing only a small chapel to be built in Ngome, near the seven springs, in 1966. He never encouraged devotion to the apparitions.

Bishop Biyase was more open to the devotions to Our Lady of Ngome than his predecessor, and allowed the construction of a bigger chapel in 1984.

Finally, in October 1992, Bishop Biyase declared Ngome a “Place of Prayer” but it has had visits from devout pilgrims since 1961.

Birth of a cause

The first step in the cause for Sr Reinolda’s sainthood was taken in January 2014 at St Joseph’s parish in Ngome, in the Inkamana deanery of the diocese of Eshowe, when it requested that the local ordinary, Bishop Xolelo Thaddeus Kumalo, consider her popularly known sanctity and heroic virtues, for motivation to the quest of her sainthood.

A month later, Bishop Kumalo formalised the request by writing to the Roman curia’s Congregation for the Causes of Saints on behalf of the diocese of Eshowe. A response was received in October 2014 from the prefect of the congregation, Cardinal Angelo Amato, granting a nihil obstat. This means that there are no obstacles hindering the initiation of the sainthood cause. Through this letter, Sr Reinolda received the official title “Servant of God”.

Bishop Kumalo accepted responsibility as petitioner of the cause, and assumed its moral and financial obligations. In February 2017 he appointed Fr Bonginkosi Dennis Xulu as postulator. This means that Fr Xulu from then on manages the investigations for the cause.

Once the investigations are completed and the reports compiled, Bishop Kumalo will pronounce the official opening of the cause.

He stressed that while this is a technical process, it is also a highly spiritual one which requires constant prayer and reflection. The bishop encouraged all Catholics to maintain a state of prayerfulness for the country, and the success of the cause of beatification.

Sr Reinolda encountered difficulties in gaining acceptance of her visions and the messages she received in them. She endured many humiliations.

Today around 50000 pilgrims come annually to pray at the shrine and to visit the grave of Sr Reinolda at the Benedictine Inkamana Monastery.

Most of those pilgrims have found Ngome to be a place of peace, reconciliation with God, and recovery of faith.