The Church in Ireland is Still Present 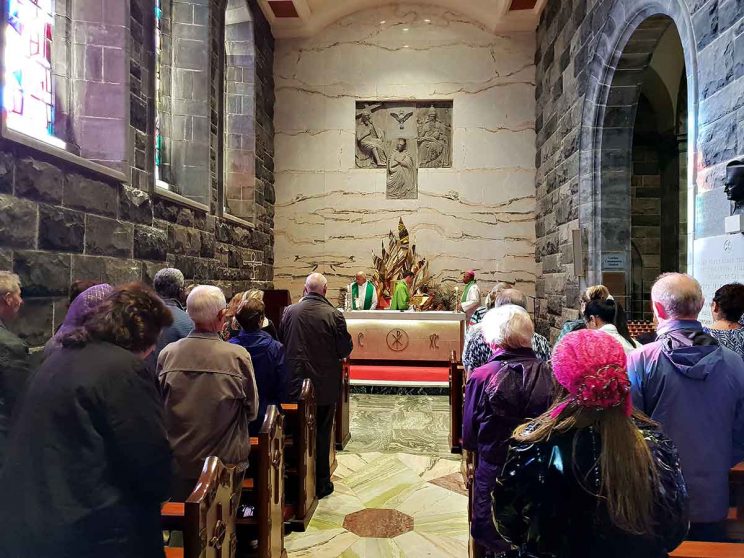 The scene: a pub in Dublin’s Nassau Street, near Holy Trinity College and Grafton Street, on a Saturday afternoon.

The Southern Cross pilgrims to Ireland, led by Bishop Victor Phalana, had a couple of hours of free time after seeing the Book of Kells. For my part, it was a good time to research Dublin’s beer culture.

As I ordered a stout from the hip young barman, I noticed that three of the pub’s four television screens were tuned to a live transmission of Pope Francis’ meeting with couples in the pro-cathedral (where our group had had its inaugural pilgrimage Mass six days earlier).

The other screen showed the Arsenal vs West Ham match, but the sound was set to the pope. It seemed the normal thing to do.

I found that remarkable: having a beer in a modern pub, watching the pope live on TV. It seems that the Church in Ireland has not disappeared. People might have left the Church and the practice of the faith in droves, and even be ill-disposed towards it, but the Church still has a presence in public life.

Of course, the first papal visit in almost 40 years concentrated minds. Although Pope Francis came for the World Meeting of Families, the whole trip was overshadowed by the sex abuse scandal.

TV programmes and newspaper column inches were dominated by the scandal. Often the rhetoric went beyond critique to assume anti-Catholic characteristics.

There was a lot of anger, and a lot of expectation that the pope would say or do something which might bring satisfaction. But it seemed clear that no words and no symbolic acts can ever accomplish that.

If we had arrived in Ireland with ideas of seeing soutaned parish priests and bewimpled nuns roaming the streets, we were soon disabused of such romantic notions.

Earlier we had visited the Benedictine Glenstal Abbey near Limerick, housed in a previously private mansion. Part of our rewarding visit was a presentation and very frank conversation with one of the monks there, Br Colmán Ó Clabaigh.

Br Colmán filled us in on the discouraging figures of vocations to the priesthood and religious life. The seminaries and novitiates are empty — and the average age of active priests is nearing 70. At the current rate, Ireland will have only 114 active priests by 2030.

Where once there was such a surplus of vocations that Ireland could export missionaries to evangelise the world, including our Southern African region, ordinations are so rare now that when one occurs, it invariably makes front-page news in the venerable national Catholic weekly, The Irish Catholic.

The figures of practising Catholics is diminishing sharply, too. In the last census, the number of Ireland’s inhabitants who identified as Catholics dropped to 72%. In the 1960s, it was 94%.

Br Colmán pointed out that the figure of Irish Catholics who attend Mass every week stands at 38%. That’s a quite good number in the European context but an alarming decline in Ireland, where in 1989 the number of weekly Mass-goers was 87%, and in 2006 still 56%. 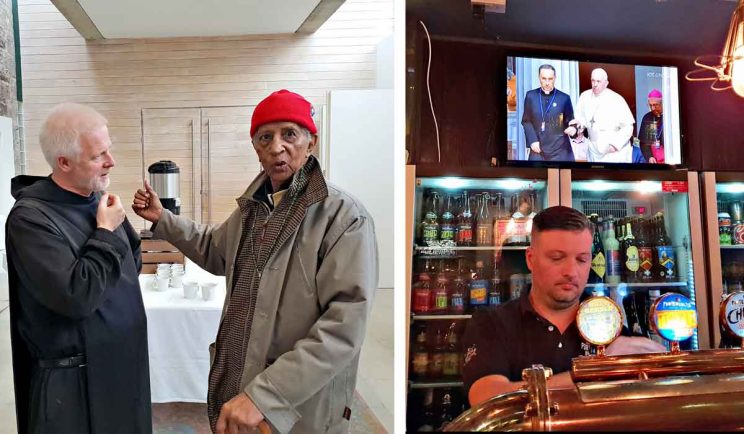 The joke question is whether Ireland will run out first of priests or of faithful. Clearly, the priesthood is diminishing at a faster rate.

And the identification of the people with the Catholic Church may yet rebound over generations, as the Church changes, old wounds heal, and the pervasive domination which the Church exercised over public life in the past is forgotten, and people look to return to Christ and tradition.

But by then, will there still be priests? That is a question which is exercising Ireland’s Church leaders. Already there are parishes run by priests from countries where the call to vocation is still being heard.

For example, in Kildare — named after the Church of Oak founded by St Bridget in the 5th century—we had Mass in the White Abbey, a historic church now run by Carmelites from India.

While we were in Ireland, a conference was held about the future of parishes there. Bishop Michael Wüstenberg, retired of Aliwal North, introduced the conference to South Africa’s experience of Small Christian Communities. The former missions are now teaching the former missionaries about how to be Church in the 21st century.

Mass with the pope

The decline in enthusiasm also found expression in the disappointing number of people who attended the papal Mass at Phoenix Park, the huge common in Dublin.

Where in 1979 about a million people came to have Mass with Pope John Paul II at the same venue, hopes for the first papal Mass in nearly 40 years was an attendance of 400000. In the event, only 130000 turned up (according to the police; the Vatican counted, with a healthy dollop of optimism, 300000).

Let’s not be too disheartened by the fact of unmet expectations: getting together at least 130000 people in a metro of 1,4 million people in a country with a population of 4,8 million is quite remarkable in its own right. 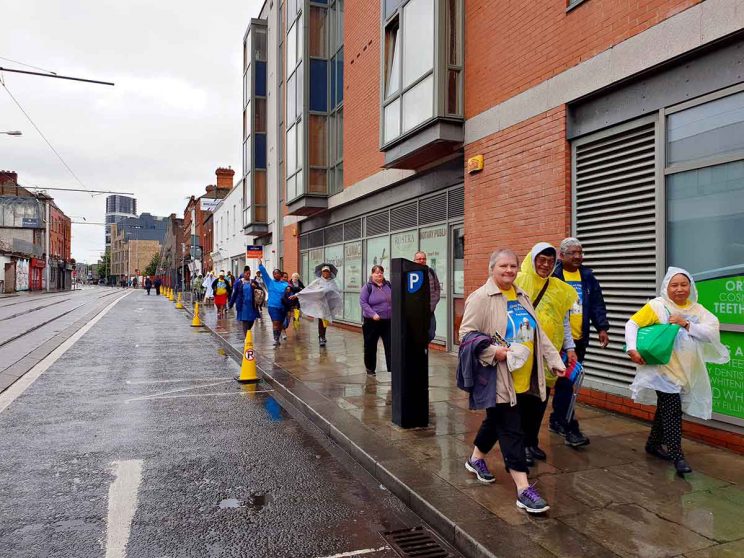 Pilgrims on their way to the papal Mass

And numbers were certainly diminished by the weather forecast, which predicted relentless rain and strong winds, and what promised to be difficult conditions in reaching the venue (at the last minute, the nearest tram station on our route was closed, giving us a walk of 6km to get to our allocated area).

The papal Mass was all-ticket, so no walk-ins were admitted. Many people likely ordered their tickets on speculation, deciding to stay home and watch the Mass on TV if convenience demanded it.

Indeed, we were worried about the weather too, and about the arrangements. Even having come all the way from South Africa to be there, I was not looking forward to getting drenched by too much rain, with tired feet from too much walking, and a sore back from too much queueing.

In the event, it barely rained, the organisation was fine, and with only a third of expected numbers turning up, we suffered no queues.

And the walk turned out to be quite lovely. From Smithfield station we passed houses with Vatican and Pope Francis flags hanging out of their windows, and churches decorated with yellow-and-white buntings.

As streams of other papal Mass-goers converged with our route, there was a festive mood of animated expectancy. And the walk on the broad boulevards of Phoenix Park was agreeable (at least for those with the faculties and stamina to handle it).

We also had left early, so as to secure good places to see Pope Francis close-up as he was driven in the popemobile through the Mass site. 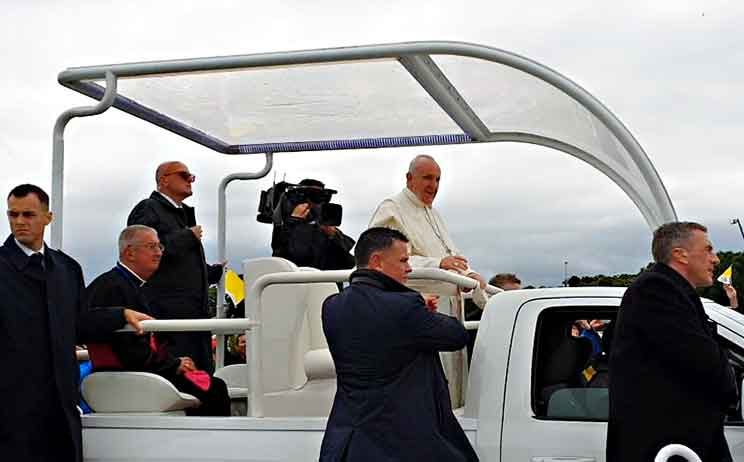 Pope Francis drives through Phoenix Park in Dublin before the papal Mass. The Southern Cross group had a perfect view

We occupied prime spots at the back of our allocated paddock, having worked out that Pope Francis would pass on that side. When he came — always a spine-tingling moment — we were just a few metres away from him.

The Mass was impressive. It is very special to receive the Eucharist which had been consecrated by the Vicar of Christ himself.

So it was all the more disconcerting to see, during the consecration, one man returning from the refreshments area armed with a milkshake. During the celebration of the Eucharist!

I had seen something similar when St John Paul II celebrated Mass at Gosforth Park in Johannesburg in 1995. Surely refreshment stalls should be instructed to close for the duration of the Mass!

At the Mass and at other events on his brief visit to Ireland, Pope Francis strongly condemned sexual abuses in the Church and — with less clarity and force than I’d have liked — their cover-ups by Church officials.

On other occasions, the pope has also called for the eradication of clericalism, which is at the root of the culture of silence and cover-ups. His anti-clericalism message clearly has not yet infiltrated the world of papal ceremonies.

Bishop Phalana — who with our fellow pilgrims,  Frs John Shand and Peter Whitehead, had joined the clergy at the papal altar — later told me that priests and bishops and cardinals were segregated as they were allocated their respective modes of transport from the congregation point to Phoenix Park. 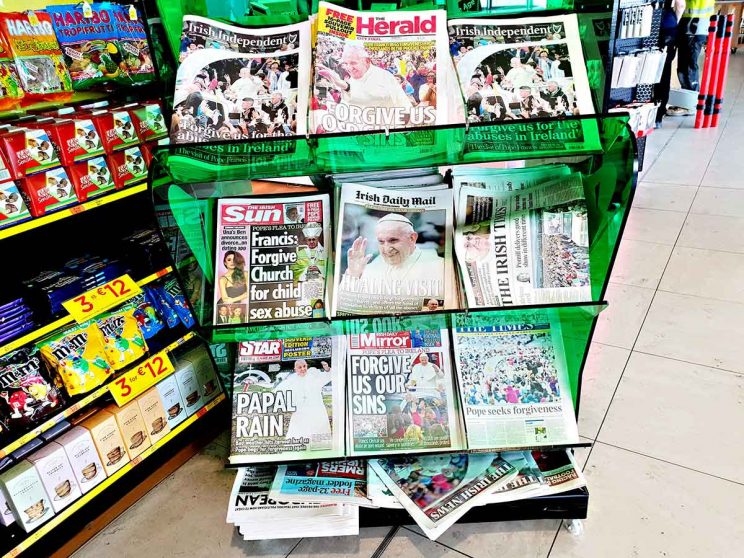 After the papal Mass in Dublin, all the Irish daily newspapers led with his apology for abuses and their cover-ups.

Presence of the Church

The papal Mass was the penultimate event of our pilgrimage which had seen us visit the Marian shrine of Knock, Croagh Patrick, Galway, Glenstal and Kylemore abbeys, the Rock of Cashel, St Bridget’s Well, the Cliffs of Moher, Kildare cathedral and other sites.

On our final day in Dublin we joined the locals for Mass at St Teresa’s in Clarendon Street, a Carmelite church with a rich history. It is unremarkable from outside but magnificent inside. Centrally-located, it’s said to be Dublin’s busiest church.

Our 11:30 Mass was well-attended (as was the morning Mass we had joined in Galway cathedral earlier). The church offers six Masses a day, aside from public devotions and various community outreach programmes.

The Church in Ireland is not irrelevant. On the day after the papal Mass, every newspaper carried Pope Francis on its front-page. All led with the pope’s apology for the abuse scandal. And all respected the pope for it.

The Church in Ireland is doubtless diminishing, but talk of its demise may be exaggerated. What is dying — maybe has died already — is that old all-powerful, dictatorial, clericalist Church. That Church has imploded, even if some are slow to accept that reality.

A new Church — smaller and less powerful but nonetheless present — is hopefully rising from the ashes of that old arrogant, calcified behemoth.

Next week: Pilgrims at Knock